The World Health Organization (WHO) is the lead specialized agency for international health.  However, the WHO’s resources have never matched the problems its member states task it to address. New global health challenges—including HIV/AIDS, pandemic flu, and noncommunicable diseases—have widened the gap between the agency’s mandate and capabilities.  Separately established initiatives, institutions, and partnerships have challenged the WHO’s leadership in global health. Underfunded and overstretched, the WHO is unable to respond effectively to existing and anticipated global health challenges. 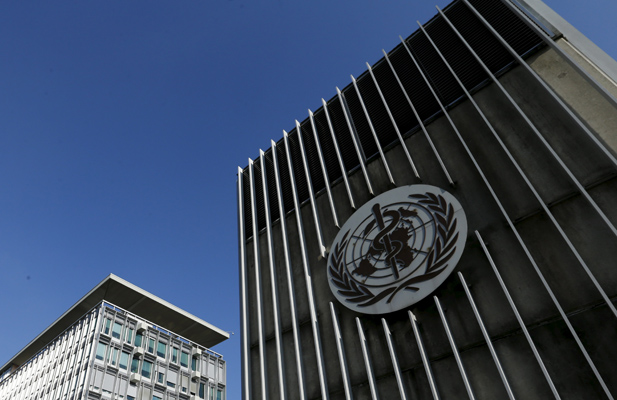 The organization’s widely faulted response to the 2014 Ebola outbreak underscored the need for profound changes. In a report commissioned by the WHO to assess its response, a group of independent experts concluded that the “WHO does not have the capacity or organizational culture to deliver a full emergency public health response.” The organization’s hobbled response to the Ebola outbreak was evidenced in its decision to withdraw its international team too soon from Guinea and Liberia, poor responses to requests for technical guidance from local health authorities, slowness in declaring the severity of the outbreak, and its failure to rapidly mobilize global assistance.

On the surface, the independent panel suggested, the WHO’s inept response was a result of “inadequate understanding of the nature of the outbreak, poor decision-making within the WHO, and over-deference to political considerations.” It highlighted the need to reform the organization’s internal management. A major concern is its lack of accountability. While the Ebola crisis led to the death of more than eleven thousand people, none of the WHO staff thus far has borne personal responsibility for the crisis.

The balance of staff skills is another challenge to management. An article published in Public Health journal found that of the one-third of the WHO staff deemed professional, nearly half are medical specialists, only 1.6 percent are social scientists, and 1.4 percent are lawyers. While doctors are crucial for the WHO to exercise its technical leadership, this staff composition means that the organization does not have the capacity to understand local traditions and culture, manage international relations, and perform some of its core functions such as creating rules and principles for global health.

With only 30 percent of its budget under WHO control, the organization’s agenda is guided by donor priorities.

The WHO’s faltering response during the outbreak also stems from its ineffectiveness in reforming its programs and how it sets priorities. With an operating annual budget of about $2 billion, which is one-third that of the U.S. Centers for Disease Control and Prevention (CDC), the WHO has identified six program priorities: communicable diseases, noncommunicable diseases (NCDs), promoting health through the life course, health systems, and corporate services/enabling functions. On the one hand, these functions replicate efforts of other international agencies or initiatives, such as the Global Fund to Fight AIDS, Tuberculosis and Malaria; UNICEF (children’s health); the World Bank (health system strengthening); and the UNFPA (reproductive health).  On the other hand, they create a zero-sum game in budget-related decision-making, sustaining the boom and bust budgeting cycle for WHO emergency response. The WHO’s 2014-15 biannual budget saw a 21 percent increase in program funding devoted to NCDs. However, only 5.7 percent of its 2014-15 budget was devoted to outbreak and crisis response, representing a 51.4 percent drop from what had been provided in the previous two-year budget. Badly weakened by budget cuts, the WHO’s outbreak and emergency response units were curtailed to such a level that the unit devoted to the science of pandemic and epidemic diseases had only one technical expert on Ebola and other hemorrhagic diseases. 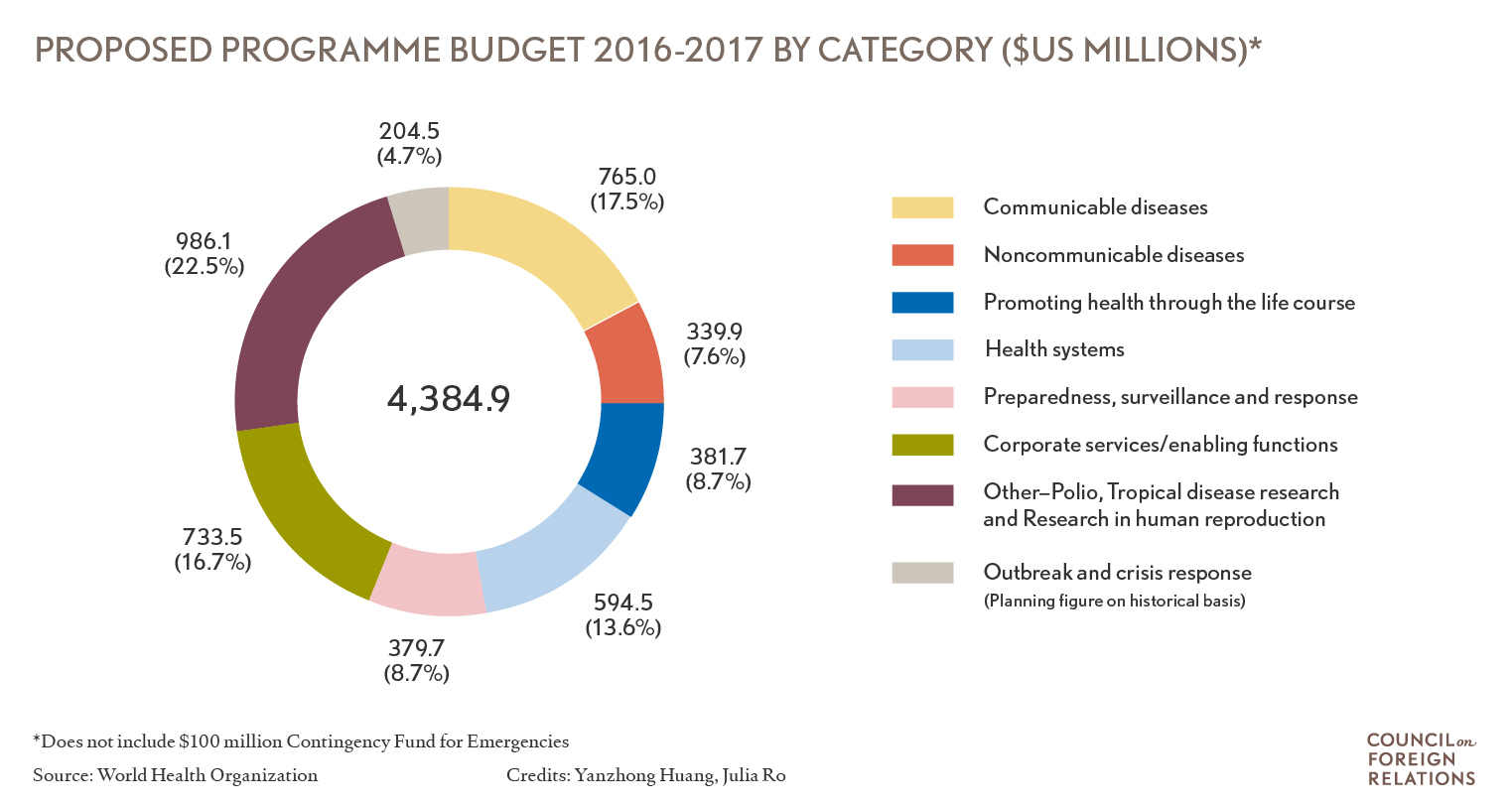 The organization’s ability to set and meet new priorities is hampered by its governing structure. The WHO is a member-run organization in which every country has a vote in its supreme decision-making body (the World Health Assembly or WHA), but member states’ priorities are often in conflict with major donors that are in control of different resources, such as the U.S. government and the U.S.-based Gates Foundation. Due to inadequate funds from the assessed contributions of its member states, the WHO has become dependent on voluntary or earmarked contributions allocated according to donor interests. With only 30 percent of its budget under WHO control, the organization’s agenda is guided by donor priorities. More than 17 percent of its 2014-15 program budget, for example, was allocated for polio eradication, a top priority of the Gates Foundation, a chief donor. This fragmented and franchised financing structure has also led to the use of the WHO’s regular funding to subsidize outside funding for special projects (because much of the earmarked funds are not allowed to include overhead). Misplacing confidence on rapid mobilization of external funds in an international health crisis only delayed the WHO’s surge capacity in responding to the Ebola outbreak.

Many of these financing and governance problems stem from the WHO constitution that entered into force in 1948.  Under the constitution, the WHO is run by the member states, which are represented primarily by health ministers who are typically bureaucratically weak; many important decision-making roles in relation to WHO reform today go beyond their remit. The member state-driven decision-making process also does not do justice to the emergence of a complex web of “transgovernmental networks” where nation states are no longer the sole important actors in addressing global challenges. Also, the WHO constitution grants regional offices (the intermediate bureaucratic layer between WHO headquarters in Geneva and its country offices) significant autonomy in the policy process. Such an institutional setup makes it difficult to align the regional and country offices closely with overall WHO strategies and priorities. Because WHO regional directors are appointed by governments in the region, their allegiances are to the region rather than to the headquarters in Geneva.  It was reported that during the Ebola outbreak, pressures from the government of Guinea, which feared the domestic consequences of prematurely declaring the outbreak a public health emergency of international concern, led the regional office to initially downplay the seriousness of the problem to Geneva and even withhold information about new infections. Moreover, the constitution places a premium on geographical basis and the internationally representative character of staff recruitment, which often leads to an opaque and inward-looking appointment process that places less focus on competencies and qualifications related to WHO’s core functions. Despite these institutional setup problems, making changes to the constitution is very difficult. Article 60 of the constitution states that WHA decisions on important questions, including amendments to the constitution, must be made by a two-thirds majority of the members present and voting.

That said, the constitution also leaves much room for reforming the organization. Article 18, for example, authorizes the WHA to invite civil society organizations and other stakeholders to participate in WHO governance and reform. In particular, it legitimizes proposals to establish a Committee C in the WHA. Different from the existing two WHA committees (A and B), which deal predominantly with program matters and budget/managerial concerns, a third committee could focus on debating major health initiatives among other, nonstate key players in global health governance.

Who Will Lead Reforms?

The issue is thus not so much about structural or institutional constraints as it is about the dearth of bold leadership in WHO reform and decision-making. Member states, which help shape the WHO’s priorities and resources and the secretariat’s mandate, are to blame for not providing the secretariat the necessary authority and resources to push reforms forward.  They shot down proposals to create Committee C or host a multi-stakeholder World Health Forum. In May 2015, they also rejected WHO Director-General Margaret Chan’s proposal to increase assessed contributions by 5 percent to ensure the full financing of the budget. As the leading donor in global health and the source of WHO’s largest assessment contribution, the United States government could be a lead catalyst in the WHO reform process. Yet it is often hesitant to take such a role.

The United States government could be a lead catalyst in the WHO reform process. Yet it is often hesitant to take such a role.

But the WHO secretariat is equally to blame for its lack of transformational leadership. Unlike other international organizations such as the World Bank, the WHO often cedes its leadership in agenda setting to major funders, allowing them to cherry pick projects for implementation. Laurie Garrett also noted in an article in Foreign Affairs that Chan “seemed to defer too much to national governments’ wishes and agendas, even when they were in conflict with the organization’s primary mission.” Prior to the Ebola crisis, the WHO leadership had failed to act on the proposal of an independent pandemic review committee to establish a rapid-response contingency fund. Described by Chan as a “technical agency” heavy on technical know-how but light on logistical muscle, the organization in the response to Ebola was largely sidelined by a separate UN response team and member states such as the United States.

Beginning in January 2015, the WHO added emergency capacities as a new field of reform. Focusing on consolidating the resources and capabilities of WHO work in outbreaks and emergencies, the emergency reform aims to build “one single Programme, with one workforce, one budget, one set of rules and processes and above all one clear line of authority.” In the absence of reforming the underlying institutional and structural problems, however, it is unlikely the organization can regain the world’s confidence in its leadership over global health. It is worth noting that the WHO has at times been at the forefront in leading timely global health initiatives, such as the response to SARS in 2003 and in negotiating the Framework Convention on Tobacco Control the same year.

Unfortunately, the Ebola crisis has not spurred fundamental change in the WHO management, governance, or financing structures. While Chan has admitted that the outbreak “shook this organization to its core,” she views the secretariat as “servants” to member states and prefers to wait for consensus from them before taking any further action. No far-reaching reform measures have been unveiled to tackle the root causes of the problem, namely, organizational ineffectiveness, a lack of clarity in priorities, and insufficient funding.

In May 2017, the sixty-ninth WHA will meet to elect a new director-general. In light of its sustaining financing and governance challenges, it is widely believed that the 2017 WHO leadership transition will be critical. As Lawrence Gostin and Eric Friedman wrote in the Lancet in October 2014: “Global health leadership can be built, but only if genuine leaders choose to build it.” The new director-general will need to have the experience, skills, and leadership to work with member states and other stakeholders to tackle the WHO’s structural and institutional gaps and steer the agency in a direction that can make it a true guardian of health around the world.