Skip to main content
How to Save Electronic Cigarettes

There is a nicotine delivery product on the U.S. market that comes in fun flavors like "Cinnamon Surge" and "Fruit Chill." Its advertisements can be found everywhere from glossy magazines and social media to NASCAR driver Jeff Gordon’s car. You can buy this product on Amazon.com without verifying your age or paying cigarette taxes, and use it freely in restaurants or the office.

That product is Nicorette gum, and there is little debate about the manner in which it is sold, advertised, or used. Yet another, more popular way for consumers to get their nicotine—electronic cigarettes, also known as e-cigarettes—is the subject of a bitter debate over its regulation. This debate threatens the long-term potential of e-cigarettes to make traditional cigarettes obsolete and improve the health of millions of Americans.

Opponents of e-cigarettes have argued for strong restrictions on their sale, use, and marketing, saying the technology is new and its health risks not yet known. These opponents fear that e-cigarettes will perpetuate nicotine addiction by skirting rules—taxes, advertising and flavor restrictions, and bans on public use—that halved U.S. smoking rates over the last fifty years, from 42 percent to 18 percent. 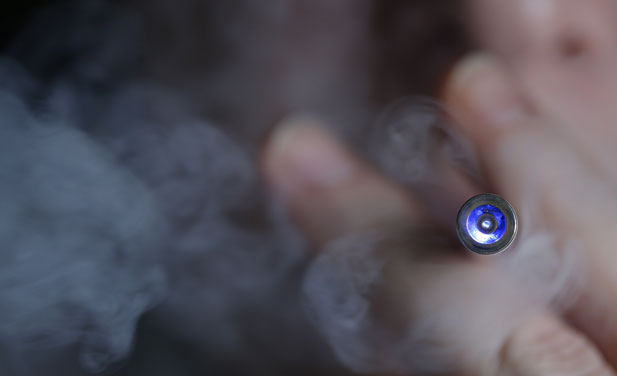 Proponents of e-cigarettes oppose the heavy regulation of these products, maintaining that the unknown risks, whatever they prove to be, will never exceed the known risks of traditional cigarettes. These proponents point out that e-cigarettes use nicotine, but not tobacco, which, despite the U.S. crackdown on smoking, remains the number one cause of preventable death in this country.

Cigarette smoking causes an estimated 443,000 deaths each year in the United States, including nearly 50,000 deaths from secondhand smoke. E-cigarette proponents fear that U.S. Food and Drug Administration oversight could hinder the emergence of new e-cigarette companies and innovative designs that could better appeal to adult smokers looking to quit tobacco cigarettes.

A drug or tobacco product?

Nicorette and nicotine patches, like e-cigarettes, do not contain any tobacco and are regulated under drug and device rules in the United States. Understanding why e-cigarettes are not regulated this way requires a bit of history.

E-cigarettes were invented in 2003 by a Chinese pharmacist who lost his father to lung cancer. Most e-cigarettes are still manufactured in China, although often under the direction of U.S. and European companies. When the first shipments of e-cigarettes began arriving at U.S. ports in 2007, the U.S.-based importers—two small companies—successfully sued to have them classified as tobacco products rather than drugs or devices, which would have prevented their immediate sale. The designation stuck. Under the regulations that the FDA proposed last month, e-cigarettes will be considered tobacco products.

The designation as tobacco products allowed the independent companies and entrepreneurs that once exclusively sold e-cigarettes to get an early and fast-expanding foothold in the U.S. market. Yet, that designation also has profound implications for that industry and the viability of e-cigarettes as a disruptive technology that some hope could finally displace and eradicate smoking.

Under current U.S. law, an e-cigarette company cannot make claims regarding the health benefits of its product, such as how much it helps you stop smoking, without that product being regulated under drug and device rules instead of as a tobacco product. Therefore, e-cigarette companies in the United States have no incentive to invest in research and design improvements to get people to stop smoking, because those potential benefits cannot be marketed to consumers.

Instead, e-cigarette companies compete against each other and with the tobacco industry on the ability to use their products in ways that smokers can no longer use cigarettes—in appealing flavors, with fewer odors, excise tax-free, and in public places. U.S. e-cigarette ads don’t offer better health or help quitting; they promise smokers the chance to take their "freedom back" and the opportunity to use them in bars and at basketball games. That promise of freedom and a product that looks and feels like a cigarette has been a winning combination. U.S. e-cigarette sales have doubled every year since 2008 and are projected to reach $2 billion this year. 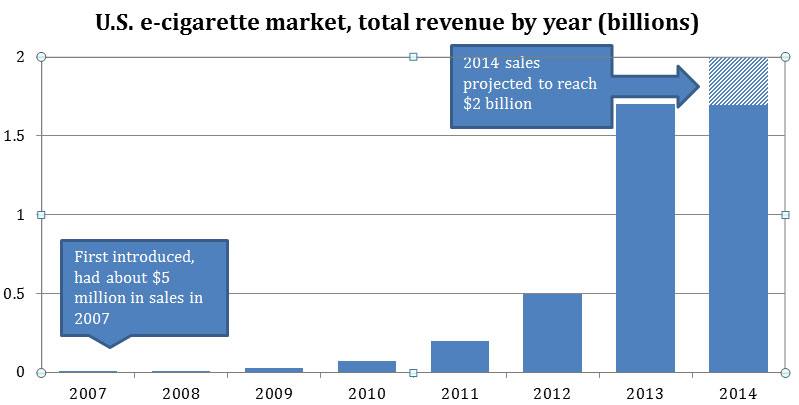 Adapted from Bloomberg.com, based on UBS, Wells Fargo data.

Yet freedom is proving fleeting for e-cigarette users. With concerns rising over the unknown risks of e-cigarettes, three U.S. states and 170 municipalities, including New York City, have recently banned the use of these products in offices and public places where cigarette smoking isn’t allowed. A recent Senate report condemned the use of flavors like gummy bear and strawberry to sell e-cigarettes, and FDA officials have publicly intimated such flavors may be prohibited in the future. Minnesota has imposed the same taxes on e-cigarettes as on traditional cigarettes; North Carolina is considering also doing so. More states will likely follow, given their dependence on cigarette taxes.

As these regulations and taxes take hold, the competition over e-cigarettes will narrow to become solely about meeting and growing consumers’ demand for nicotine. That is a competition the tobacco industry will win. It has decades of experience building brands and attracting new users, and can leverage its extensive distribution and retailer networks. In just two years after acquiring an e-cigarette manufacturer, Lorillard grew its brand, Blu, from a 25 to 50 percent share of the U.S. e-cigarette market. The other big U.S. tobacco companies aren’t far behind with acquiring and introducing their own e-cigarette brands.

If e-cigarettes are regulated as a tobacco product, they will become more like tobacco and less like the disruptive alternative many hope. Tobacco and e-cigarettes will be made and sold by the same few big companies and subject to the same tough tax, use, and advertising restrictions. Cigarette companies have little incentive to undermine their existing brands and investments. One tobacco industry analyst recently compared e-cigarettes to energy drinks: a high margin, fast-growing product class that shifted the preferences of some customers and attracted others, but hardly transformed the beverage industry.

More regulation for freer use

If regulated under drug and device rules, e-cigarettes and independent e-cigarette companies could maintain their competitive advantages over traditional cigarettes and the big tobacco companies that sell them. Manufacturers would have an incentive to invest in the research and design innovations that help smokers quit traditional cigarettes. Bans on public e-cigarette use and flavorings could be reversed with better evidence of health benefits that resulted from that research. High cigarette taxes would likely be inapplicable. E-cigarettes could become subject to Medicare and insurance reimbursement, which would expand their use, particularly among low-income smokers.

The benefits from regulating e-cigarettes under drug and device rules, however, are an all-or-nothing proposition. Consumers and bar and restaurant proprietors cannot be expected to inspect and distinguish between the brands of e-cigarettes that have been approved for smoking cessation and public use from the brands that have not.

The costs of this regulatory change would be less burdensome than some think. Refined nicotine is not new; e-cigarette devices are. The costs of obtaining regulatory approval for such medical devices are considerably lower than for a novel drug. In contrast to the U.S. tobacco industry, which three huge companies dominate, there are more than 6,500 U.S. medical device companies, mostly small and medium-sized enterprises. Most medical devices are unpatented, compete on frequent innovation cycles, and are subject to far lower excise taxes than cigarettes.

In the 1980s, when the FDA approved the first nicotine delivery devices—patches and gum—a moratorium on direct-to-consumer pharmaceutical advertising existed, which lasted for a decade. Smokers’ uptake of these devices suffered and, with only modest sales, investment in improvements lagged. That needn’t happen again. As anyone who reads magazines or watches television can tell you, the U.S. ban on direct-to-consumer advertising is long over. E-cigarettes are already popular.

Why Congress should act

In 2008, the U.S. court that blocked oversight of e-cigarettes under drug and device rules indicated that if Congress preferred a different outcome, it should so decree. It is past time that Congress take up that invitation.

The popularity of e-cigarettes presents an enormous opportunity for public health, which we are at risk of squandering. The answer to the debate over e-cigarettes is not more regulation versus freer use, but more regulation for freer use. Congress should amend the law to subject all nicotine delivery devices that do not contain tobacco to U.S. drug and device rules, and soon.