Skip to main content
India Warms Up to Climate Action

In October 2015, India unveiled a comprehensive strategy to curb its greenhouse gas (GHG) emissions and reduce its vulnerability to a changing climate. Climate advocacy groups hailed the document—which in the parlance of international climate negotiations is known as India’s Intended Nationally Determined Contribution (INDC)—because it signaled a historic shift in India’s stance on climate action. Altogether, 185 countries have now submitted INDCs, accounting for nearly 90 percent of global GHG emissions and raising hopes for a successful accord at the UN climate talks being held in Paris at the end of 2015.

But some analysts caution that such optimism is unfounded. The pessimist’s take is that India, the world’s third-largest GHG emitter behind China and the United States, has committed to little more than business as usual. Despite ambitious commitments, for example to rapidly deploy renewable energy sources, India’s emissions are set to more than double by 2030 as the country burns more coal to fuel a growing economy. Left unchecked, India’s annual GHG emissions could be the highest in the world by 2050. 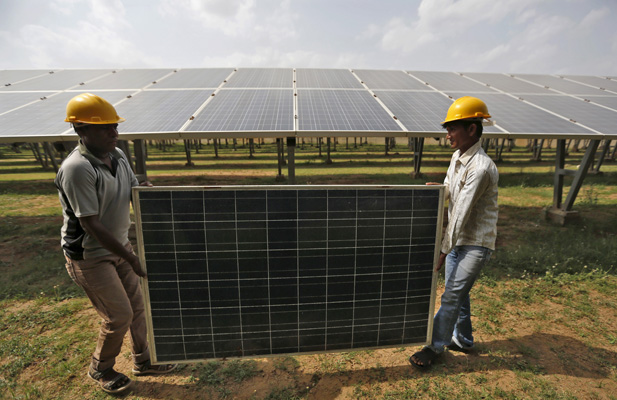 Workers carry a photovoltaic panel at a solar power plant in the Indian state of Gujarat in July 2015. (Photo: Amit Dave/Reuters)

It is still too early to tell which story—the optimist’s or the pessimist’s—is right. Prime Minister Narendra Modi, now in his second year in office, has clearly signaled a break from India’s prior hardline stance against taking responsibility for mitigating climate change, recognizing that India itself could suffer acutely from its effects. But he has also stressed that India’s ability to act on climate is constrained by its needs as a developing country seeking to industrialize and expand affordable energy access.

Recognizing these circumstances, developed countries like the United States should welcome India’s progress in submitting an INDC and seek ways to help it ratchet up its efforts. For their part, Indian policymakers must understand that renewables like solar and wind are not a silver bullet for climate policy, and that it will take a broader portfolio of reforms to successfully transition to a low-carbon economy.

India’s climate policy is beset by an apparent paradox: if its INDC sets out highly ambitious targets, why will its future emissions grow faster than those of every other major emitter in the world? The answer is that India is starting from a relatively low point: today, its per capita emissions are only one-third the global average. As its economy expands by more than 7 percent a year, India’s emissions will quickly grow and soon approach the global per capita average. Because carbon emissions from developed countries have historically increased as their economies industrialized, international pressure on India to cap and ultimately reduce total emissions can appear to Indian policymakers as a threat to its pursuit of affordable energy, and thus its economic development.

This dynamic explains India’s historical resistance to reducing its own GHG emissions, especially on a unilateral basis. When it ratified the 1997 Kyoto Protocol, an international treaty mandating that developed countries reduce their GHG emissions, India embraced the principle of “common but differentiated responsibilities,” arguing that developed countries should bear most of the burden of combating climate change. And the Modi administration continues to stress that more than 400 million citizens are underserved by, or lack access to, the electricity grid. As the government contends in the INDC, increasing per capita energy consumption is crucial “to provide a dignified life to its population and meet their rightful aspirations.” 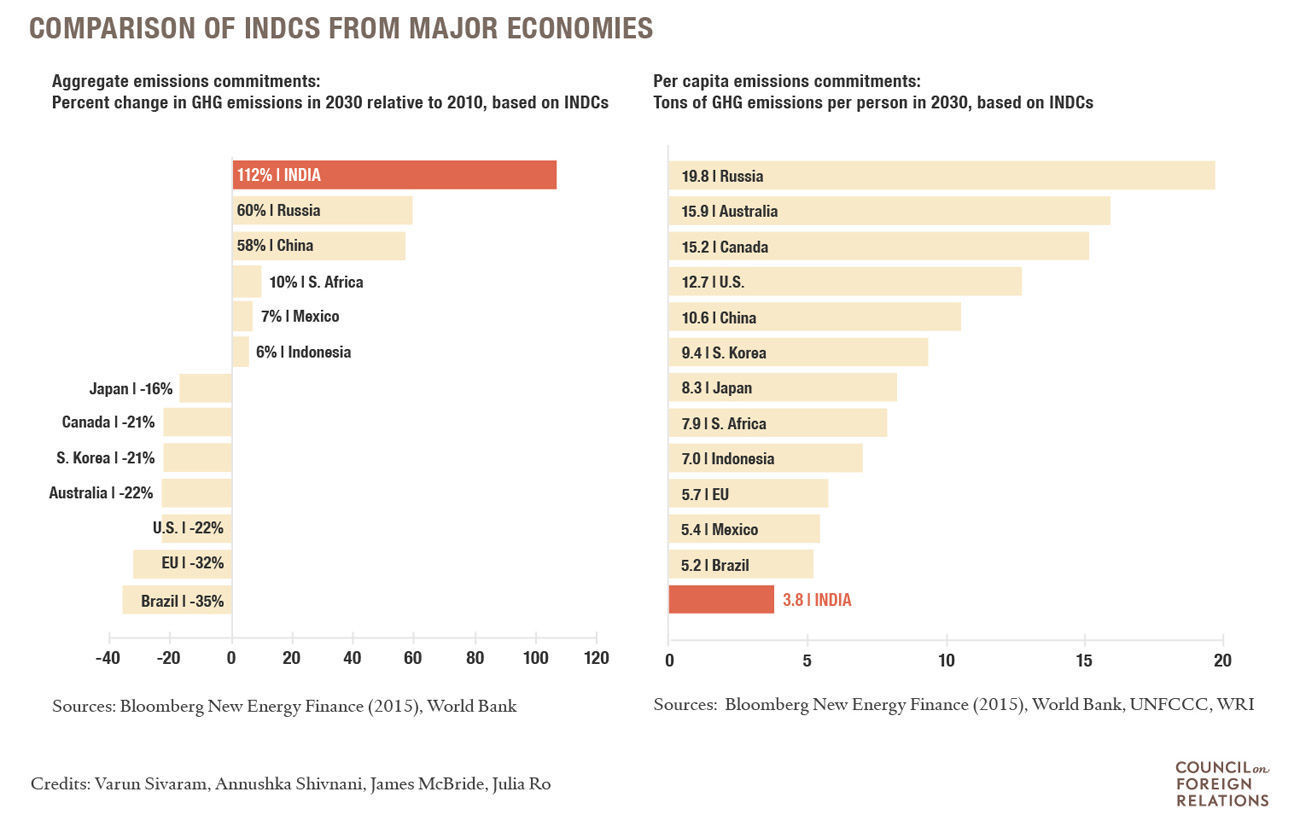 Nonetheless, over the last decade India has shifted its stance on climate policy. In 2008, under the prior administration of Prime Minister Manmohan Singh, India launched the National Action Plan on Climate Change. In parallel with its domestic efforts to curb its emissions, India agreed to a non-binding international commitment to reduce their intensity (as measured by emissions per unit of GDP) by 20 to 25 percent below 2005 levels by 2020.

When Modi took office in 2014, he swiftly increased the ambition of India’s various climate initiatives. Most notably, he quintupled the previous administration’s target for solar power to 100 gigawatts (GW) and targeted 175 GW of total renewable energy capacity by 2022—roughly ten percent of India’s overall electricity consumption. But importantly, the government’s submission of an INDC marks the first time India has expressed its openness to a legally binding emissions commitment. After more than two decades, India under Modi has accomplished a significant shift in its stance on climate.

An ’Ambitious but Achievable’ INDC

In its INDC, India outlines a suite of actions related to curbing the growth of its emissions (known as climate change “mitigation”) and to preparing for the likely effects of climate change (or “adaptation”). The Modi administration has called its commitment “ambitious but achievable,” but it cautions that the price tag of the entire INDC—including public and private sector investment—could be $2.5 trillion by 2030, far exceeding the resources of India’s government and domestic investors. As a result, India contends that successfully achieving its goals will require financial assistance and technology transfer from developed countries.

The vast majority—80 percent—of the projected expenses arise from the plan’s mitigation commitments. To curb India’s GHG emission growth, the Modi administration has committed to reduce its emissions intensity by 33–35 percent below 2005 levels—principally through deploying renewable energy and also by improving the energy efficiency of its industrial sector. The INDC also sets a target for a carbon dioxide “sink,” or capture through additional forest and tree cover.

Of all of its mitigation commitments, renewable energy is clearly the most important for total emission reduction. In fact, because solar power is expected to account for nearly three quarters of all renewable energy by 2030, solar alone could deliver greater reductions than the forestation and energy efficiency initiatives combined. 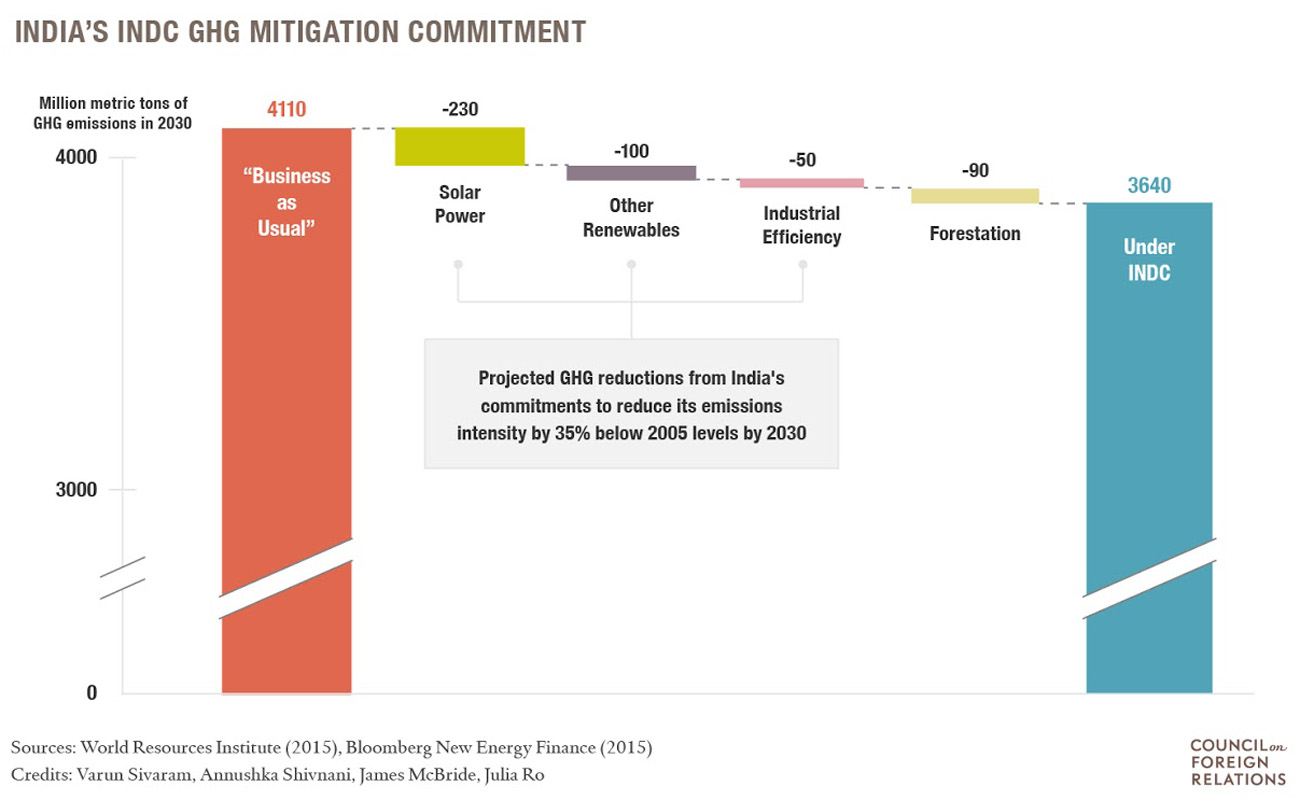 India’s INDC also emphasizes the need for adaptation measures. India is particularly vulnerable to the effects of climate change, which include extreme heat, prolonged drought, and changing rainfall patterns that could disrupt agriculture, spread disease, and lead to climate refugees. In response, the INDC outlines a series of investments to prepare for disasters and improve the resilience of agriculture, water resources, glacier and coastal regions, and human health systems.

The INDC emphasizes that since domestic financial resources will be insufficient, foreign financing will be essential. At the Paris negotiations in November and December 2015, India is expected to lobby strongly for developed countries to live up to a commitment they made at an earlier major round of talks, in Copenhagen in 2009, to provide $100 billion per year by 2020 to a Green Climate Fund for developing countries. Moreover, India’s INDC stresses the need to transfer clean energy technology from abroad, controversially insisting that these technologies be stripped of intellectual property rights to enable developing countries to deploy the technologies at low cost.

India’s INDC submission is, properly understood, just a starting point for future progress. Components of the plan, especially its renewable energy targets, are genuinely ambitious and will require significant domestic and international resources to accomplish. But even if India meets those targets, by 2030 more than three-quarters of its electricity will still come from fossil fuels—and more than half of its emissions will come not from electricity, but from transportation and industry, where solar and wind power will not reduce emissions.

Therefore, India will need a broad portfolio of new energy technologies to transition to a low-carbon economy. Coal, which accounts for 70 percent of India’s current GHG emissions, will continue to dominate India’s energy mix. Recognizing this, increasing the efficiency of India’s coal power plant fleet to reduce emissions per unit of energy produced must be a priority. Moreover, India could increase its use of natural gas, which produces only half the emissions of coal, in order to reduce emissions from the power sector, as well as the industrial sector, where coal currently dominates.

India will need a broad portfolio of new energy technologies to transition to a low-carbon economy.

The Modi administration is right to insist that India cannot accomplish a low-carbon transition alone, especially given the urgency of improving energy access and maintaining breakneck economic growth. International actors can support India’s transition in several ways. Development banks like the World Bank and the Asian Development Bank have already pledged resources to support renewable energy. By following through on those commitments, as well as offering lower-cost loans for clean energy projects, they can embolden foreign investors to finance clean energy in India.

At Paris, the United States and other advanced economies can also directly aid India’s efforts. A recent CFR Independent Task Force report on U.S.-India Relations recommends that the United States pursue bilateral and multilateral support for cleaner coal—including more efficient power plants as well as infrastructure to capture and sequester carbon emissions—just as it has provided incentives for renewable energy deployment. Indeed, pledges from developed countries, including to the Green Climate Fund, could enable India to invest in a range of low-carbon options. Such resources are also badly needed to help vulnerable countries like India shoulder the high costs of “adaptation” measures to deal with unavoidable repercussions of the climate change that is already underway.

However, there are also steps that India must take domestically to enable such international assistance. First, policymakers need to focus on improving India’s power utilities. Because utilities tend to mismanage and underinvest in the electricity grid, more than a quarter of generated power in India is lost before it even gets to consumers. Additionally, insolvent utilities can discourage both domestic and international investors from building clean energy projects. By modernizing the sector, the country will be better positioned to increase renewable energy deployment and decrease emissions from coal.

Second, India must respect intellectual property rights if it expects successful diffusion of clean energy technology. Unlike in the pharmaceutical sector, where developing countries can face higher prices for brand name versus generic drugs, honoring international patents is unlikely to drive up the cost of clean energy products, which face competitive pressure from fossil fuels. Instead, foreign companies that are secure in their intellectual property protection are more likely to set up local manufacturing, create jobs, and seek to deploy affordable clean energy to attract consumers.

The submission of an INDC is a major step forward for both India and global climate efforts, but these difficult decisions await beyond this year’s Paris conference. Achieving effective climate policy in India is a global challenge—and one that, if surmounted, could bring global benefits. India’s initial commitment to the climate talks should raise hopes that more progress, domestic and international, is on the horizon.