President Barack Obama in his State of the Union speech reiterated his call for a bipartisan agreement that would stabilize the debt and end a period where fiscal policy has lurched from crisis to crisis.

More From Our Experts
James M. Lindsay
Ten Anniversaries to Note in 2023

This ambition is broadly shared, but profound disagreements remain over the composition of measures to address debt and growth. Democrats insist on a "balanced package" that includes substantial new revenue and modest changes to entitlements. Republicans see the fiscal problem primarily as a spending problem and want deep and broad-ranging cuts. Prospects for a major agreement, a "grand bargain," seem as remote as ever.

Despite the brinkmanship on display to date, some progress has been made on cutting the deficit. But a series of upcoming fiscal deadlines highlights the serious challenges facing the economy and the real prospect of a crisis down the road.

By extending and making permanent the Bush rates for 98 percent of Americans, it avoided an abrupt fiscal contraction that would have pushed the United States back into recession. It did not, however, deal with the debt limit or address the full sequester. Consequently, it created new cliffs and left work to be done.

Taking the fiscal cliff deal into account, and assuming currently legislated cuts are allowed to go into effect, the nonpartisan Congressional Budget Office estimates that the deficit for fiscal year 2013 will be $845 billion, which would mark the first time in five years that it has fallen below $1 trillion. This would stabilize the debt until the middle of the decade, before rising entitlement spending and interest payments again cause the debt ratio to rise.

More From Our Experts
James M. Lindsay
Ten Anniversaries to Note in 2023

Where Do We Go from Here?

The table below highlights the near-term deadlines for fiscal policy.

The next immediate challenge is the sequester. This refers to $1.1 trillion in cuts over ten years ($110 billion per year) mandated by the failure of the 2011 "super committee" and scheduled to begin in January 2013. The fiscal cliff agreement replaced two months of this year’s cuts, leaving around $85 billion in budget authority to be cut from the defense and a broad range of non-defense programs on March 1. These cuts alone would represent an additional fiscal drag of 0.8 percentage points of GDP.

While most agree the sequester should be replaced or spread out to mitigate the effects on the economy, the two sides are far apart on what those offsetting cuts should be. The president has called for a 1:1 ratio of spending cuts to revenue. The revenue could come from closing a variety of loopholes, including offshore tax shelters, ending the "carried interest" tax advantage for investment funds, and taxing stock options more heavily. Absent a broader deal, the White House has signaled interest in another short-term buy-down of the sequester while negotiations continue.

Meanwhile, Republicans have insisted on a non-defense, cuts-only package. Given the wide gulf between the two sides, it’s unlikely that a deal can be achieved by March 1, meaning that the sequester would go into effect, at least temporarily.

Next up is a continuing resolution to fund the government from March 27 through the end of September. Negotiations would need to address whether to lock in spending at post-sequester levels, or to restore those cuts. Given strong sentiment in the House for cuts, it’s hard to believe that the sequester could be repealed without offsetting measures. Given weak growth, it would be best if the sequester was restored and replaced by offsetting measures in the out years. Failing that, the cuts could be more broadly spread or pushed back to allow affected agencies to adjust. The reaction of markets, and of the public more generally, could be decisive in how this drama plays out.

If a continuing resolution is not agreed upon by March 27, the government would shut down right away. There have been seventeen government shutdowns since 1976. Most have been short (the longest was twenty-one days, in 1986), and their economic impact was modest. Essential personnel and operations continue during the shutdown, and entitlements continue, so the shutdown (or "funding gap," in budget speak) affects only about 20 percent of all government spending.

Under the "No Budget, No Pay" act signed by the president in February, each house of Congress must pass a budget resolution or their pay will be withheld. While the constitutionality of the pay restriction is questionable, it looks like it will have the intended effect of forcing the Senate in particular to pass a budget.

Senate and House resolutions will be strikingly different, each a reflection of the priorities of the party in charge. From there, the bills go to reconciliation, where they are likely to remain until the fall when the FY14 budget battle begins in earnest. Thus, the main effect of this provision is symbolic and political.

The No-Budget, No Pay act suspended the debt limit until May 18, at which point the limit would be reset at the new level of debt (an increase of $400-500 billion). If a further increase in the debt limit is not agreed on by then, Treasury would again invoke "extraordinary measures" to pay its bills. This would provide around two months of headroom before the debt limit became binding.

The decision to push back the debt limit reflected a judgment by Republicans that the debt limit was not effective leverage in negotiating spending cuts. This decision was welcomed by markets. From this perspective, short-term fixes for the sequester and the continuing resolution, without another debt limit increase, seem undesirable as it would again make the debt limit the nearest cliff.

As mentioned earlier, CBO projections suggest that, either because the sequester goes into effect or is replaced by comparable savings, the debt ratio is stabilized temporarily. Is this enough? One argument for pausing at this point is that, with the economy still recovering from the crisis and unemployment high, further fiscal consolidation should wait (and could be counterproductive by reducing growth). If other cuts are agreed, the savings could be used for growth-oriented investments in infrastructure, education and other critical areas. While I share the belief that investments in these areas would provide high returns given our deficits in these areas, I doubt that there is much scope for significant new spending initiatives, given our current political gridlock and the public’s loss of confidence in Washington’s ability to address the fiscal challenge.

In the State of the Union, Obama said his administration had achieved $2.5 trillion in deficit reduction through a mix of revenue and spending cuts. That still leaves $1.5 trillion in cuts--including through reforms to entitlements and revenue through tax reform--to achieve the $4 trillion target needed to stabilize the debt for the time being.

Arguments on the other side note the negative effects on the U.S. economy and politics from the perception that our deficit is unsustainable in the longer term. By the middle of the decade, an aging population and rising debt service would cause the deficit and debt to rise again. By CBO’s calculation, the debt ratio would rise from 72.5 percent of GDP currently to 77 percent in GDP by 2023 (see chart). Using this data, the Committee for a Responsible Federal Budget estimates that, on current policies, the debt will rise above 100 percent by the early 2030s. Various experts have suggested that a package of $2.4 trillion, including entitlement reform, would be needed today to put the debt durably on a downward path, and if we wait, this number will rise. At this point, while there have been bipartisan initiatives that have identified numerous programs for achieving this result, neither party’s political leadership have put forward a concrete package that gets us there. 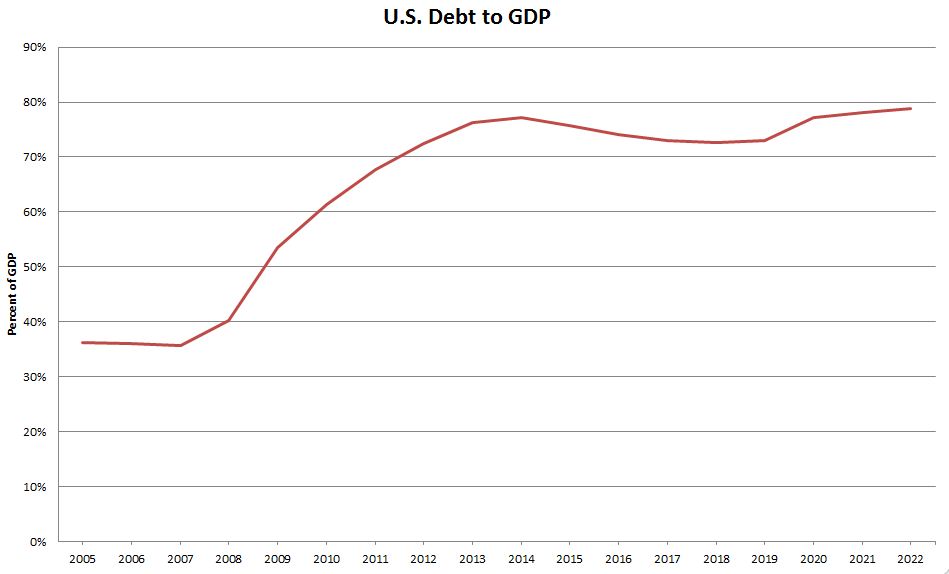 In the long run, this fiscal challenge is the real "cliff." Failure to address it will eventually lead to crisis. Confronting these challenges in a timely manner, rather than governing through a sequence of artificial deadlines and confrontations, promises substantial economic and political benefits, strengthening the U.S. economy as well as its standing in the world.