Skip to main content
Seven Big Summits to Watch in 2016

After seven arduous years, President Barack Obama no doubt dreams of sleeping in for a month of Sundays. Alas, there will be little respite for him in 2016. Beyond fighting legislative battles and containing international crises, the president and his colleagues will face an unrelenting schedule of global summits sure to test even the most ardent supporter of international cooperation—and the human capacity to handle jet lag. Here are seven of the most important international events in the coming year. The good news? The first two are in the United States. 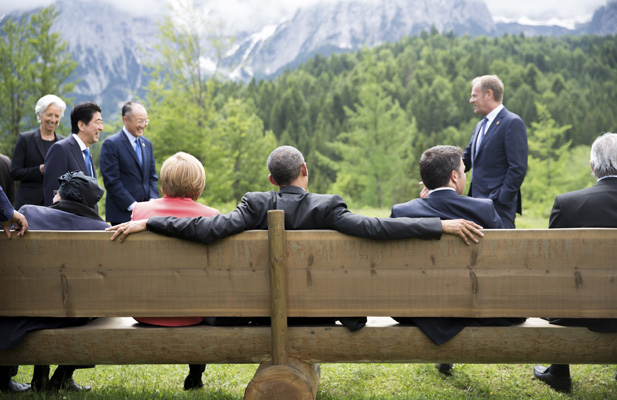 Leaders of the Group of Seven (G7) in Kruen, near Garmisch-Partenkirchen, Germany, at the forum’s 2015 summit. (Michael Kappeler/Pool/Reuters)

The calendar kicks off in early spring, when President Obama will welcome world leaders back for the final meeting of what is perhaps his signature foreign policy initiative, the biennial Nuclear Security Summit (NSS). The president launched the NSS to close a glaring gap in the nuclear nonproliferation regime: the presence of loose nukes and fissile material that could fall into the hands of terrorist groups or rogue states. As at the three previous meetings, four dozen countries and several international organizations will announce “gift baskets”—steps they have taken, independently and jointly, to reduce the vulnerability of their nuclear arsenals and facilities. Unfortunately, the NSS series is currently slated to expire when Obama leaves office. To cement his legacy, the president should work with foreign partners to give this ad hoc process a permanent institutional home, perhaps by transferring it (along with additional resources) to the International Atomic Energy Agency.

Three weeks after the NSS, the action will shift to New York, where the United Nations will hold its first special session on the global drug problem since 1998. Eighteen years ago, the slogan was “A Drug-Free World: We Can Do It.” Its focus was on prohibition, eradication, interdiction, prosecution, and incarceration. This year’s summit will be different: frustrated by the futile “war on drugs” and its attendant criminal violence, a number of national governments (particularly in Latin America and Europe) are experimenting with decriminalization and harm-reduction strategies. In the United States, Colorado, Washington, and a dozen other states are similarly turning to public-health approaches. Canada’s new Liberal government, meanwhile, is considering legalizing marijuana. The summit will test whether the reformist constituency within the United Nations extends beyond the Western Hemisphere and Europe.

The next month UN member states will convene in Turkey to address what the UN has called the greatest global humanitarian crisis since World War II. Today, more than sixty million people have been driven from their homes by violent conflicts or natural disasters, stretching the capacities of UN agencies and charities past their breaking points. The epicenter has been Syria, whose refugees are overwhelming Lebanon, Jordan, and Turkey, and testing the solidarity of the European Union. Millions of others have been displaced in Iraq, South Sudan, Yemen, Nigeria, Mali, and other hot spots, leading to unprecedented shortfalls in emergency assistance. In response, the UN is requesting a record $20 billion in humanitarian aid, five times the amount needed a decade ago.

In Istanbul, UN member states should rededicate themselves to abide by the asylum principles of the 1951 Refugee Convention, mobilize nontraditional donors (including the Gulf states and China) to fund the humanitarian appeal, and link humanitarian aid to longer-term development efforts in protracted emergencies. This is an ambitious agenda. Fortunately, UN member states will get a second opportunity to advance it in September in New York, where President Obama plans to host another high-level refugee summit.

The most exclusive summit on President Obama’s 2015 world tour will be in Japan, where leaders of the seven largest advanced market democracies, plus the EU, will gather on the island resort of Shima. The Japanese agenda for the summit, slated to be released in January, is likely to focus on gender equality and G7 support for the UN Sustainable Development Goals. But, as in past years, the symbolism of the gathering will be as important as anything in the communiqué.

The G7’s main value for its members is their like-minded commitment to preserving the open, rule-bound international order that the West established under U.S. leadership after 1945. Today, that order faces its greatest test from the leading authoritarian powers, Russia and China. For the third consecutive year, the G7 will meet without Russia, which was suspended indefinitely from the G8 after its invasion of Crimea in a symbolic rebuke for violating a fundamental norm of world order: the territorial integrity of a UN member State. The Shima summit will allow Japanese Prime Minister Abe to send an analogous signal to China that it should restrain its own territorial ambitions—and that Japan has powerful friends to turn to if Sino-Japanese relations deteriorate.

Three months later, those same G7 leaders will find themselves across the East China Sea, in Hangzhou, where China will host its first meeting of the G20, the world’s premier steering group for global economic coordination. Expect Chinese President Xi Jinping to underscore the dramatic, ongoing shift of global economic gravity toward Asia, as well as China’s unique position as a bridge-builder between the developed and developing nations. At the top of Beijing’s agenda will be reinvigorating the global economy (and demand for Chinese manufactures) at a time when China’s once red-hot growth has slowed to just under 7 percent. Other themes likely to dominate China’s G20 chairmanship include infrastructure investment, development cooperation, clean energy, and regional trade integration.

The most obscure summit on the 2016 calendar may be the most important. In mid-October, the United Nations Conference on Housing and Sustainable Urban Development (Habitat) will convene for only the third time in forty years. The time is certainly ripe. Back in 1976, when Vancouver hosted Habitat I, only 37.9 percent of the world’s population lived in cities. Today the figure is 54.5 percent and climbing rapidly. This chaotic urbanization has created what some have described as a planet of slums—but it has also opened a world of possibilities, given the historical role that cities have played in creating wealth and improving social welfare. Today’s cities cover only 2 percent of the world’s land surface but generate 70 percent of the world’s GDP, as well as 70 percent of its trash and greenhouse gases.

The goal of Habitat III is to promote urbanization that works both for urban citizens and a warming planet. One concrete outcome should be a network of informal alliances among the world’s major cities so that they can learn from each other and cooperate to solve global problems. A worthy precedent is the C-40 Cities Climate Leadership Group. Spearheaded by former New York Mayor Michael Bloomberg, this network of scores of cities has become a leading force in the battle against global warming.

7. Conference of Parties to the UN Framework Convention on Climate Change (Marrakech, November 7–18)

Following up on the recent breakthrough climate summit in Paris, world leaders will reconvene next November at COP-22, in Morocco. The Marrakech summit will offer a reality check: Have governments actually followed up on the individual, voluntary pledges to reduce greenhouse gas emissions they made ahead of the December 2015 summit in Paris? Are they prepared to ramp up these pledges? One indicator of progress will be the vigor of the “high-ambition coalition” that emerged in the run-up to Paris. That alliance of developed and developing countries was one of the most promising developments in climate diplomacy in years. Another will be whether China appears to be living up to its ambitious promises. The biggest wild card, however, will be the U.S. presidential election of November 8. The outcome of the U.S. vote could well determine the fate of global efforts to combat climate change.