Skip to main content
The Year of the Flu

The year 2015 may be the most complicated influenza year in history. So many new types of flu, including highly infectious strains, have emerged that public health officials around the world are racing to keep up with the viruses and spot the dangers they may pose. A hallmark of the year is forms of influenza normally found in birds that seem capable of infecting people, with high lethality.

The United States is now officially in the grips of an influenza epidemic, according to the nation’s Centers for Disease Control and Prevention, caused primarily by a strain of H3N2 flu that is not akin to the form used in this year’s vaccine development. The new strain’s H, or hemagglutinin, and N, or neuraminidase, structures on the virus’s outer envelope are so different from anything scientists anticipated that they aren’t recognized by this season’s vaccine. As a result, immunization is expected to offer only about 20 percent protection against the 2015 flu in North America and Western Europe. It may shorten the length and severity of disease for H3N2 sufferers, but will not prevent infection.

The H3N2 flu has now spread across most of Western Europe, the United States, and Canada, and is taking a particularly high toll of illness and fatality among young children.  By late January, sixty-one Americans had died of the flu, eleven of whom were small children, including youngsters who had been vaccinated, according to the CDC. At least five different flu strains are circulating in the United States right now, confounding the CDC.

The co-circulation of multiple strains is a worrying trend. Consider Taiwan, where the alphabet soup of strains is staggering: H5N3, H2N3, H5N2, H5N8, H5N6, H5N1, and H5N6. Most of these strains occur in Taiwan’s birds, with a few human cases. Taiwan’s CDC has seen many cases of dually, or even triply infected animals: The influenzas are becoming genetically jumbled, resulting in nearly daily discovery of new forms of flu, with unknown disease potential. In the first two weeks of January alone, at least sixteen poultry outbreaks involving four different flu strains, some of which were mixing, were reported in Taiwan.

"Influenzas do not just pop up out of nowhere—they jumble their genes up, mixing one avian or swine flu with another to form something new and potentially dangerous."

Meanwhile, another flu strain, H5N6, has surfaced in Vietnam, infecting poultry alongside an older H5N1 outbreak. The H5N6 has also surfaced in China’s Guangdong province, infecting humans and poultry in Sichuan and Harbin.

Also making a return in Asia is the H7N9 avian flu, which kills more than a third of the people it infects, but rarely transmits from person to person. The H7N9 flu first appeared in the Shanghai area in 2013, swiftly spreading across much of China that winter and spring. A recent study from Robert Webster’s St. Jude’s Children’s Research Hospital team indicates that H7N9 appeared to have morphed from an old chicken virus.

As H7N9 human cases again surfaced in December 2014, Shanghai, Hong Kong, and southern China’s Guangdong province went on public health alerts. The link between live animal poultry markets across China and transmission of H7N9 is now irrefutably demonstrated, offering hope that closing markets as soon as infected birds are discovered can prevent human infection.  In January, a Canadian couple who had traveled in China were diagnosed with H7N9, making them the first people known to have H7N9 in North America. They remain under close observation in the Vancouver area.

Return of the H5N1 Avian Virus

The H5N1 avian virus, which has circulated in Asia since the mid-1990s, has returned in China and Southeast Asia, as well as in Egypt, where it has infected  domestic birds. Between 2003 and 2014, H5N1 killed 393 of the known 668 infected humans (PDF), and by late January, twenty-eight people had been infected and nine died of the virus there. In neighboring Libya, at least five people have died of H5N1 this season. In January, H5N1 also surfaced in Japan, Indonesia, Nigeria, the West Bank, Israel, and Turkey, with suspected cases in Lebanon.

Influenza viruses that are of H5 forms are especially lethal. This year various H5 strains are circulating on four continents, reaching, for the first time, the United States and Canada. Worse, in many places more than one H5 strain is circulating, raising concern that people or animals may be coinfected with multiple forms of flu that can then mix and match their genes, forming recombined, novel influenzas, perhaps with greater virulence. Such recombination event has occurred in the Pacific Northwest of the United States and Canada. Beginning in late 2014, the region witnessed the emergence and spread in birds, including poultry, of H5N2, H5N8 all the way down to Mexico. In January, Washington reported to international authorities that the two flu strains had recombined, to form H5N1 influenza—for the first time—in the United States.

"The news of such a dizzying array of genetic forms of hemagglutinin and neuraminidase influenzas is partly a result of improved surveillance measures."

Given the lethality of this form for humans, it is cause for special concern. Ten years ago, as H5N1 spread across China and Southeast Asia, killing nearly two-thirds of the people it infected, the George W. Bush administration rushed to formulate the United States’ first pandemic preparedness plan. But until this year, the dreaded H5N1 never infected migratory birds along the Asia flyway that overlaps with the North America migratory route over Alaska. Migrating aquatic birds, such as geese and ducks, tend to travel along corridors of the planet seasonally, sticking to the same routes, or flyways, barring unusual weather events. The flyways of the Americas are mostly separated from those of the rest of the world, with only a small Arctic overlap zone that has remained free of H5N1 contamination.

The CDC has compared the outbreak of this year’s flu, H3N2, to the 2009 H1N1 swine flu pandemic. That pandemic originated in North American pigs, but spread to a few California and Texas children, and exploded in Mexico in March of that year. Fortunately, the 2009 H1N1 strain was not especially lethal, but it did prove unusually contagious as it caused one of the largest pandemics in modern history. The CDC graphic below compares the current trajectory of H3N2 flu to those of recent years, illustrating why the agency is anxious about this year’s epidemic. 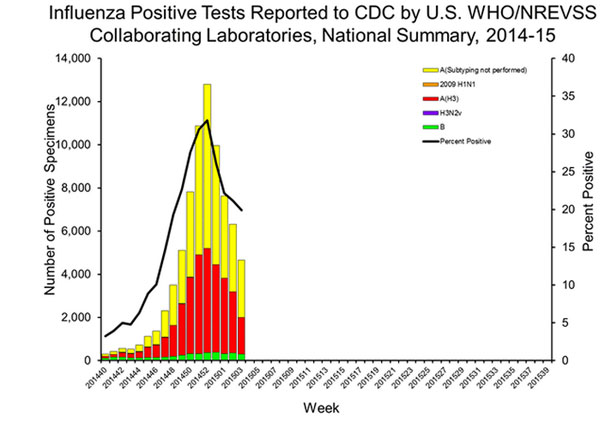 A crucial message from the St. Jude’s research is that influenzas do not simply appear out of nowhere—their genes are jumbled, mixing one avian or swine flu with another to form something new and potentially dangerous. The appearance of influenza strains in any given part of the world follows the seasonal movements of their carriers, migrating aquatic birds, and to a lesser degree shipments of contaminated poultry.

H5N8 has now turned up around the world, including in the western United States and Canada. H5N2 flu has emerged in birds, as well, in flyways in that area.

The news of such a dizzying array of genetic forms of hemagglutinin and neuraminidase influenzas is partly a result of improved surveillance measures.  More types of flu in animals are detected than was the case twenty years ago. But many scientists believe that the pace of evolution in influenza is hastening because of human movement and trade along the Asian flyway, giving more opportunities for various types of flu to comingle, jumble their RNA genetic material, and form novel strains. This large-scale mix and match is making it ever harder for the World Health Organization (WHO) and scientists worldwide to predict which forms of influenza are likely to hit human populations, accurately predict what type of vaccine is likely to prove effective each year, and anticipate the movement of flu viruses from wild birds to domestic fowl, fowl to humans, humans to swine, and swine back to human beings.

Every wild aquatic bird flyway in the world appears to be contaminated now with at least one virulent influenza strain, and some flyways host multiple influenzas. As shown in this map from Wetlands International, via the Food and Agriculture Organization, there are only two locations—both Arctic—where the flyways of Asia, Africa, and Europe intersect with those of the Americas. 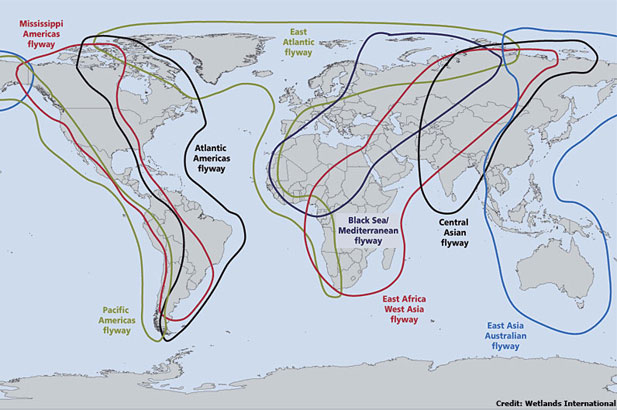 The best protection against pandemic threats is a costly package of actions: Culling flocks of contaminated poultry; closing live animal markets, especially in China; when vaccines against particular strains exist, mass immunization of flocks and livestock; and institution of rigorous hygiene procedures in commercial swine and poultry operations.

Not surprisingly, pathogenic strains of influenza spread most efficiently between animals and to humans in places where farming is small-scale or subsistence, particularly in China, Southeast Asia, Indonesia, Nigeria, and Egypt.

The Bush administration’s pandemic preparedness plan nested leadership for an epidemic inside of the Department of Homeland Security. In September 2014 the Obama administration updated the pandemic plan, moving it under the auspices of the CDC and the Health and Human Services department, and creating a six-step response strategy led by the CDC, working in close collaboration with the WHO.

Since the mutation and subsequent dangerous spread of H5N1 in 2005 from China to Siberia, across Europe and down to North Africa, the world has been on alert for a flu pandemic that might rival the 1918 epidemic, which killed at least fifty million people in the Americas, Middle East, and Europe in just eighteen months, and is reckoned to have claimed as many as fifty million more lives in Asia and Africa. Systems of bird and animal surveillance, and of rapid testing and genetic analysis of human cases, have vastly improved worldwide. But the surveillance safety net is fallible, as this year’s poor vaccine reckoning illustrates.