Though it has yet to stir a proper government response, the Zika virus poses a serious and unique public health threat to the United States. Congress left for summer recess in July without allocating funding for research and prevention efforts. The Zika risk grows with every day of delay. Municipalities and counties across the southern United States are struggling without mosquito-control funds, and a potential catastrophe is unfolding in Puerto Rico.

“This is no way to fight an epidemic,” Tom Frieden, Director of the Centers for Disease Control and Prevention (CDC), said earlier this month after the funding measure failed to pass before the congressional recess. The CDC is spread thinly, with researchers trying to figure out a disturbing sequence of new developments: whether individuals infected in Florida represent the beginning of local mosquito spread in the United States; how a Utah man who died of the disease unwittingly passed his infection onto his caregiver;  and cases of viral transmission through sexual intercourse. Officials are trying everything from anti-mosquito spraying and drainage of likely places the insects might lay their eggs to handing out free condoms and around-the-clock education campaigns to slow Puerto Rico’s outbreak. 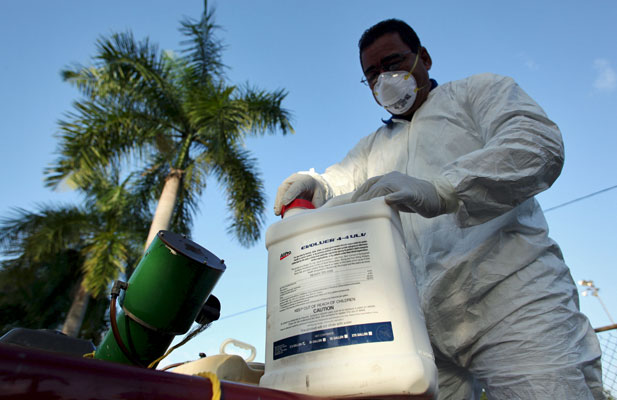 This virus is like no other.  Zika seems to encompass the characteristics of dozens of viruses, all in one microscopic package. Spread primarily by mosquitoes, it is increasingly also transmitted sexually, and there are reasons to worry that Zika could take off like HIV did in the 1980s should the virus take hold in a highly sexually active niche in our society. Like Zika, HIV was an ancient African virus that primarily infected wild primates. It made the leap to human-to-human spread after the microbe got into the blood bank system, was shared on the contaminated needles of drug users, and spread quickly among gay populations in North America and Europe.

" With each passing day and increment of rising moist temperatures, the challenge of preventive action against potential mosquito carriers of the virus gets harder."

Though many viruses can be transmitted from an infected mother through the placenta to her fetus, no mosquito-carried microbe has ever caused the staggering range of birth defects now catalogued with Zika. Skeptics who note dengue and chikungunya—viruses carried by the same species of mosquito as Zika—have never caught fire in the United States despite widespread transmission elsewhere in the Americas fail to appreciate the significance of Zika’s capacity to be spread by other means: blood, sexual intercourse, urine, and possibly saliva.

Much attention has been paid to the Rio Olympics amid concern that the Zika epidemic that has plagued Brazil for a year could sicken athletes and sports fans, and that some might carry the virus back to their home countries. In June, an emergency World Health Organization expert panel on Zika decided not to recommend postponing or moving the Olympics. Now that fifty countries have active Zika transmission, the CDC calculates about forty million trips will be made between the United States and those infested areas in 2016, with the Rio Olympics representing just 0.025 percent of that movement. Moreover, it is winter in Rio, and as temperatures drop, the Aedes aegypti mosquitoes that carry the virus are retreating into their annual hibernation. Zika diagnoses have fallen from a March high of eight thousand per week in the country to less than two hundred per week in July.

But as winter peaks in the south, summer heat waves have hit the north, where mosquitoes are now emerging from their winter sleep. With rising moist temperatures, the challenge of preventive action against potential mosquito carriers of the virus gets harder, and risks for people rise. It is far easier and less expensive to kill the insects in their larvae phase, as they lie immobile on the surface of standing pools, puddles, and pots of water, than it is to destroy the flying adult bugs. Florida has now witnessed fourteen Zika cases believed to be the result of being bit by local mosquitoes.

Zika is a global phenomenon. What exploded in Brazil in the spring of 2015 has now spread around the world. We have seen other birth defect-causing viruses: cytomegalovirus, rubella, and herpes simplex—though none produce the range of fetal malformations Zika is exacting. The closest in terms of its effect on society might be the rubella virus (sometimes called German measles), which in 1963–65 swept across Europe and North America, infecting pregnant women and causing 11,000 miscarriages in the United States; 2,100 babies exposed in utero to rubella died shortly after birth, and 20,000 more suffered congenital rubella syndrome: deafness, heart problems, blinding cataracts, and microcephaly. A vaccine was eventually developed, and the last congenital rubella case in the United States was reported in 2003.

As was the case with rubella in the 1960s, Zika fear hits young women who are either pregnant, or hope to be, the hardest. And it is they who are paying the price in every hard-hit country, from the Pacific Islands to Brazil, northward up the Americas, throughout the Caribbean, and now in Puerto Rico.

With few tools on hand to stop, diagnose, or treat Zika, the WHO last month advised that women living in or traveling to Zika-infested countries delay planned pregnancies in 2016, probably 2017, perhaps until a safe vaccine is available in late 2018. The WHO has never previously issued such a declaration, and it is difficult to gauge the significance of a significant simultaneous cessation of reproduction across many countries.  Across the Americas abortion rates have surged, demand for contraceptives is up, and governments are struggling to make condoms affordable and accessible.

In at least ten countries, including the United States, women have acquired Zika sexually from their male partners and then passed the virus on to their fetuses. (U.S. officials have also reported one case of male-to-male sexual transmission and a case of female-to-male transmission of Zika.) Although most adults who get Zika are only sick for a few days, the virus can remain in men’s (even those with no symptoms) semen for ninety-three days. Pregnant women have the virus in their blood for ten weeks. This is probably as a result of the virus infecting and growing on the fetus, which sheds Zika back into the mother’s bloodstream throughout pregnancy. This could mean that pregnant women pose a sexual transmission threat to their partners for many weeks. In the fetus, the virus thrives and multiplies in brain cells.

" As was the case with rubella in the sixties, Zika fear hits young women who are either pregnant, or hope to be, the hardest."

Exposure to the virus is dangerous throughout pregnancy, as Zika feeds on fetal brain cells throughout the nine months of gestation. Zika causes a congenital syndrome even more profound than the rubella effects seen in the mid-1960s, Kathy Spong, director of the National Institute of Child Health and Development, told NIH officials in a June briefing. Careful study of Zika cases in pregnant Brazilian women reveals that the virus induces miscarriages, stillbirths, abnormally small fetal growth, and fetal damage including limb abnormalities, a range of eye damage and blindness, and severe brain damage. Terrible congenital defects have been seen in babies born to mothers who never even knew they had Zika, as their infections were asymptomatic—yet they gave birth to babies who were blind, convulsing, and suffering from impaired thinking due to calcium deposits throughout their brains.

Brazil is now witnessing a big increase in adult cases of Guillain-Barré syndrome, an autoimmune response to Zika infection that leads to paralysis and in rare cases, death. Though attention has focused on pregnant women and newborns, the latest research shows Zika could be disabling in a number of ways for adults. New research shows that the Zika virus destroys growing brain cells and attacks neurons, possibly in people of all ages, causing a broad spectrum of central nervous system disorders that range from temporary paralysis to microcephaly, miscarriage, blindness, deafness, motor dysfunction, hallucinations, and seizures—all of which have been observed clinically and induced in animal studies.

At least 433 pregnant women in the United States and 422 in Puerto Rico have tested positive for Zika infection, as of July 21.  Twelve babies have been born with microcephaly and other deformities in the U.S., six have miscarried. Puerto Rico has reported one confirmed Zika miscarriage to date, and 3,815 cases acquired from local mosquitoes. Experts predict Puerto Rico will have hundreds of microcephalic babies by summer’s end. Overall, there were 1,403 confirmed Zika cases in the United States as of July 20.

Federal health officials are closely monitoring Puerto Rico. Anthony Fauci, director of the National Institute of Allergy and Infectious Diseases, says the U.S. territory will “have a real catastrophe soon,” because of its experience in 2014 with chikungunya, which is carried by the same Aedes aegypti mosquitoes that transmit Zika. In May of that year, only a handful of chikungunya cases were reported, but by August, 25 percent of the Puerto Rican population had contracted the disease—an explosive spread that Fauci believes is a harbinger of what is in store with Zika. The CDC believes that the numbers of confirmed infections in Puerto Rico represent only a fraction of the actual infections, as more than 90 percent of Zika infections are asymptomatic: No one knows the true number of infections to date.

" Brazil is now witnessing a big increase in adult cases of Guillain-Barré Syndrome, an autoimmune response to Zika infection that leads to paralysis and in rare cases, death."

Meantime, even with the late start, it is ever more urgent for lawmakers to approve the White House requests for $1.9 billion in funds to combat the disease. By one calculation, the lifetime care costs for babies born this summer with Zika-caused microcephaly could range from $13 billion to $130 billion. The leaders of the CDC and the National Institutes of Health say that without the requested funding a crucial window of opportunity to prevent a North American Zika outbreak will be lost. As the CDC’s Frieden puts it, “We are fighting with one hand tied behind our backs.”

Larry Brilliant is an epidemiologist who chaired the national biosurveillance advisory subcommittee. He was a WHO medical officer in India and has written a personal account of being part of the team that eradicated smallpox called Sometimes Brilliant, which is due to be published by Harper-Collins in October.