Hurricane Ian, which battered parts of Florida and South Carolina, is estimated to be the latest in a growing trend of billion-dollar disasters in the United States. These are weather and climate disasters that inflict more than $1 billion in damages in a single year.

Over the past five years, there has been an average of 17.8 such events per year, compared to an annual average of 7.7 between 1980 and 2021. Last year marked the seventh consecutive year in which ten or more billion-dollar disasters pummeled the nation. By July 11 of this year—just over halfway through 2022 and before Hurricanes Fiona and Ian struck—there had already been nine. 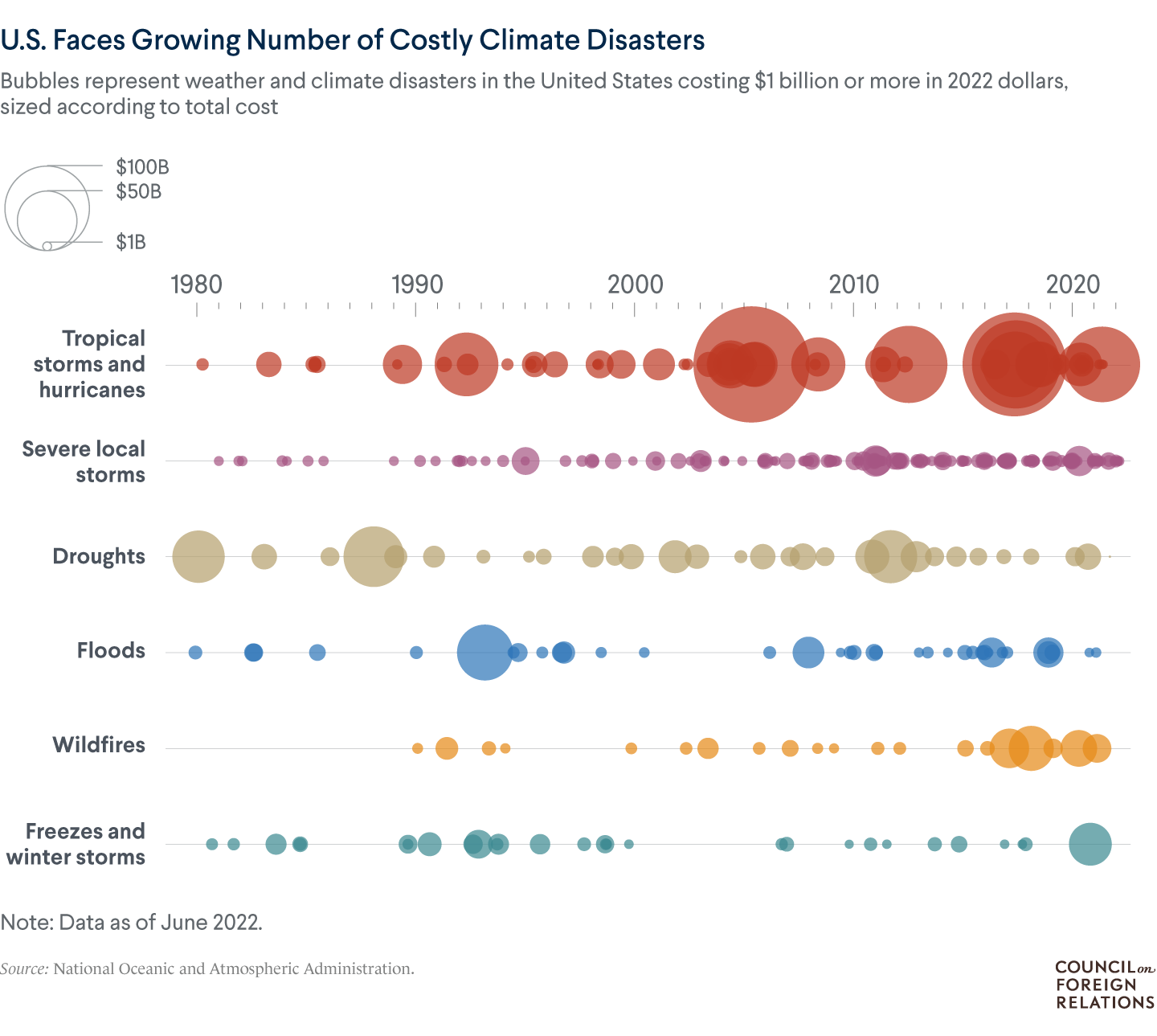 Why are billion-dollar disasters increasing in the United States?

In May 2022, the amount of carbon dioxide in the atmosphere reached a level that has not been seen in millions of years and that is over 50 percent higher than in the preindustrial era. The heat trapped by carbon dioxide and other human-produced greenhouse gases has increased the world’s average temperature.

Climate change is “supercharging the increasing frequency and intensity” of weather extremes, according to the U.S. National Oceanic and Atmospheric Administration. It spawns greater rainfall variability, lengthens the wildfire season in the American West, increases drought vulnerability, and drives bigger storm surges as sea levels rise. Given the relentless accumulation of greenhouse gases in the atmosphere, 2022 is likely the harbinger of a more violent weather future.

The tendency of Americans to move toward disaster risk also contributes to increased losses. As more people live in high-risk areas, damages increase when disaster strikes. Nearly 40 percent of the nation’s population lives in coastal counties, even though the coasts comprise less than 10 percent of the country’s land mass and face higher climate vulnerabilities. Florida, the most hurricane-prone state, has suffered three of the four Category 5 hurricanes to ever hit the United States. Yet Florida’s population increased by more than 211,000 residents from July 2020 to July 2021—a larger net migration than any other state.

Areas with the highest fire risk are also experiencing fast population growth. From 1990 to 2010, the number of homes constructed in the Wildland-Urban Interface (WUI)—areas where wilderness and human development meet and that are at greater risk of wildfires—grew by more than 41 percent [PDF]. Nearly one-third of the U.S. population lives in the WUI, which is growing by two million acres annually.

What can be done?

To reduce the damage caused by billion-dollar events and lower the exposure of Americans to heightened risk, the United States has to reconsider where and how it builds. Many communities still lack climate-resilient building codes, which fortify buildings against increasingly extreme weather.

There are many more actions federal, state, and local governments can take to mitigate risk before disaster strikes, such as creating a national adaptation strategy, identifying climate-change-vulnerable areas, prioritizing climate-resilient investments, and restricting development in high-risk areas. At the same time, the United States should rapidly reduce and remove heat-trapping emissions from the atmosphere to limit warming.

Explore More on Energy and Environment