The mass sexual assaults committed by asylum seekers in Cologne and other German cities on New Year’s Eve have ratcheted up the debate about migration across a continent still grappling with the worst migrant crisis since World War II. For CFR Senior Fellow Rachel Vogelstein, lost amid this roiling immigration debate is the focus on women’s rights and safety, which, she says, "needs to be on the front pages all the time, and not just when the perpetrators are migrants or asylum seekers." Sounding caution about groups co-opting the language of feminism to advance anti-migrant policies, Vogelstein says that the issue of sexual violence against women predates Europe’s migration crisis, and as such, requires a larger systemic response. 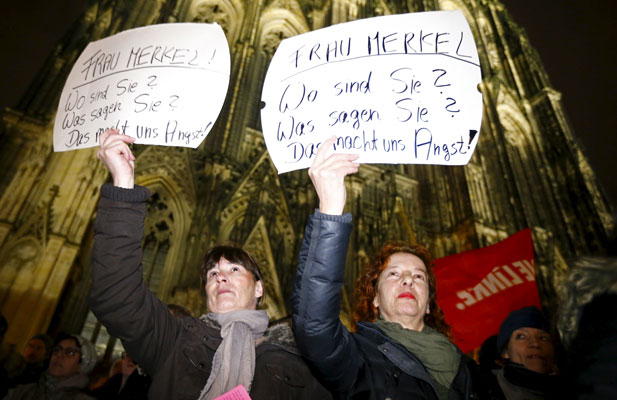 Women hold up placards that read, "Mrs. Merkel: Where are you? What are you saying? This worries us!" during a protest in front of the Cologne Cathedral on January 5, 2016. (Photo: Wolfgang Rattay/Reuters)

What do the Cologne attacks tell us about the state of women’s rights in Europe?

More From Our Experts
Liana Fix
Germany’s China Policy: Has It Learned From Its Dependency on Russia?
Ann Norris
Renewing the Global Architecture for Gender Equality

Let me start with an observation about the two factors that I think really contributed to the substantial and even growing fallout that we see from the attacks in Cologne. The first factor is the scale of the attack, which really can’t be understated. To date: 659 women have filed criminal complaints, 359 of which were about sexual offenses. So regardless of who the perpetrators were, the scale of the attacks was staggering.

The widespread reports of the poor response by the police force during the attack (which ultimately led to the firing of the Cologne police chief) and the delayed media attention have subsequently fueled concerns about the second factor: the inadequacy of the response. This is something that we continue to see today with recent reports that the Cologne Carnival [Germany’s Mardi Gras] will have “safe zones” for women, which, on the one hand, could be seen as a positive in that services will be available to women who attend and need a safe place. On the other hand, the implication that the rest of the city is not safe for woman supports the notion that there’s a completely inadequate response to the violence—particularly the sexual violence—that women face there.

How do you explain the politics of outrage that followed the attacks?

Last year, Germany saw 1.1 million asylum seekers. This attack took place at a time of rising concern about migration. There is a lot of the rhetoric from groups that oppose Chancellor Angela Merkel’s asylum policies, and this event really offered these groups an opportunity to leverage public outrage into political opposition to the asylum policies themselves.

"We have seen groups that have not been on the vanguard of women’s rights that are suddenly very concerned about rape culture. It’s important to note that that is not a long-standing position."

More From Our Experts
Liana Fix
Germany’s China Policy: Has It Learned From Its Dependency on Russia?
Ann Norris
Renewing the Global Architecture for Gender Equality

We have seen groups that have not been on the vanguard of women’s rights that are suddenly very concerned about rape culture. It’s important to note that that is not a long-standing position. In fact, if we look back to 2013, when there was a wave of activism and public debate in Germany about sexual harassment and assaults, and the quote-unquote, “everyday sexism” that women face there, women’s groups were fueling that conversation. And many of the groups that we now see co-opting some of the language about freedom from violence and women’s rights were nowhere to be found. In fact, past proposals to strengthen German’s penal code in the area of sexual assault were widely opposed. And although they are now being revived, I think it’s notable that this prior debate took place without support from most of the groups who are now clamoring to improve safety and protection for women.

It’s also important to be careful not to cast aspersions on an entire population because of the bad acts of certain individuals. And one really good example of why that is a fallacious approach is the reporting that we saw from the New York Times about an American woman, Caitlin Duncan, who was attacked on New Year’s Eve. It turned out that a group of men, led by a Syrian refugee, protected her, and actually brought her to safety. So the notion that it is a particular population—as opposed to individuals—perpetrating this violence is something that we ought to be careful about.

"Cologne speaks to the need to highlight and elevate the issue of sexual violence against women and safety for women in Germany more broadly."

The other important takeaway is that the conversation about violence against women in Germany is one that needs to be on the front pages all the time, and not just when the perpetrators are migrants or asylum seekers. One in three German women have experienced some form of physical violence, according to the 2004 survey from the Federal Ministry of Family Affairs, Senior Citizens, Women and Youth. And one in seven German women have experienced some form of sexual violence. Sexual violence in Germany is a problem that long predated this attack or this wave of migration. The Cologne attacks speak to the need to highlight and elevate the issue of sexual violence against women and safety for women in Germany more broadly.

A disproportionate number of the migrants making their way toward Europe right now are young, unmarried men. And there are some studies that suggest a direct correlation between skewed sex ratios and greater incidences of violence. Should European governments be bracing for a prolonged period of social unrest?

There has been a gender imbalance not only in Germany but also in Sweden, where more than 70 percent of the asylum applicants in the past year were male. And we see the gap widen even more with those who are under the age of twenty-five and are mostly unmarried and unaccompanied. And there has been some research that shows that skewed gender ratios, particularly in certain age groups, can trigger greater incidence of sexual assault and sexual harassment, as well as fuel an increased demand for prostitution. This phenomenon has been referred to as the "bare branches" theory.

"It is a fallacy to assume that only men can commit violent crimes."

I don’t want to overlook the important research that’s been done in this area. We’ve seen in places where there are incredibly skewed sex ratios, like China and India, that there are serious consequences. That said, I think it is a fallacy to assume that only men can commit violent crimes. This predisposition is concerning, particularly given that we have seen a rising number of women who have been participants in terrorist activity and as armed combatants. And the failure to take seriously the notion that women could be perpetrators of violence will redound to our detriment. In light of the San Bernardino attacks [where one of the assailants was a woman], overlooking women as potential attackers doesn’t make a lot of sense.

Some experts have suggested that European governments follow Canada’s lead and exclude young, single men from their resettlement programs. Would this policy work in a European context?

The likelihood of effectively implementing a policy like that is low. More importantly, if we are going to be serious about addressing violence against women, then we need to look at it in all of its manifestations, and think about how we can support a response—whether it’s a legal response, or a law enforcement response, or a judicial response – that is commensurate with the crimes being committed. It is not at all clear that you’re going to resolve the one in three number of German women experiencing physical violence, or one in seven experiencing sexual violence, by cutting off the flow of young men who are migrants to Germany.

"If we’re thinking about how to ensure that the values of a particular nation are shared with a migrant population, I think that we would do well to start by clarifying what those values are."

Violence against women is an epidemic that infects every corner of the world. It is not particular to any race, or religion, or ethnicity, or region. It is everywhere. And one positive result, if one could see any positive result from the horrific attack that took place, is that the [German] population is really talking about this issue in a way that perhaps we haven’t seen before. In fact, Germany has one of the lowest rates of public perception of the prevalence of violence against women in the EU. Only 23 percent of German women report having ever heard of an awareness raising campaign on this issue, which is drastically lower than, for example, the 70 to around 80 percent of women in Spain, or in France, or in Greece, who have heard of an awareness raising campaign. But the notion that there is now a trending hashtag (#einearmlaenge) where German women and men are all tweeting about this attack and condemning the sexual violence that persists—if we could find any silver lining, that would be it.

Are there specific policy initiatives that European governments adopt to ensure that migrants and refugees from the Middle East, North Africa, and South Asia embrace what some leaders have called "basic European values," including gender equality? For example, would expediting their entry into the workplace, opening access to education, or expediting family resettlement facilitate greater cultural assimilation?

Polices supporting the integration of migrants and refugees are important. And governments who are welcoming migrants to their shores should provide services to facilitate what you mentioned.

But if we’re thinking about how to ensure that the values of a particular nation are inculcated into a migrant population, I think that we would do well to start by clarifying what those values are. When a society tolerates one in three women experiencing physical violence or one in seven experiencing sexual violence, and when there is one of the lowest rates of public perception of this problem in the European Union, it seems to me that clarifying values like physical autonomy and freedom from violence for the entire population is something that the government must grapple with.