A graft scheme involving Brazil’s state-owned oil giant, Petrobras, has compounded problems in Brazil’s shaky economy and threatens to do lasting damage to President Dilma Rousseff’s government and the ruling Workers’ Party (known by its Portuguese acronym, PT), says expert João Augusto de Castro Neves. Investigators have accused Petrobras executives of accepting as much as $1.6 billion in bribes from contractors and funneling some of that money into the PT’s coffers. The scandal comes as Brazil’s oil and infrastructure sectors are seen as particularly important to reviving the country’s economy. “These are precisely the two sectors that were hit hardest by the scandal,” says Castro Neves. “There’s a real risk of a deeper recession this year.” 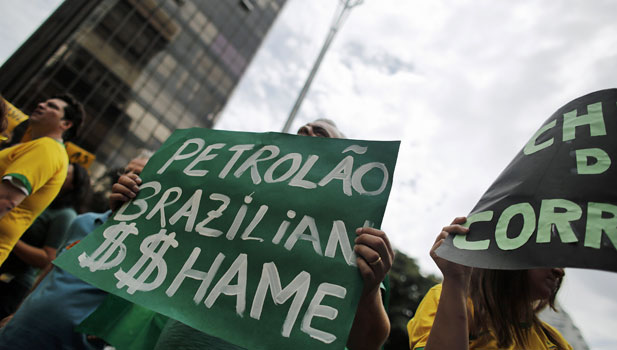 What is Petrobras’s significance in Brazil, and how serious is this scandal for Rousseff and her government?

Before this scandal, Petrobras was a source of national pride. Brazil built this company from scratch in the 1950s, and in the last two decades Petrobras developed cutting-edge technology in the oil sector. It was a globally competitive company and has been an important tool for all governments, Left or Right, to bolster Brazil’s economic growth. Petrobras investments are roughly 10 percent of total investments in the economy. It is Brazil’s largest company, and it has influence that goes beyond the oil sector.

It’s hard to anticipate what’s going to happen next. [The Petrobras investigation] is creating tension within the political class because of the names involved, [including the PT’s treasurer, João Vaccari Neto, and the heads of both houses of Congress], which may lead to proof of illegal campaign financing, which may give grounds for [Rousseff’s] impeachment.

Brazil had a consumption-led growth model in the recent past under former President Luiz Inacio Lula da Silva and early in Rousseff’s administration—with Bolsa Familia [a social welfare program], minimum wage increases, and an expansion in credit—but that model reached an exhaustion point. The challenge for the government is to transition the economy to a more investment-led growth model. The two most promising sectors for this transition were the oil sector and the infrastructure sector. These are precisely the two sectors that were hit hardest by the scandal: Petrobras, obviously, and Petrobras’s contractors, which are Brazil’s major construction and engineering companies. There’s a real risk of a deeper recession this year.

How does the Petrobras scandal compare to previous corruption cases in Brazil?

The difference in this case is the scale. The [2005 vote-buying scandal] Mensalão is pocket change compared to this. There’s a lot of frustration that Brazil hasn’t evolved because there’s a corruption scandal every couple of years, but there has been some institutional progress. [PT politicians implicated in] the Mensalão went to trial, most of them went to jail, and that’s an important landmark for Brazil.

What may set Brazil apart from its neighbors and some other emerging economies is that Brazil has a pretty independent judiciary. That explains in part why these scandals pop up every now and then; the government cannot contain these investigations. Brazil approved in 2013 an anticorruption law—modeled on the U.S. anticorruption law—and we’re seeing incremental improvements.

Brazil was posting 7.5 percent growth rates as recently as 2010. Huge oil discoveries in 2007 were supposed to transform the economy. What happened?

That wave has receded, which has weakened these leaders significantly. It has structurally changed a lot of these countries. We’re not back to the way things were before: Brazil, Chile, and Colombia, for example, now have more solid macroeconomic fundamentals.

But the big change is the new middle class, which has been a byproduct of this boom. They demand more from their governments and their leaders. Before they were middle class, their priorities were core economic issues: jobs, income, etc. As they become middle class, they go into the quality agenda: services, health care, etc. These leaders now have to deliver more with less because there’s no growth.

"The two most promising sectors for this transition were the oil sector and the infrastructure sector. These are precisely the two sectors that were hit hardest by the scandal."

Domestically, Lula and the PT rode the wave of [the boom], and that generated a certain amount of hubris. There was greater state intervention in the economy. Brazil relied less on foreign capital, which gave the government more leeway to experiment with macroeconomic policies. Brazil wanted to help build huge, multinational companies—not necessarily state-owned companies, but there was a protectionist bent. As the economic environment deteriorated over the past few years, the government couldn’t keep those policies up. We’re seeing the end of that mild state capitalism now, which is a gradual, haphazard process.

The government was also not implementing much needed structural reforms—tax reform, pension reform, labor reform. Some of those reforms were made in the 1990s and early 2000s, but then the agenda changed. The economy was growing, money was pumping into Brazil, and sense of urgency to do these reforms was low.

Has Rousseff’s government signaled a willingness to change course?

There will be a course correction toward more market-friendly policies. But that doesn’t mean we’ll see a huge, ambitious reform agenda. The government doesn’t have the political capital. These reforms require great deals of political capital because they require Congress’s approval. And this course correction has more to do with necessity than [Rousseff’s] convictions.

The appointment of the new finance minister, Joaquim Levy, a more orthodox, market-friendly economist, is already a course correction to what was previously an incoherent, opaque fiscal policy. [Brazil] now has a more austere and transparent fiscal policy.

On sector-specific [reforms], we don’t expect a paradigm shift, but there have been statements signaling the government’s [willingness] to revamp the concessions framework on the logistics infrastructure sector, giving more favorable terms to the private sector to denationalize airports, roads, and rails. This is new. We’ll probably see this having a positive effect on the oil sector, with some opening up of the sector. We expect a less state-centric system, with Petrobras’s importance diminished a bit.

We don’t think Brazil is going to move full throttle toward more market-friendly policies. Compared to other countries in the region, Brazil’s transitions from Left to Right have always been very gradual. The state will always have a big role in Brazil’s economy.

What are the long-term implications of this crisis for Brazil? How long before Brazil sees meaningful growth?

We may still see heavy headwinds in the coming months, but there will be silver linings. Will this solve the corruption problem in Brazil? No. But these difficulties will push the government to unwind its involvement in the economy. Brazil will come out with a much better corporate governance structure across the board. Petrobras will come out of this smaller but stronger from a corporate governance standpoint. [At least part of] the anticorruption law will stick.

Brazilian assets are becoming cheap and [appealing] to foreign investors. Petrobras announced it will sell roughly $13 billion in assets, and that story will likely be repeated in construction companies.  Despite the crisis, [investing in Brazil] is a good long-term play: Brazil is a huge country, has rich natural resources, has an important industrial base, and has a huge consumer market. It’s hard to anticipate how much will surface in this scandal, but we think later this year or early next year Brazil will be back on investors’ agendas. We don’t expect a boom period like in the recent past, but 2016 may be a turning point.

Rio de Janeiro is slated to host next year’s summer Olympics. Will the current political and economic situation affect the country’s ability to host the event?

A lot of the construction companies involved in the [Petrobras scandal] are running major Olympics projects, so there may be delays. I don’t think we’ll see a problem with the crucial things that need to get off the ground. It’ll be similar to the 2014 World Cup. People thought it would be chaos and the Brazilians wouldn’t be able to pull it off, but they did. The stadiums were there, but the infrastructure around them wasn’t. [Brazilians] were promised subway systems and improved infrastructure across the board. Instead they got huge, state-of-the-art, expensive stadiums and nothing around them. People saw the costs of hosting the World Cup and went out to the streets to complain. With the Olympics you may see a similar story.

Democracy in Nigeria Has Stalled