The Pakistani Taliban, which claimed responsibility for the attack on a Peshawar school that killed more than 140 people, has been expected to strike back against a government offensive in North Waziristan. But the massacre of mostly students was shocking, even for a country as traumatized as Pakistan, says CFR Senior Fellow Daniel Markey.  The military offensive has weakened and dispersed the group, but the campaign also signals the central government’s shortcomings, says Markey. “Pakistan has only a very limited capacity to administer these territories once military operations end,” he says, “and those limits are partly linked to the weak capacity of the state as a whole.” 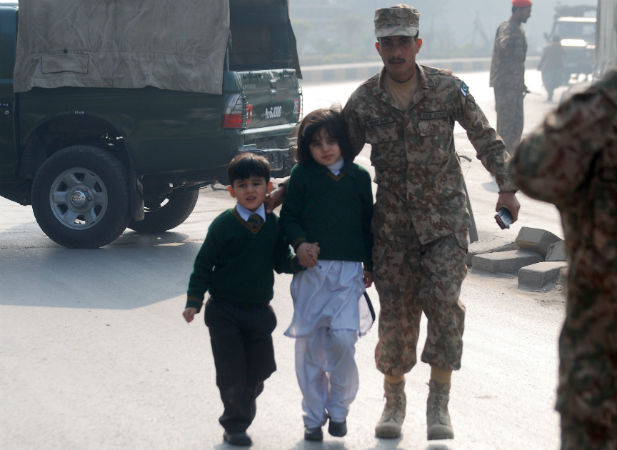 A Pakistani soldier escorts schoolchildren from the Army Public School that fell under attack by Taliban gunmen in Peshawar. (Photo: Khuram Parvez/Courtesy Reuters)
More From Our Experts
Christa N. Almonte
Inspiration in the Ranks
Jacob Ware
Elections, Violence, and the Future of American Democracy
Bruce Hoffman
What Zawahiri’s Killing Means for al-Qaeda

What do we know about the attackers? Why did they target the military-run school?

The Pakistani Taliban (TTP) claimed responsibility for the attack and chose the school as a "soft," or lightly defended, target that would grab national and global attention. Like other terrorists, they aim to shock. Even for a country as traumatized as Pakistan, this was shocking.

The attackers claimed that this was retaliation for the Pakistani military’s first offensive in North Waziristan, but it comes six months after the start of that operation. Why now?

There have been other terrorist attacks in response to the offensive, including the November suicide bombing of the Wagah border crossing with India. Many analysts, myself included, anticipated that the backlash would have been even worse. There is no way to know for sure why this attack happened precisely when it did, but Pakistani military and civilian leaders claim that they have aggressively gone after other terrorist plots around the country, arresting suspected militants and disrupting their networks. Unfortunately, this time they failed.

What do we know about the efficacy of this counterinsurgency campaign and the state of the TTP?

“Pakistan’s military routinely complains that the TTP has found safe haven inside Afghanistan, and that problem isn’t likely to be resolved in the near future.”

By most accounts, including public statements by U.S. officials, the Pakistan military has made strides in its North Waziristan campaign, at least with respect to clearing strongholds of TTP and allied fighters, disrupting their training and planning, and shutting down facilities devoted to building weapons like improvised explosive devices. Yet the army operations were hardly a surprise, so senior TTP leaders escaped into Afghanistan or other parts of Pakistan. Beyond that, Pakistan has only a very limited capacity to administer these territories once military operations end—to "hold" and "build," in the U.S. military’s lexicon. Those limits are partly linked to the weak capacity of the state as a whole.

Is the Pakistani military now likely to reconsider its approach of discriminating between “good” militants—those focused on fighting abroad, especially in Afghanistan—and “bad” militants —those whose fight is primarily against the Pakistani state?

Possibly, but not likely. The "bad" Taliban took responsibility for this attack, so it’s not clear that a Pakistani military and intelligence establishment that has so far been unwilling to tackle all of the various terrorists on its soil—including those, like Lashkar-e-Taiba, that target India—would now choose to expand its targets and court an even fiercer backlash. Still, if more Pakistanis, and especially those in positions of authority, see this as conclusive evidence of the danger posed by coddling any terrorists and extremists, this latest tragedy would have some silver lining.

Have U.S. drone strikes had a substantial impact on the TTP’s ability to consolidate territory in the tribal areas or strike elsewhere in Pakistan?

It is difficult to judge the strategic utility of drone strikes against the Pakistani Taliban, but we do know that some of its top commanders have died by drone. Because the principal threat to the TTP has always been disunity and infighting, these strikes have probably been beneficial in keeping the TTP off-balance as an insurgent organization. Clearly, they haven’t eliminated the group’s ability to inflict such violence on Pakistan’s people.

Will the NATO drawdown from Afghanistan alter the TTP’s calculus or the Pakistani military’s strategy with respect to militants?

Pakistan’s military routinely complains that the TTP has found safe haven inside Afghanistan. That problem isn’t likely to be resolved in the near future. The NATO drawdown only makes it harder to patrol the border or bring the writ of the Afghan state into eastern provinces like Khost, where insurgents and terrorists have a strong presence.

Given the Pakistani military’s persistent skepticism about the stability of the new Afghan state, there are few reasons to believe that it will now, after over a decade of resisting Washington’s pleas, turn completely against groups like the Afghan Taliban and Haqqani network. Conceivable, desirable, but not likely.

Prime Minister Nawaz Sharif has seen his authority challenged both by the military and opposition leader Imran Khan, whose party, Pakistan Tehreek-e-Insaf (PTI), runs the government in Khyber Pakhtunkhwa, where the attack took place. How might this attack alter the political scene?

Nawaz Sharif must demonstrate that when it comes to fighting the TTP, there is zero space between him and the military. Failure to do so could jeopardize his position as prime minister. It is thus not surprising that Sharif went very quickly to the scene of the attack in Peshawar to declare his commitment to fighting terrorism.

At the same time, Sharif’s principal opponent, the PTI’s Imran Khan, is unlikely to be helped politically by this attack.

In the short term, Khan has been forced to call off looming nationwide protests against the sitting government. In the longer term, Khan’s apparent soft spot for Pakistan’s Taliban and affiliated groups make him an uncomfortable partner for the Pakistani military. This, in turn, reduces Khan’s ability to put pressure on Nawaz Sharif’s government or to portray himself as a viable candidate for prime minister in the near future.