The Bretton Woods conference, convened in the penultimate year of World War II, established a global financial framework anchored by the U.S. dollar. Seventy years later, the United States still holds the dominant role in the world’s monetary system. Yet China is now the world’s largest creditor nation and Washington and Beijing don’t seem interested in jointly committing to new reforms that could stabilize the global monetary and financial system, says CFR Senior Fellow Benn Steil, author of The Battle of Bretton Woods, a prize-winning book on the historic conference. "This means that changes to the system are likely to be uncoordinated and confrontational," says Steil. 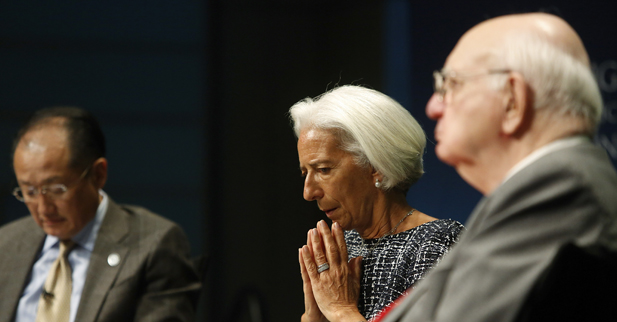 What was the purpose of the Bretton Woods conference in July 1944, and what was at stake?

Officially, the conference was a joint Anglo-American undertaking, convening fourty-four Allied nations late in the war (three weeks after the D-Day landings) to establish a new postwar monetary and financial architecture. The initiative was, however, taken early in the war by FDR’s Treasury secretary, Henry Morgenthau, and his deputy (one could say his policy brain), Harry Dexter White. They had two primary aims. The first was to establish a new international monetary framework, with a privileged place for the U.S. dollar, to be overseen by a new International Monetary Fund. Countries would agree to a fixed (but adjustable) exchange rate for their currency against the dollar, which would in turn be permanently convertible into gold at $35 an ounce. Treasury wanted to end competitive devaluations against the dollar, and offered financing through the IMF for countries running balance of payments deficits as an inducement for them to agree to the exchange-rate rules.

The second aim was never stated publicly, but was at least as important: to use American financial leverage over bankrupt Britain to pull down the economic foundations of its global empire. This included the special status of the pound sterling and so-called imperial trade preference—the arrangement by which Britain gave itself privileged access to the markets of its colonies and dominions. This would, Treasury believed, permanently eliminate Britain as a geopolitical and economic rival.

Your book The Battle of Bretton Woods examines the maneuvering that took place between famed British economist John Maynard Keynes and the lesser-known White, who helped assert the primacy of the U.S. in the newly created global financial order. White remains a controversial figure. Why?

In creating the IMF and a new global fixed-exchange-rate monetary system to support the revival of a multilateral trading system, White can be considered one of the founding fathers of postwar capitalism. But he was also, much more privately, a great admirer of what he saw as the success of Soviet economic planning, which he believed would spread throughout the world after the war. And over the course of his twelve years at Treasury he engaged in some extraordinary freelance diplomacy and policy machinations, some of which he clearly knew to be illegal (as he expressed grave concern at the prospect of getting caught), to assist the Soviets economically and politically. Among my archival discoveries were a long, never-before-referenced 1944 handwritten essay of White’s extolling the virtues of Soviet socialism and eighteen Soviet intelligence cables (more than anyone had identified previously) documenting White’s activities with and on behalf of Soviet intelligence.

One of the issues up for debate today is ending the European claim for the IMF’s managing directorship and the U.S. claim on the World Bank chief’s role. Why were these positions set up this way, and what prospects are there for changing it?

The only reason why a European heads the IMF today is because of [U.S. President Harry S.] Truman’s efforts to cover up the White spy scandal. As I explain in the book, White would have headed the IMF, and an American might have headed the World Bank as well, had it not been for FBI director J. Edgar Hoover’s determination to stop White’s appointment. The United States was dominant enough economically at the time that it could easily have dictated these appointments. Today, of course, there is enormous pressure from the developing world on the Europeans to relinquish their hold on the IMF top spot, and on the Americans to give up their claim to the World Bank top job. My guess is that the Europeans will be obliged to blink first, owing to clear mistakes in the European-led Greek bailout (which are perhaps now being replicated in Ukraine).

What stands up as the most important achievement of the Bretton Woods conference?

No doubt the creation of the IMF is the most enduring, although it should be emphasized that the functions of the institution have metamorphosed in ways in which both Harry Dexter White and John Maynard Keynes never would have imagined—or approved. In particular, neither man envisioned the IMF playing the role of global crisis-fighter. They saw it as an important means of helping to avoid crises, but countries were expected to change their policies (mainly devaluing) if one were to emerge.

Many credit Bretton Woods with the revival of global trade and growth after the war, but this is surely wrong. The IMF was mothballed by the Truman administration, and did little in the late ’40s and much of the ’50s. Its role was supplanted by the 1948 Marshall Plan, which buried the idea of lending money to bankrupt allies in favor of a scheme based on massive grants-in-aid. Furthermore, the monetary system established at Bretton Woods could really not be said to have started at all until 1961, when the first nine European countries met the requirements of the IMF articles of agreement that their currencies be convertible into dollars. And by this time the system was already experiencing great strain as the United States was losing monetary gold reserves—governments were losing faith in the dollar’s gold backing.

China is among the new global players most equipped to challenge the role of the World Bank and IMF, with more than $3 trillion in reserves. Are we likely to see China play a central role in reshaping global finance? Will there be a China-U.S. competition that rivals the U.S.-British contest seventy years ago?

Without doubt, China will be playing a much larger role in the international monetary and financial architecture going forward, through greater formal representation at the IMF (and World Bank), rapidly growing trade and investment links around the world (including parts of Africa where the U.S. role is marginal), and an expanding role for its currency, the RMB, in trade and investment. There are fascinating parallels between the U.S.-UK creditor-debtor relationship in the 1940s and the China-U.S. creditor-debtor relationship today. Chinese officials use much the same language to describe the problems in the current monetary and financial architecture that the U.S. Treasury used in the 1940s (that is, that it’s the fault of the profligate debtors, with their lax monetary and fiscal policies), and the United States uses the same language today that the British did in the 1940s (that is, that it’s the fault of the selfish, mercantilist creditors). Former Treasury secretary Tim Geithner’s 2010 proposal for caps on persistent current account surpluses was pure Keynes.

That said, the parallels are easily overstated. The United States, in spite of its economic problems and relative economic decline, vis-à-vis China, is hardly the prostrate supplicant that Britain was in the 1940s. Its currency still represents about 63 percent of global foreign exchange reserves, and it issues its debt in the currency it prints (unlike Britain in the 1940s, which needed to borrow and import in dollars). When the Eisenhower administration kicked Britain out of Suez in 1956 by threatening to withhold vital emergency IMF financial assistance, it could afford to provoke a sterling crisis at little cost to itself, as U.S. holdings of British securities amounted to a mere $1 per U.S. resident. Chinese holdings of U.S. securities today, in contrast, amount to about $1,000 per Chinese resident. So if China were to try to provoke a dollar crisis to discipline American behavior it would, at least in the short term, be hurting itself as much as it would be hurting the United States.

What are some of the main lessons from 1944 for policymakers today as they discuss reform of the international financial system?

Bretton Woods was, in essence, a deal between two nations whose policies were critical to global financial stability at the time: the United States, the world’s dominant creditor nation, and Great Britain, its largest debtor. The former agreed to assist nations struggling with current account deficits and the latter to forswear competitive devaluation. Today, a roadmap to cooperative monetary reform appears out of reach politically. The world’s largest creditor, China, and its largest debtor, the United States, seem wholly unwilling to sublimate their prerogatives in the monetary sphere—China to control its exchange rate, and the United States to control dollar interest rates—to any abstract conception of the global good. This means that changes to the system are likely to be uncoordinated and confrontational. For example, the emerging-market currency and bond market sell-off following the beginnings of Fed taper-talk [the planned winding down of the U.S. Federal Reserve’s stimulative quantitative easing policy] in May of last year will undoubtedly prod developing nations to keep their currencies from appreciating in good times, to engineer persistent current account surpluses, and to boost dollar foreign exchange reserves. U.S. policymakers refer to this policy mix as "currency manipulation," and are already demanding provisions to outlaw it in all future trade agreements. I foresee trade frictions growing in consequence.