This year’s Summit of the Americas, held in Panama City on April 10–11, will be notable for the first-time participation of Cuba. The presence of both U.S. President Barack Obama and Cuban President Raul Castro amid their efforts to normalize relations could signal a new era in regional cooperation, says CFR Senior Fellow Shannon K. O’Neil. “One of the biggest irritants to U.S.-Latin America relations has been U.S.-Cuba policy. [The rapprochement] takes a lot of that animosity out of these potential relationships,” O’Neil says. The summit, convened by the Organization of American States (OAS), will likely center on economic issues as the region winds down from a commodities boom, but U.S. sanctions on Venezuelan officials are expected to be a source of tension, O’Neil says. 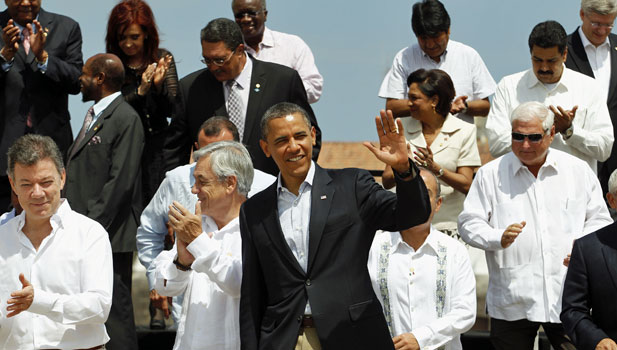 U.S. President Barack Obama waves as he and other heads of state pose for a group photo at the 2012 Summit of the Americas Summit in Cartagena. (Photo: Enrique Marcarian/Courtesy Reuters)
More From Our Experts
James M. Lindsay
Thanking America's Veterans
Miles Kahler
Global Governance to Combat Illicit Financial Flows

How significant is the opening in U.S.-Cuba relations for this summit ?

It’s incredibly important. At the last summit, in Cartagena [in 2012], [OAS members said] they would not meet again without Cuba coming. Given the state of U.S.-Cuba relations at the time, that put the United States in a quandary. Would you see Obama shaking Raul Castro’s hand at the next Summit of the Americas? Would he even go? And if he didn’t go, what would that mean for the OAS and the summits?

This opening up of relations with Cuba is huge for the summit in that yes, Obama can go and shake Raul Castro’s hand and be seen in the same room with him. But it’s also important on a symbolic level: One of the biggest irritants to U.S.-Latin America relations has been U.S.-Cuba policy. [The rapprochement] takes a lot of that animosity out of these potential relationships, allowing these countries to focus on other issues, such as trade, immigration, and security.

What does Cuba’s participation in the summit mean?

This is a first step for Cuba to be part of an organization that’s hemisphere wide. Cuba has had official relations with every government excluding the United States, and now that that’s changing, it brings Cuba into the fold. I’m not sure that their voice at the table changes the dynamic in terms of policy or prescriptions since Cuba is one among many countries and there are others who will likely voice similar positions. But it does finally make the OAS a hemisphere-wide organization rather than one that excludes a member.

Are recent U.S. sanctions on members of the Venezuelan government likely to cause friction at the summit?

It’s in [Venezuelan] President [Nicolas] Maduro’s interest to have U.S. sanctions brought to the floor to deflect talk of issues occurring at home, specifically the erosion of freedom of expression, freedom of association, and free and fair elections. Others, including [Ecuadorean President Rafael] Correa, have also chimed in criticizing the sanctions, comparing these U.S. interventions with those historically in place against Cuba. Yet the scale is vastly different here: In the recent actions against Venezuela, seven people have been sanctioned, as compared to a decades-old embargo against a whole country.

Has the OAS extended its commitment to democracy to Venezuela?

There’s a real worry that the commitment that the OAS had ten-plus years ago has been eroded and that [the leaders] in recent years haven’t stood up for the defense of freedom of speech and checks and balances between legislatures and executives the way they did in the past.

Is that a leadership issue at the OAS or part of a wider trend in the region?

The OAS has the challenge of being a consensus-based organization, so as the profile of presidents or countries that are within it has changed, it’s harder to build a consensus around issues. It isn’t that the organization and its principles have shifted—the 2001 [Inter-American] Democratic Charter remains in effect—but the willingness of participants to actively enforce these norms has changed. At the same time, some countries are turning to other regional institutions to push forward policy and politics, including UNASUR, ALBA, and CELAC, none of which include the United States. [The United States] turns less to the OAS as a place to forward U.S.–Latin America relations and do it much more in a bilateral or subregional level than we probably did in the past.

Have past Summits of the Americas served a useful purpose?

The summits are an important venue for bringing people together. Probably some of the most important aspects of it are the interactions among presidents and ministers of various countries. The consensus statements that come out of the meetings are often very scripted and aspirational rather than operational. The actual summits are more part of a process within the overall OAS framework rather than pivotal moments as such.

"It’s in President Maduro’s interest to have U.S. sanctions brought to the floor to deflect talk of issues occurring at home."

Probably the most important [thing the OAS has done] is produce the Democratic Charter in 2001. The OAS has been incredibly important in various instances, [such as] when countries stood up against the erosion of democracy in places like Paraguay in 1996 and Peru in 2000. In both cases, neighboring countries and the OAS stood up successfully to defend democracy.

What are the United States’s chief interests at the summit?

There are a lot of things that are happening in the hemisphere and a lot of changes in the economies in the region. We’re at the end of a commodities supercycle, so we’re seeing changes in many countries’ underlying growth patterns. That effects their foreign relations. The United States is particularly tied to Canada, Mexico, and Central America particularly in trade and manufacturing. There is huge potential for trade with the rest of the region, so economically there’s a huge benefit to the United States if the region does well and worries if the region does not.

Security issues like crime, drug trafficking [also come up]. A secure and safe region is important for the United States. We also care about politics and democracy. We care that others in the hemisphere have a voice, the ability to express opinions, whether similar or different from their governments. The president goes [to the summit] interested in what can make a stable and secure and more prosperous and democratic hemisphere.

Is there a trade agenda?

The Summit of the Americas started with a real aspiration to create a Free Trade Area of the Americas (FTAA). That didn’t come to fruition. At the 2005 Mar del Plata summit, the divisions that appeared made it clear that the FTAA was dead in the water. But the summit is a place where issues like trade can be discussed in smaller groupings, where presidents can meet and find mutual interests. Presidents of the Pacific Alliance countries—Chile, Colombia, Mexico, and Peru—and others will [likely discuss trade]. The United States is right now thinking about the Trans-Pacific Partnership. Many Latin American countries are involved in that, and others are interested in it. I’m sure it will be a topic among various presidents, but I would imagine in smaller groupings. It isn’t going to be the focus of the larger summit, as it had been in [past summits]. But it is a place where they see each other and meet and push for agendas.