Skip to main content
How Binding Is the Iran Deal?

The deal to restrict Iran’s nuclear program in exchange for sanctions relief cleared its first procedural step this week with the unanimous endorsement of the UN Security Council. A tougher hurdle awaits in the U.S. Congress, which has begun a sixty-day review of the deal, which is known formally as the Joint Comprehensive Plan of Action (JCPOA). Despite charges that the Security Council’s vote undermines the congressional review, CFR’s John Bellinger says the UN resolution does not bind the United States to lift sanctions. The resolution’s mechanism for reinstating sanctions "would allow the United States, or any other JCPOA participant, to unilaterally reimpose all previous UN sanctions on Iran," Bellinger says. 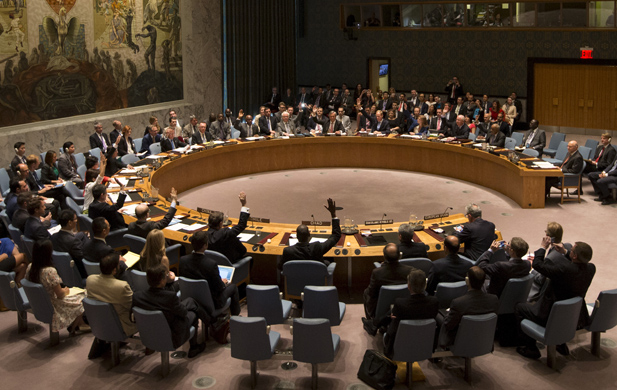 The UN Security Council votes to endorse the Joint Comprehensive Plan of Action agreed to by Iran and major powers. (Photo: Mike Segar/Reuters)

The UN Security Council unanimously endorsed the Iran nuclear deal on Monday. Meanwhile, the U.S. Congress has sixty days to review it. Some of the deal’s critics in the United States have said this sequence undercuts congressional review. Does their argument have merit?

It appears to many members of Congress, especially Republicans, that the Obama administration has preempted congressional review of the Iran nuclear deal by voting to approve a new UN Security Council resolution (UNSCR) endorsing the JCPOA before Congress has completed, or even seriously started, its own review. These members of Congress believe that the Obama Administration should have sought the views of Congress on the JCPOA before endorsing the agreement to the rest of the world, especially in a complex Security Council resolution that will terminate a decade of UN sanctions on Iran. But the JCPOA will not take effect for ninety days after adoption of the UNSCR, on or about October 19. This allows Congress time to complete the sixty-day review mandated by the Iran Nuclear Agreement Review Act, which must be completed by September 17, and even to vote on whether to override a presidential veto before the JCPOA actually takes effect.

“By voting on the [Joint Comprehensive Plan of Action] after the UNSCR has been adopted, Congress can arguably consider a fuller picture of what it is voting to approve.”

By voting on the JCPOA after the UNSCR has been adopted, Congress can arguably consider a fuller picture of what it is voting to approve. The new UNSCR contains important provisions that are not in the JCPOA, such as the details of the snapback process for the UN’s nuclear-related sanctions and arms and missile-technology embargoes. Members of Congress might have criticized the administration equally much if Congress had not been able to see these provisions, not merely in draft but as adopted by the Security Council, before voting on whether to approve the JCPOA.

The new UNSCR does not bind the United States to lift sanctions on Iran, as I explain on the Lawfare blog. The new UNSCR “calls on” all UN member states to support implementation of the JCPOA, but it does not obligate the United States to do so as a matter of international law. The provisions of the UNSCR that do legally bind UN member states are those that continue the existing arms and missile-technology embargoes on Iran, which are obligations that would not be politically controversial.

Do you foresee any legal challenges to the implementation of the deal?

Most observers expect that Congress will vote to disapprove the JCPOA. President Obama has said he will veto such a resolution of disapproval, and Congress is not expected to have sufficient votes to override a presidential veto. In that case, President Obama can carry out U.S. commitments under the JCPOA, including lifting sanctions. If circumstances change, however, and Republicans attract enough Democratic votes to override a veto, Congress could prevent President Obama from lifting statutory sanctions on Iran—those sanctions that have been mandated by Congress, but for which Congress had delegated waiver authority to the president. These are primarily far-reaching sanctions on non-U.S. financial institutions and non-U.S. companies that invest in or do business with Iran’s oil, gas, petrochemical, shipping, and automotive sectors. (President Obama could still lift the more limited sanctions on Iran that he imposed solely by executive order.)

This would be inconsistent with U.S. commitments in the JCPOA to lift sanctions, but it would not violate the new UNSCR. (Nor would it actually violate the JCPOA, which is a political declaration, not a legally binding agreement.) Iran would then have to decide whether to continue to fulfill its own commitments under the JCPOA, and benefit from the lifting of EU and UN sanctions, or to cease to carry out its nuclear commitments. In the latter case, the deal would collapse, and Iran would return to its nuclear activities.

Reinstating UN sanctions would normally be subject to a veto in the Security Council. How have the JCPOA’s negotiators arranged for these multilateral sanctions to "snap back" if Iran is found to be noncompliant?

Both the JCPOA and the new UNSCR have strong “snapback” provisions that would, as a purely legal matter, allow the United States or any other JCPOA participant to unilaterally reimpose the full panoply of sanctions on Iran contained in six previous UNSCRs if the JCPOA participant believes Iran has not performed its commitments in a significant way.

The dispute-resolution provisions of the JCPOA provide that participants in the JCPOA must submit issues of significant noncompliance to a "joint commission" comprising the five permanent members of the Security Council, the EU representative, and Iran. The commission has thirty-five days to attempt to resolve the issue before the Security Council can be notified of the issue of non-performance.

The new UNSCR requires the Security Council to vote on a draft resolution to continue the termination of the sanctions under the previous UNSCRs within thirty days of receiving notice of “an issue that the JCPOA participant believes constitutes significant non-performance of commitments under the JCPOA.” If the Security Council does not adopt a new resolution extending the terminations, then the original six resolutions will automatically be reactivated within thirty days. The snapback provisions are “all-or-nothing”; unless the Security Council were to extend their termination or agree on lesser sanctions, the sanctions regime imposed by all six previous resolutions would snap back into place.

Does this mechanism to bypass a potential veto have a precedent?

“The United States would face overwhelming international pressure to not unleash the far-reaching legal effects of the reinstatement of the UN sanctions regime, especially in the event of violations by Iran that seem minor to other countries.”

These automatic snapback provisions could, at least in theory, be used by the United States to prevent a repeat of what happened after Iraq failed to comply with its inspection obligations set forth in UNSCR 1441 (2002), which gave Iraq a “final opportunity to comply with its disarmament obligations.” UNSCR 1441 obligated the Security Council only to “convene immediately” upon receipt of a report from the IAEA of Iraq’s noncompliance “in order to consider the situation.” (I was one of the principal negotiators for UNSCR 1441. This was the strongest commitment of future Security Council action the United States could get.) When Iraq violated its obligations and the Security Council convened in early 2003, other Security Council members refused to agree to the U.S. request for more serious consequences for Iraq. In contrast, the new UNSCR on Iran would allow the United States, or any other JCPOA participant, to unilaterally reimpose all previous UN sanctions on Iran.

This would be easier said than done, however. In practice, the United States would face overwhelming international pressure to not unleash the far-reaching legal effects of the reinstatement of the UN sanctions regime, especially in the event of violations by Iran that seem minor to other countries. Because of the all-or-nothing formulation, snapback provisions could thus prove difficult for a future president to implement.

Will President Obama’s successor have the prerogative to scrap the agreement?

The next president will have the legal right under both domestic and international law to scrap the JCPOA and reimpose U.S. nuclear sanctions on Iran. Such an action would be inconsistent with political commitments made by the Obama administration, but it would not constitute a violation of international law, because the JCPOA is not legally binding. Nor would it constitute a violation of the new UNSCR.

Of course, the unilateral reimposition of U.S. sanctions—like the unilateral activation of the snapback provisions of the new UNSCR over the objection of other JCPOA participants—would likely cause a major rift with U.S. allies and Iran to resume its nuclear activities.

The JCPOA calls for the termination or modification of statutory sanctions in eight years, if not sooner. If the Congress then declines to alter the sanctions, would the United States be considered noncompliant with the deal?

Under the JCPOA, the United States has committed for the first eight years only to “cease the application” of U.S. nuclear-related sanctions imposed by executive order or enacted by Congress but for which the president has waiver authority. The United States has committed after eight years only to “seek such legislative action as may be appropriate” to terminate or modify statutory sanctions. Congressional inaction would not violate U.S. commitments under the JCPOA. The Obama administration appears to have been careful not to commit to any actions that the executive branch alone cannot deliver.