Skip to main content
How Iran Gains From Assad Victory

With Syrian president Bashar al-Assad claiming a sweeping electoral victory, one party set to gain in influence is Iran, says Lebanon-based expert Michael Young. "Iran entered the Syrian conflict essentially wagering on the Assad regime," Young says. "It put all its money to back the Syrian regime, and to a certain extent, it has succeeded." He says with the elections this week, Assad "will be able to anchor himself more solidly as the president of Syria at a time when the opposition has been suffering reversals." The Iran-allied militia Hezbollah also stands to gain considerably within Lebanon, in part from its successes in bolstering Assad in Syria, Young says. 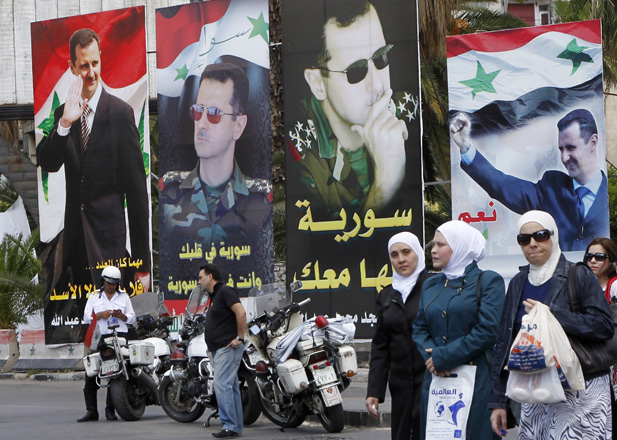 What is the significance of Assad being reelected after many experts had predicted he wouldn’t be around after the uprising started in 2011?

More From Our Experts
Christopher M. Tuttle
In Last Night’s SOTU, (Some) Republicans Gave Joe Biden Just What He Wanted

The importance of the election to Assad is that it’s basically an instrument that allows him to continue to remain in office. Assad’s goal throughout the crisis in Syria has been political survival. Assad himself was worried for a while about his supposed allies in Russia, afraid that perhaps at some stage he would pay the price of a deal that would take place between the United States and Russia over Syria. I’m not saying that such a deal existed but this was a worry that he had. Through this election, he will be able to anchor himself more solidly as the president of Syria at a time when the opposition has been suffering reversals, at least in the vital area that the regime is trying to protect—meaning Damascus, the coast, and the communication lines in between.

For a long time this was very destabilizing in terms of the domestic Lebanese scene. But at this point, a year since the intervention of Hezbollah has been made public, the system has absorbed it in Lebanon. I’m not saying that people accept it, but it’s sort of been absorbed into the political mood of the country and so it’s been digested. One factor that also plays a key role here is that a few weeks ago, the Syrian regime and Hezbollah took full control of the border area along the Qalamoun district, which is located along the Lebanese border. And that effectively cut off the organic link between the rebels and Lebanon. So the ability to transfer weapons from Lebanon into Syria, the ability of Syrian rebels to go back and forth across the border, was substantially diminished. As a result, it did tend to quiet the border area. That also, to a certain extent, has calmed the situation in Lebanon. As such, there is less instability in Lebanon today than there was several months ago.

More From Our Experts
Christopher M. Tuttle
In Last Night’s SOTU, (Some) Republicans Gave Joe Biden Just What He Wanted

What about the Syrian refugees?

The presence of a very large Syrian refugee population is a source of problems and of questions as to when these people or if these people will ever return home. But on a day-to-day basis, the instability that existed a few months ago primarily because of Hezbollah’s involvement in Syria has, to a certain extent, been contained.

Talk a little about the politics in Lebanon. You don’t have a president yet, right?

No, we don’t have a president, and there is a tendency to focus too much on the candidate specifically and primarily on the Maronite community because as you know the president in Lebanon must come from the Maronite community. The big question today is Hezbollah. Hezbollah sees 2014 as a pivotal year. They feel that in Syria the Assad regime has managed to consolidate itself. And consequently they would like to create a parallel situation in Lebanon that reflects this new situation in Syria.

For the last two years, Assad has been on the defensive, but thanks to Hezbollah and, of course, to aid from Iran and from Iraqi Shiites, he has succeeded in regaining territory and counterattacking. As a result, Hezbollah would like that situation—this new situation—in Syria to be reflected in Lebanon. That’s why its primary objective is to bring in a president who would not create problems for the party in the future, unlike the last president, Michel Suleiman. And it would like at the end of this year to win a parliamentary majority with its allies in the parliamentary elections scheduled for November. So the party sees this all as part of a whole: the consolidation in Syria of the Assad regime, and the consolidation in Lebanon of Hezbollah’s dominance. In a sense, all this would reflect to a certain extent, Iran’s greater role in the region.

So is Iran the big winner now in the region?

It’s certainly going in that direction. Iran entered the Syrian conflict essentially wagering on the Assad regime. It put all its money to back the Syrian regime, and to a certain extent, it has succeeded. On the other hand, Iran is also aware that for any kind of regional domination, it does have to, in some way, come to an understanding with the majority Sunnis in the region. And until now, the relationship with Saudi Arabia, the leading Sunni power, remains a very uneasy one. Iran has sort of a complex strategy. In countries where there is a pro-Iranian government, if the government cannot control the entire country—for example in Iraq—Iran will allow, to a certain extent, fragmentation to occur.

In both Syria and Iraq, the governments are unable to control areas of the country in which there is a Sunni majority. In a country like Lebanon, on the other hand, where its ally Hezbollah, to a certain extent, can have a dominant role over the other communities, Hezbollah has allowed the state to remain intact. It’s a multifaceted strategy, but Iran is also aware ultimately that it has to come to some kind of an arrangement with the Sunni governments, especially Saudi Arabia. But it would like to be the dominant partner. It realizes that today the Saudis and most of the Gulf states have anemic American support and that’s why it’s trying to take advantage of this.

"Hezbollah sees 2014 as a pivotal year. It feels that in Syria, the Assad regime has managed to consolidate itself."

And for the United States’ adversaries in the region, particularly Iran, they saw this as a clear opening to exploit. At the same time, the United States understandably wanted to avoid a conflict with Iran, and began these negotiations over Iran’s nuclear program. But to a certain extent, this only was to the advantage of Iran. Because what it meant is that the Iranians saw no challenge coming from the United States to a predominant Iranian role in the region. And so while Iran has definite vulnerabilities in the region, and is financially under a lot of pressure, it looks towards the future and it sees the nuclear deal as something that would allow it to economically reinforce itself.

Obama in his West Point speech last week said he was going to ramp up his support for non-jihadist rebels in Syria, but he has been criticized for not being more specific.