The new encyclical from Pope Francis about the environment, Laudato Si, sharply criticizes man-made abuses of the environment and lays out the church’s most detailed case for urgent moves to mitigate climate change. The encyclical, a long, formal letter that conveys the pope’s teachings, is both a call to action on the global stage and new guidance for how Catholics should regard ecology, say Mary Evelyn Tucker and John Grim of Yale University’s Forum on Religion and Ecology, in a written Q&A. "While discussions about social justice have been robust in Catholic and Christian contexts, this encyclical marks the first time social and environmental concerns are brought together," write Tucker and Grim. 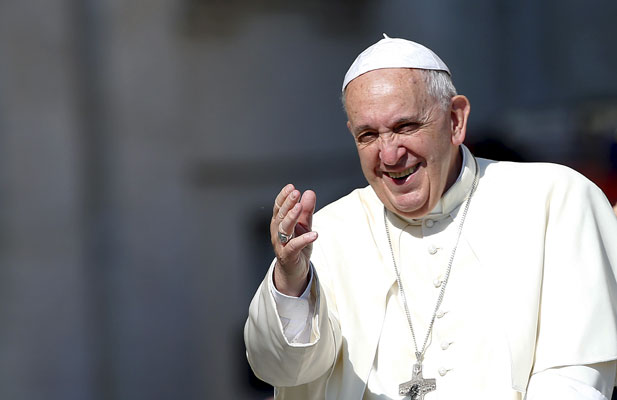 The pope’s encyclical faults human behavior for deforestation, overfishing, pollution of the world’s water supply, and global warming. Why is his pronouncement on these issues significant?

In linking human behavior to these environmental issues, the encyclical provides a Catholic statement on environmental ethics. Most importantly, this ethical position will not be simply anthropocentric, namely, that we need to protect the environment for our own welfare and for future human generations.

While human concerns are not neglected, especially regarding the adverse effects of environmental degradation on the poor, this encyclical brings two potent religious criteria to bear on this ethical discussion: namely, the earth as God’s creation, and the scientific story of evolution as opening new cosmological understandings of who the human is in relation to creation.

This encyclical is significant in providing new insight into the nature of the human as emerging out of universal processes that are seen theologically as God’s creation. That is, the divine presence working in and through creation by means of evolution is a teaching in Catholicism.

Is this what he means by the term "integral ecology"?

In this encyclical, Pope Francis gives expression to that phrase in four points: 1) The call to all peoples to be protectors of the environment is integral and all-embracing; 2) Care for creation is a virtue in its own right; 3) It is necessary to care for what we cherish and revere; 4) A new global solidarity is a key value to direct our search for the common good.

What seems crucial for understanding Francis’ usage of this phrase is his effort to integrate ecological thinking into the whole of life and not separate it out as a science, or an ethical teaching, or environmental behavior such as recycling. Rather, and this is where Francis stands in a powerful and insightful lineage, ecology is a living reality in the human that marks our interdependence with all biotic and abiotic reality.

The pope calls climate change one of the principal challenges facing humanity today and criticizes attempts at solutions like carbon credits, which he said "may simply become a ploy which permits maintaining the excessive consumption of some countries and sectors." What practical approaches does he accept for minimizing fossil fuel consumption?

I see a fundamental resistance in Pope Francis’s thinking to unbridled market capitalism that reduces everything to a commodity that is traded for profit. This resistance to carbon credits is an effort to call for moral force in the market itself to search out ways to diminish carbon dioxide and heat-trapping gases in the atmosphere by social and individual will and sacrifice.

What have previous popes had to say about the environment?

Neither John Paul II nor Benedict XVI delivered an encyclical on the environment, but they made statements in related encyclicals that have bearing on human-nature relations. John Paul II’s 1991 encyclical Centesimus Annus celebrated the hundredth anniversary of the encyclical Rerum Novarum of Leo XIII, which focused on labor, property, and the right of workers to form legal protective associations.

John Paul II continued the Enlightenment separation of humans from nature, emphasizing the dignity of cooperative human labor as making something productive of God’s gift of nature.

"The pope is saying that the challenge of climate disruption and environmental deterioration will require ethical responses."

In his 2009 encyclical, Caritas in Veritate, Benedict moved away from domination language and toward a sense of the protection of nature. He described a view of creation as in balance differing from the more dynamic understandings of ecological sciences. There is much in Benedict’s sense of a "grammar of nature" or inherent patterning of use and reciprocity within nature itself. Following that inherent "grammar" Benedict recommends responsible human use of, and appropriate ends for, God’s gift of nature. Benedict also offered some guidance on alternative energy sources and was known to have installed solar panels at Vatican. He had a sense of both the economics and scientific understanding of climate issues and the broader environmental issues.

The Vatican says this is a religious rather than a political document but isn’t it intended as a call to environmental activism?

The encyclical is a call to environmental activism as well as a religious statement that reaches across simply Catholic doctrinal boundaries. Cardinal Peter Kodwo Appiah Turkson, president of the Pontifical Council for Justice and Peace and formerly an Archbishop in Ghana, has spoken of the encyclical as an expression of Pope Francis’s long-standing attention to mercy/misericodia and what Francis calls, "a revolution of tenderness, a revolution of the heart," in which the church makes room in its interior life for the poor.

Some Catholic faithful, including prominent politicians in the United States, disagree sharply with the pope’s stance on climate change. Is there a risk of this encyclical intensifying divisions within the church rather than galvanizing action?

There is always a risk of exacerbating divisions with the church with change that requires moral transformation. But there is also the hope that by highlighting common concerns for the earth and for future generations the pope will bring about a new unity among the faithful.

With all such large changes controversy arises. There were many divisions in the Christian churches regarding segregation in the United States. Eventually with leadership, as with Martin Luther King’s, the moral voice emerged clearly. This is a similar moment when the pope is saying that the challenge of climate disruption and environmental deterioration will require ethical responses. He is asking: "How can we not think of the well-being of our children and all future generations?" This appeal to long-term thinking is the contribution of a religious, spiritual, and ethical perspective such as the pope is articulating.

To what extent have encyclicals been persuasive in guiding the actions of Roman Catholics? Could this one be persuasive to both Catholics and non-Catholics?

Earlier encyclicals focused on social justice issues have been influential throughout the twentieth century. For example, encyclicals have affirmed special concerns for the poor, as well as the rights of labor for just working conditions, wages, and the capacity to organize. On the other hand, [Pope Paul VI’s 1968] encyclical regarding birth control, Humanae Vitae, has had mixed reception, especially among the laity.

While discussions about social justice have been robust in Catholic and Christian contexts, this encyclical marks the first time social and environmental concerns are brought together. This perspective of eco-justice has traction with other Christian communities as well as non-Christian religions.

What happens next in guidance for Catholics? Will there be more consistent appeals for environmental awareness from church pulpits? A greater move toward using alternative energies?

One option is the introduction of new waves of "retrieval," "reevaluation," and "reconstruction" within religious traditions broadly considered. For example, in Catholic seminaries will the curriculum for the training of priests actually be affected?  Will Catholic priests learn how to think theologically about integral ecology and Catholic doctrines?

If seminaries and Catholic education undertake these curricular considerations it will mean a resurgence of attention to human-earth interactions in scripture, commentaries (theology), and church history. This is what we call "retrieval." The act of reflecting on its implications for the present is "reevaluation"—a dialogue across all the positions, schools, factions within a religion. Finally, if insight emerges that indeed we are connected and interdependent with the abiotic and biotic systems of the planet, religions need to "reconstruct" themselves so that values of flourishing life are apparent in rituals, teachings, trainings, and actions.

Have leaders of other religions released any equivalent documents on the environment?

Many religious leaders from around the world have issued statements on the environment, including Patriarch Bartholomew I of Constantinople, leader of the world’s Eastern Orthodox Christians, who is mentioned in the pope’s encyclical, and the Dalai Lama. There have also been recent discussions in China that have brought Confucianism into ecological civilization. Over the last two decades the world’s religions have moved forward with environmental statements, theological reflections, and engaged ecological projects. This process of retrieving, reevaluating, and reconstructing environmental ethics within the religious traditions will be an ongoing process.

On several occasions religious groups have held meetings and issued joint statements on the need for interreligious cooperation regarding environmental protection and care for creation. In September 2014 many religious leaders gathered for the People’s Climate March in New York. At the upcoming Paris United Nations Framework Convention on Climate Change talks in December, this growing movement of the need for moral response to climate change will be even more visible.

While squarely confronting the scale of the risks the world faces because of climate change, this pragmatic guide focuses on solutions—some gradual and some more revolutionary—currently being deployed around the globe.

The President's Inbox: The Coming Climate Disruption with Alice Hill

As the 2019 UN Climate Action Summit concludes, world leaders need some outside the box thinking about steps to strengthen their national commitments to shrink their greenhouse gas emissions ahead of the next phase of the Paris Agreement.