Since becoming president of the Philippines in June 2016, Rodrigo Duterte has launched a war on drugs that has resulted in the extrajudicial deaths of thousands of alleged drug dealers and users across the country. The Philippine president sees drug dealing and addiction as “major obstacles to the Philippines’ economic and social progress,” says John Gershman, an expert on Philippine politics. The drug war is a cornerstone of Duterte’s domestic policy and represents the extension of policies he’d implemented earlier in his political career as the mayor of the city of Davao. In December 2016, the United States withheld poverty aid to the Philippines after declaring concern over Duterte’s war on drugs. 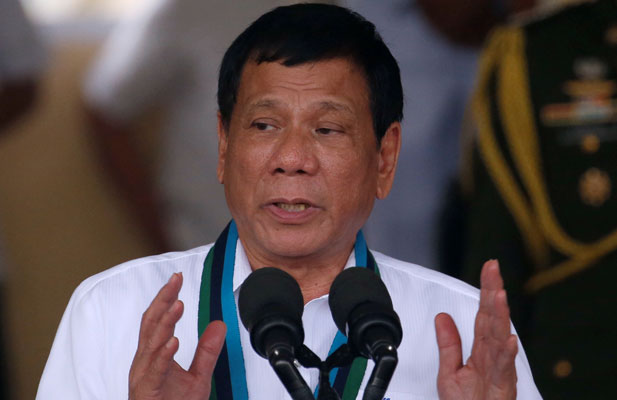 How did the Philippines’ war on drugs start?

When Rodrigo Duterte campaigned for president, he claimed that drug dealing and drug addiction were major obstacles to the Philippines’ economic and social progress. He promised a large-scale crackdown on dealers and addicts, similar to the crackdown that he engaged in when he was mayor of Davao, one of the Philippines’ largest cities on the southern island of Mindanao. When Duterte became president in June, he encouraged the public to “go ahead and kill” drug addicts. His rhetoric has been widely understood as an endorsement of extrajudicial killings, as it has created conditions for people to feel that it’s appropriate to kill drug users and dealers. What have followed seem to be vigilante attacks against alleged or suspected drug dealers and drug addicts. The police are engaged in large-scale sweeps. The Philippine National Police also revealed a list of high-level political officials and other influential people who were allegedly involved in the drug trade.

“When Rodrigo Duterte campaigned for president, he claimed that drug dealing and drug addiction were major obstacles to the Philippines’ economic and social progress.”

How would you describe Duterte’s leadership as the mayor of Davao?

After the collapse of the Ferdinand Marcos dictatorship, there were high levels of crime in Davao and Duterte cracked down on crime associated with drugs and criminality more generally. There was early criticism of his time as mayor by Philippine and international human rights groups because of his de facto endorsement of extrajudicial killings, under the auspices of the “Davao Death Squad.”

Duterte was also successful at negotiating with the Philippine Communist Party. He was seen broadly as sympathetic to their concerns about poverty, inequality, and housing, and pursued a reasonably robust anti-poverty agenda while he was mayor. He was also interested in public health issues, launching the first legislation against public smoking in the Philippines, which he has claimed he will launch nationally.

What have been the outcomes of the drug war?

By early December, nearly 6,000 people had been killed: about 2,100 have died in police operations and the remainder in what are called “deaths under investigation,” which is shorthand for vigilante killings. There are also claims that half a million to seven hundred thousand people have surrendered themselves to the police. More than 40,000 people have been arrested.

Although human rights organizations and political leaders have spoken out against the crackdown, Duterte has been relatively successful at not having the legislature engaged in any serious oversight of or investigation into this war. Philippine Senator Leila de Lima, former chairperson of the Philippine Commission on Human Rights and a former secretary of justice under the previous administration, had condemned the war on drugs and held hearings on human rights violations associated with these extrajudicial killings. However, in August, Duterte alleged that he had evidence of de Lima having an affair with her driver, who had been using drugs and collecting drug protection money when de Lima was the justice secretary. De Lima was later removed from her position chairing the investigative committee in a 16-4 vote by elected members of the Senate committee.

What is the public reaction to the drug war?

The war on drugs has received a high level of popular support from across the class spectrum in the Philippines. The most recent nationwide survey on presidential performance and trust ratings conducted from September 25 to October 1 by Pulse Asia Research showed that Duterte’s approval rating was around 86 percent. Even through some people are concerned about these deaths, they support him as a president for his position on other issues. For example, he has a relatively progressive economic agenda, with a focus on economic inequality.

Duterte is also supporting a range of anti-poverty programs and policies. The most recent World Bank quarterly report speaks positively about Duterte’s economic plans. The fact that he wants to work on issues of social inequality and economic inequality makes people not perceive the drug war as a war on the poor.

How is Duterte succeeding in carrying out this war on drugs?

The Philippine judicial system is very slow and perceived as corrupt, enabling Duterte to act proactively and address the issue of drugs in a non-constructive way with widespread violations of human rights. Moreover, in the face of a corrupt, elite-dominated political system and a slow, ineffective, and equally corrupt judicial system, people are willing to tolerate this politician who promised something and is now delivering.

There are no trials, so there is no evidence that the people being killed are in fact drug dealers or drug addicts. [This situation] shows the weakness of human rights institutions and discourse in the face of a popular and skilled populist leader. It is different from college students being arrested under the Marcos regime or activists being targeted under the first Aquino administration, when popular outcry was aroused. Drug dealers and drug addicts are a stigmatized group, and stigmatized groups always have difficulty gaining political support for the defense of their rights.

How has the United States reacted to the drug war and why is Duterte challenging U.S.-Philippines relations?

It’s never been a genuine partnership. It’s always been a relationship dominated by U.S. interests. Growing up in the 1960s, Duterte lived through a period when the United States firmly supported a regime that was even more brutal than this particular regime and was willing to not criticize that particular government. He noticed that the United States was willing to overlook human rights violations when these violations served their geopolitical interests. He was unhappy about the double standards. [Editor’s Note: The Obama administration has expressed concern over reports of extrajudicial killings and encouraged Manila to abide by its international human rights obligations.] For the first time, the United States is facing someone who is willing to challenge this historically imbalanced relationship. It is unclear what might happen to the relationship under the administration of Donald J. Trump, but initial indications are that it may not focus on human rights in the Philippines. President-Elect Trump has reportedly endorsed the Philippine president’s effort, allegedly saying that the country is going about the drug war "the right way," according to Duterte.

The interview has been edited and condensed.

The Implications of Duterte’s Midterm Victory

The Road Not Taken

In chronicling the adventurous life of legendary CIA operative Edward Lansdale, The Road Not Taken definitively reframes our understanding of the Vietnam War.