The siege by Islamic State in Iraq and Syria forces [ISIS] of the Syrian city of Kobani has heightened the refugee crisis throughout Iraq and Syria, says Jane Arraf, a veteran correspondent who has covered the area for years. "The refugee camps are overflowing" in northern Iraq’s Kurdish region, she says, and "many thousands of people are sleeping out in the open, in construction sites, in open buildings." Arraf says the problem is compounded by an overstretched UN. 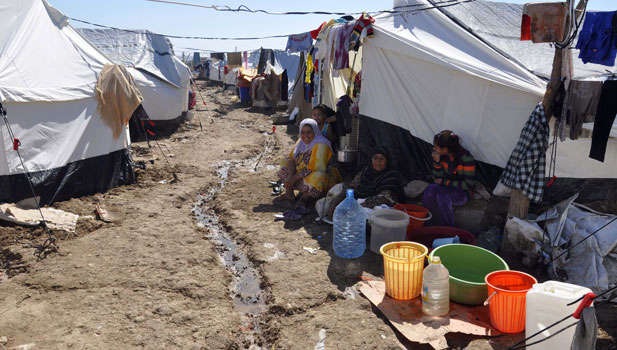 Displaced families, who fled from ISIS violence in Mosul, sit at the Ali Awa refugee camp near Khanaqin City, Iraq, October 22. (Photo: Mohammed Adnan/Courtesy Reuters)
More From Our Experts
Elliott Abrams
Why “Reforming” the United Nations Security Council is a Bad Idea
Steven A. Cook
How Israel and Turkey Benefit From Restoring Relations
Gideon Rose
Where Will American History Go Next?

In recent days you’ve been covering the refugee crisis in northern Iraq and Syria. How bad is it now?

It’s really bad and it’s getting worse. It’s getting worse because as the fighting continues, people have been displaced now two or three times from their homes. I’m in Dohuk, in Iraqi Kurdistan, which has taken in almost 300,000 refugees in addition to all those displaced from Kobani.

Kobani has been in the news because of Turkey’s seeming reluctance to help the Kurds militarily. Has anything changed?

Yes. [Iraq’s regional] Kurdish parliament voted to send the Peshmerga, the Kurdish fighters, to fight [along] with the Syrian Kurds. The door is open for that because Turkey [now] says that it will allow limited numbers of Peshmerga to come through Turkey to help fight in Kobani. This is a significant political development. But at the same time, the worrying movement is the other way: refugees coming from Kobani through Turkey into the Kurdish region of Iraq. So far eleven thousand have come. They talk about ISIS beheading people and traumatized populations. They’re arriving here at the border [and are] cared for by [local] Kurds, but the Kurds have a very limited capacity. The refugee camps are overflowing. Most people are not in refugee camps: there are many, many thousands of people sleeping out in the open, in construction sites, in open buildings, and winter is coming and there’s just no way to care for these people.

And the UN doesn’t have the funds to take care of them?

The UN is facing, it will tell you, the biggest refugee crisis in its history. It will also tell you that every day around the world, thirty-two thousand people are forced from their homes. This is quickly becoming a permanent state of affairs that countries and the UN and refugee agencies are struggling to deal with. There’s just not enough money in donor countries, for instance, to maintain the levels of even food rations given to refugees around the region. A lot of the aid has been cut, the UN has been appealing for more money, but the UN isn’t the only answer. Part of the problem is [that] a lot of these people are in areas that are not accessible to aid agencies, so it’s an issue of money, it’s an issue of access, and it’s an issue that is not going to go away any time soon.

These people are not going to be able to return to their homes in Syria or even return to their homes in northern Iraq. The immediate problem is that the schools here are still filled with displaced people. Schools haven’t opened yet and there are tens of thousands of families, meaning hundreds of thousands of people, still living in unheated, unfinished buildings [as winter approaches].

It has from the start, but now [the Iranian government is] a bit more open about it. The Iraqi army essentially collapsed as ISIS rolled into northern Iraq. Iran stepped in to bolster the Shiite militias who secured Baghdad. When I talk to Iraqi security officials about this, they’ve been very open. They say, "We had to make a choice. We faced a huge threat against ISIS and … we could only fight them with the militias," and that’s really what we’re seeing happening. They’re going now because Prime Minister al-Abadi came into office pledging partly to make sure that there are no militias that are not under the control of the Iraqi government. The goal now is to ensure that there is a unified security force, but that’s just not in the cards any time soon. Shia militias have really become a fact of life.

What about American military advisors? Can they get the trained Sunni military involved?

In some of the fighting going on in Iraq, we’ve seen U.S. airstrikes, Iranian-backed artillery, all fighting ISIS, along with many other groups. It’s a very complicated fight and the U.S. is obviously an integral part of it, but it’s also controversial, [just] as Iran is. There are some militias that believe that their role is to fight the United States as well as ISIS. That sentiment still persists. The big hope, of course, is that [Iraq’s security force] would no longer be completely Shia-dominated, and that the Iraqi army would be more inclusive [of] Sunnis. That’s the goal around the country as well, politically as well as in terms of security. But that’s a long way off.

When the United States and Iraqi forces managed to get rid of Al-Qaeda in Iraq, the precursor to ISIS, they managed to do it largely with the help of Sunni tribes who had decided their best interests lay in fighting with the United States against al-Qaeda and not with al-Qaeda, [in what] was called the Sunni Awakening. The Iraqi army is trying to revive some form of that [Sunni support]. Now they’re dealing with a new, more complicated country, and a much more difficult place to rally Sunni support. It’s even more difficult now to rally Sunni forces, but it’s something that the government says it will do.

And what do you understand to be life like under ISIS?

When ISIS took over Mosul, in the first few days, they were putting up a very friendly face. They reassured Christian leaders that their churches would not be under threat, they told Mosul residents that everybody would be safe as long as they didn’t try to fight against them, they told police and soldiers that they could surrender and nothing would happen to them. All of those turned out to be lies.

Now what we find is a city where women don’t work, where schools are shut (although ISIS has tried to revive them), where the people don’t get paid, where there’s very little electricity, and yet ISIS is trying [to show] it has the trappings of a state. It’s trying to run the government offices, to force teachers to go back to school, to pretend that everything is normal, when in fact it could not be further from the truth.