Ryan C. Crocker, a veteran of U.S. Middle East diplomacy, welcomes the start of United States-led air strikes against ISIS forces in Syria but stresses Washington must remain committed to a long-term campaign against the group. "This is not going to be a campaign of weeks or months," he says. "It’s going to be one of years. And we need to make it clear to allies, to adversaries, and to our own people that we’re going to be in it with whatever it takes." Despite the expansion of action to Syria, Crocker recommends that U.S. operations focus on Iraq, which is more familiar ground and where political and military reforms underway—following the collapse of the Iraqi army—have the potential to create a solid ally against ISIS. 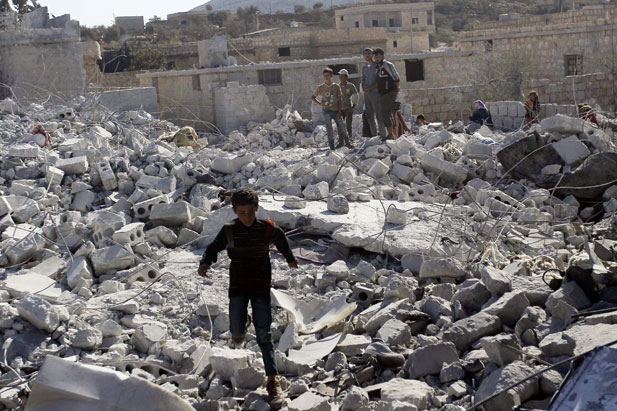 Residents inspect damaged buildings in what activists say was a U.S. strike, in Syria’s Idlib province, September 23. (Photo: Abdalghne Karoof/Courtesy Reuters)
More From Our Experts
Elliott Abrams
Why “Reforming” the United Nations Security Council is a Bad Idea
Steven A. Cook
How Israel and Turkey Benefit From Restoring Relations
Gideon Rose
Where Will American History Go Next?

Gathering from what you’ve written, you must be very pleased by the early Tuesday attacks on Raqqa, which is the headquarters of the Islamic State in Syria, and also against the Khorasan Group, an al-Qaeda affiliate in eastern Syria, outside of Aleppo.

It’s a good start. I am pleased that we made that start with a fairly extensive air campaign that also involved five other Arab states—Saudi Arabia, Jordan, Qatar, Bahrain, and the United Arab Emirates—flying and fighting with us.

You only get one chance to make a first impression. And the impression we made in Syria is a whole lot greater than the two 500-pound bombs we dropped in Iraq when we started that campaign.

Should the United States keep this going for a while? What’s your feeling?

President Obama set the goal fairly clearly, and it’s the right one: to degrade and ultimately defeat the Islamic State. We’ve begun the process of degradation. We need to see what the effect of Tuesday’s bombings was.

But again, as the president said, this is not going to be a campaign of weeks or months. It’s going to be one of years. And we need to make it clear to allies, to adversaries, and to our own people that we’re going to be in it with whatever it takes, however long it takes.

Do you think the American public has the stomach for a prolonged fight?

As is so often the case, that is going to be up to our leadership, in the White House, and on Capitol Hill, to keep reiterating why we’re there, why we’re doing what we’re doing, and why it’s important.

What do you know of this al-Qaeda group, Khorasan?

Little is known about them beyond the fact that it’s another offshoot of al-Qaeda. It is interesting that many of their members, including their leaders, seem to have been sheltered in Iran for some time, and have now shifted to Syria to take advantage of the chaos there.

I’m glad our intelligence was adequate to identify them as a particular threat directed against the United States, and that last night’s strikes engaged them as well. But we have got a formidable array of foes out there, and they’re not going to go away if we go away.

As a former ambassador to Iraq (2007-09), do you think it was a mistake not to push hard for the Status of Forces Agreement with Iraq before the U.S. pullout?

I do. We could have gotten that agreement if we had been a little more persistent, flexible, and creative. But what really cost us was the political withdrawal. We cut off high-level political engagement with Iraq when we withdrew our troops.

There were no senior visits, very few phone calls. Secretary of State John Kerry made one visit prior to this current crisis, mainly to lecture the Iraqis on how bad they were being for facilitating Iranian weapon shipments to Syrian President Bashar al-Assad. And we left them to their own devices, knowing that left to their own devices, it would not work out well.

What do you make of the new Iraqi prime minister, Haider al-Abadi and his efforts to form a new government?

He’s pretty much there. They still have to come to consensus on interior and defense ministers. And a lot of that has to do with not just cross-sectarian debates, but debates within communities. The Sunnis need to agree on who they want definitively to put forward as defense minister, and the Shiites on interior minister.

But he has made a great deal of progress, and he made that progress because we were all in on this. Secretary Kerry has made repeated visits. He, Secretary of Defense Chuck Hagel, [and] Vice President [Joseph] Biden, were on the phone repeatedly.

"We know the ground in Iraq far better than we do in Syria. There is more to work with there, individuals and units, we know."

Iraq sort of works when we are engaged—that was my experience as ambassador. And we were not engaged from 2011 until this latest crisis.

How would you deal further with the Assad government? Should we be working closer with the Syrian government, or is this standoff policy going to work?

The Pentagon said that this was not coordinated with Syria. I don’t think we should coordinate with Syria. The quickest way to lose our Sunni-Arab allies is to be seen as working with the Al-Assad regime.

And when I say "Sunni-Arab allies," I mean both those outside of Syria who participated in our strikes, and Sunnis within Iraq and Syria who have got to stand in front of a common enemy. They are going to be very reluctant to do that if they see us as backing a regime they hate.

What about the Iraqi army? Is it possible for it to get it back into any kind of fighting shape?

It is in fighting shape. The problem was its senior leadership. And again, it’s what happens when the United States disengages. If you look at it from former Prime Minister Nouri al-Maliki’s perspective, with Iraq’s history of military coups, his own coming of age as a member of a sectarian and persecuted political party, you are going to see an enemy behind every bush.

When he chose his commanders, he didn’t choose them on the basis of their leadership capability or their battlefield experience. It was loyalty. Could he be absolutely certain that they would never turn against him?

[Maliki] put individuals with no command ability [and who] were not a threat to him into command positions—when you look at what happened in June, it wasn’t the rank and file that broke first, it was the leadership. Division commanders suddenly decided they needed to be in Baghdad before they ever engaged with ISIS.

Iraqis have a strong military tradition. They’ve got good soldiers. They need good leadership. And clearly, the current government is aware of that. We’re in a position to help to get the right commanders in the right places, to serve their troops and their country well.

The Iraqi military is not rotten to the core. It was rotten at the top.

OK, then a revitalized Iraqi army should help out in countering this Islamic State threat, right?

The whole concept here is that the Iraqis use their own ground forces. And they’ve got a solid basis to work from. It just needs some reorganization and reassignments at the top, which I believe are underway.

But you’ve got the delicate question, of course, of the Kurds, with the Peshmerga, and how well the two Iraqi and Kurdish forces will work together. They have cooperated, as we have seen recently. Can they continue to do so?

And then what else is going to be necessary? We may have to play a bigger role on the ground, at least through Special Forces, as advisors.

Talk about the Special Forces. Do you think they would be useful against Raqqa in Syria, or should they stay in Iraq?

I would concentrate on Iraq right now. I would like to see more Special Forces embedded with more units, both regular and irregular: "regular," of course, meaning the Iraqi security forces; "irregular" [meaning] Sunni tribes who are carrying the fight in the west of Iraq to defend Ramadi, the provincial capital of Anbar. We should have Special Forces in there with them as we did when I was ambassador.

We know the ground in Iraq far better than we do in Syria. There is more to work with there, individuals and units, we know. We simply need to crank up the effort.

In Syria, we need to know more than we do. We have the best Special Forces in the world. They’ll take on any mission. But they should not do so at any risk.

What we’ve got to do is gain enough knowledge of who’s where on the ground, to know with whom they can move in, advise and assist, with some reasonable assurance that there’s security. And I don’t think we’re there yet.

Were you impressed by the fact that we got five Arab countries involved in their air attacks last night?

Yes. That was just absolutely crucial. This cannot be a fight between us and the so-called Islamic State, because that simply allows them to say it is loyal Muslims defending Islam against the infidels.

Well, that’s a little harder to say when you’ve got five other Arab, Sunni Muslim countries in the fight with you. Because that is a very clear statement [from] countries which represent millions of Arabs that the Islamic State does not represent Islam.