Last month’s executions of two Japanese hostages by ISIS have reignited a public debate in Japan about the country’s postwar pacifism. But recent moves by Tokyo to revise its counterterrorism policies should be viewed in the broader context of Prime Minister Shinzo Abe’s military ambitions, says Michael Auslin, an expert at the American Enterprise Institute. In addition to Islamic terrorism, he cites the North Korean threat, China’s rise, and uncertainty regarding the U.S. commitment to the alliance as big reasons for Japan’s reconsideration of its role in the world. And while the public remains divided on security issues, he says there is a growing awareness that, "the world is increasingly a dangerous place and you can’t simply try to avoid that." Regarding the U.S.-Japan alliance, Auslin says while Washington is pleased with Tokyo’s push for military self-reliance, Abe’s nationalistic politics necessitate a "delicate balancing act." 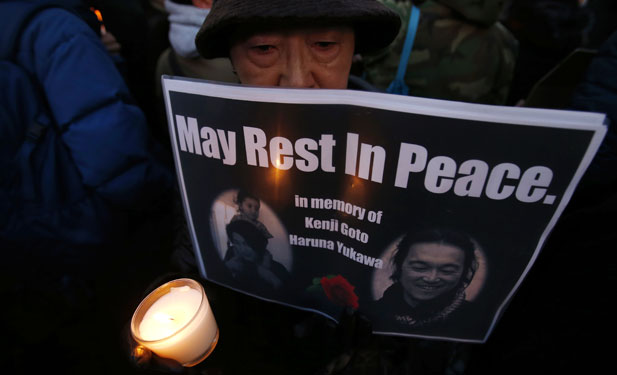 Abe has vowed to make ISIS "pay for their crimes," and Tokyo just revised its foreign aid charter, allowing Japan to fund non-military operations of foreign forces. How can we read these shifts in Japan’s posture?

These shifts are part of a larger move on Abe’s part to modernize and normalize the Japanese military. They speak to Abe’s desire to revise the ban on collective self-defense, which goes hand in hand with reassessing arms exports, new partnerships, and counterterrorism policies. So Japan’s recent moves should be understood in the context of Abe’s larger policy goals.

But there is a long road ahead. The legislative route requires approval from the Diet [Japan’s parliament] to pass laws that will allow Abe to revise Japan’s security policy. Then of course, there is the operational side. The military has to develop capabilities to actually undertake such counterrorism missions. Right now, Japan doesn’t have that. Very few countries do: The United States and the UK are the best, and South Korea also has a fairly good hostage response and special forces-type capability because of the threat from North Korea. In order for the Japanese to rescue hostages who may be thousands of miles away, they will need to build up and implement such capabilities. Abe is simply voicing that aspiration right now.

How has the recent hostage crisis informed the public debate about the future role of Japan’s military?

"Japan needs to modernize—not only to protect its interests, but also to work with its allies."

The tragedy of the two hostages could be seen as an impetus for Japan to take more assertive steps to protect its interests in the world. Or, conversely, it can be seen as a justification for Abe’s push for revised policies. The Asia Pacific is unsettled, and the rest of the world is very dangerous. Therefore, Japan needs to modernize—not only to protect its interests, but also to work with its allies. The hostage crisis will bring much more public attention to the issue of how to modernize Japan’s security [apparatus], but it does not represent a radical turning point. Rather, it’s merging with trends that were already afoot.

Where does the public stand on the prospect of a stronger Japanese military?

Japan remains divided on security issues. There is a lot of public opposition to the revision of the ban on collective self-defense. There is a lot of domestic opposition to any type of Japanese military operations abroad, even ones that are defensive. What precipitated this crisis was Abe’s decision to provide $200 million of non-lethal humanitarian aid to countries fighting ISIS. This is as anodyne as you can get, in terms of taking a stand on the ISIS issue. And yet there are voices in Japan that say even if you get involved at that level, there are repercussions. And in this case, they were the kidnapping and murder of the Japanese hostages.

This, too, is part of a much longer and not yet fully articulated national debate over Japan’s role in the world, its security, where the country should go, and what it should be doing. There is nobody in Japan who is unacquainted with the debate because the perceived threat from North Korea, concerns over China’s growth, and uncertainty over the United States’ willingness to remain a treaty partner [are all national preoccupations]. All of this feeds a debate on defense that has emerged in Japan over the past decades. The Japanese are now asking: How do we protect ourselves? Do we withdraw further from the world? What’s the best path? Japan is still a very divided country but it’s one that I think realizes that the world is increasingly a dangerous place and you can’t simply try to avoid that.

What type of regional blowback can we anticipate if Abe is able to repeal the ban on collective defense?

Abe has a very long road ahead of him to get any kind of constitutional reform through the Diet and to figure out which laws will allow Japanese armed forces to participate abroad. Even then, Tokyo will have to prepare them to do so, which cannot be done overnight. So far, the reaction at home has been mostly negative. China and South Korea repeatedly remind their people, and the rest of Asia, that Japan is not trustworthy, that it has a violent past that it has not accounted for, and that any moves toward greater Japanese military or security action—regionally and in the rest of the world—is something to be worried about.

That being said, there’s not much that Japan’s neighbors can do to stop it. Certainly, China will be far more willing to oppose Japan over things like the Diaoyu/Senkaku Islands, maintaining its own military posture, and building the types of weapons that can potentially threaten Japan. Further moves to rewrite Japan’s foreign policy are not likely to make diplomatic relations any worse, because they are already in a terrible state right now. But what it does mean is that we cannot expect relations between Japan and its neighbors to get any better, especially the more Abe and the Japanese government decide to move forward with reforms that they consider to be in Japan’s best interest from a security perspective.

How would Washington view a bolder Japan?

A stronger Japan has been a long-term goal for Washington for some time now. The U.S.-Japan relationship can be viewed through two prisms: politics and policy. Regarding policy, Washington wants a capable ally, who can handle the vast majority, if not all, of its own defense. Washington also wants an ally who is able and willing to work with it more; who has the tools and experience [to be an effective partner]; and who shares U.S. values in order to provide encouragement for other nations to help uphold security and stability in Asia Pacific. And therefore a country that can contribute to humanitarian operations and ultimately play a larger role in providing public goods.

"A stronger Japan has been a long-term goal for Washington."

The political side of the relationship gets a little bit more complicated and depends on the personalities involved. It is no surprise that the Obama administration is wary of Abe. There are those in the administration who are uncomfortable with  Abe’s reading of the past and his future ambitions. They are concerned about what role a more independent Japan might carve out in the region. Ideologically, the Obama administration was undoubtedly closer to the Democratic Party of Japan (DPJ) when they were in power. But U.S.-Japan relations were worse under DJP leadership because it upended the realignment process, which raised questions about the future of the alliance.

Washington has not had a Japanese partner to work with long-term because of the frequent turnover of premierships until Abe returned to power. This year’s going to be very sensitive because of the seventieth anniversary of the end of World War II. There are all sorts of questions of what Abe will be saying and what type of government statements will be put out to mark the occassion. So the politics of the relationship are more complex than the policy side. The policy itself is going very well, it’s what every administration since Ronald Reagan’s has wanted. But the politics make it more of a delicate balancing act.