Skip to main content
The Legal Fight Over Trump’s Authority

President Donald J. Trump’s executive order to suspend travel and immigration from several Muslim-majority countries has triggered a slew of legal challenges across the country. In the most high-profile case, a federal appeals court in California upheld a lower court’s nationwide injunction on the order. The Trump administration, which says the order is necessary to protect against terrorism, may appeal the case to the U.S. Supreme Court.

Cristina Rodriguez, law professor and former clerk for Justice Sandra Day O’Connor, expects the case to move swiftly through the legal pipeline because of the significant constitutional issues at stake. If the government’s national security arguments are taken seriously, "it would be awkward if not irresponsible for the courts to leave the issue unresolved for so many months," she says in a written interview. 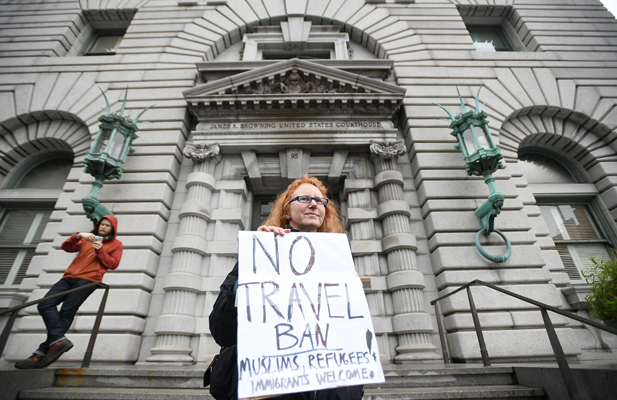 What is this legal battle about?

Washington State (later joined by Minnesota) brought a challenge to two major components of President Trump’s Executive Order (EO), “Protecting the Nation from Foreign Terrorist Entry to the United States.” The states contend that the ninety-day ban on entry of foreign nationals from seven Muslim-majority countries, as well as the 120-day suspension of the refugee resettlement program (and the indefinite halt to the resettlement of Syrian refugees), exceed the president’s authority and violate numerous provisions of the Constitution.

The Seattle district court issued a nationwide temporary restraining order against the entire EO, preventing it from going into effect. The government thus resumed issuing visas to nationals of the designated countries and admitting visa holders and refugees already approved for resettlement. The other courts that have confronted a challenge to the EO have simply ordered officials not to remove immigrants who actually arrive at ports of entry, stopping far short of invalidating the ban as a whole. And one district court in Massachusetts, having considered the merits of the legal arguments against the ban, has found in favor of the government.

What are the primary constitutional and statutory issues in question?

The EO is grounded in the president’s statutory authority under section 212(f) of the Immigration and Nationality Act (INA), which authorizes the president to suspend entry of “aliens or any class of aliens” he deems “detrimental to the interests of the United States.” On a few occasions, presidents have used this power to broadly exclude nationals of certain countries. President Ronald Reagan invoked this statute to justify interdiction of Haitians on the high seas to prevent them from reaching the United States, as well as to bar the entry of Cuban nationals for a period of time, with some exceptions. But in the vast majority of cases, presidents have used 212(f) authority to target a specific subclass of nationals from a given country, primarily those who have engaged in human rights violations or crimes or have been linked to a particular foreign policy or national security crisis.

Though the Trump EO flows from this authority, those who have challenged it in court argue that it violates provisions of the Constitution and should therefore be struck down. Though the nature and scope of the claims differ depending on whether the focus is the seven-country ban or the suspension of refugee resettlement, they fall under three broad umbrellas:

Washington State also pointed to a statutory provision, added to the INA in 1965, establishing that “no person . . . shall be discriminated against in the issuance of an immigrant visa because of the person’s race, sex, nationality, place of birth, or place of residence,” though it remains unclear whether this provision limits the president’s 212(f) authority, and it otherwise applies only to the adjudication of visa petitions for lawful permanent residency, not to visas generally.

Can you explain the San Francisco appellate court’s decision?

The three-judge panel of the Ninth Circuit denied the government’s motion to stay the district court’s temporary restraining order, meaning that the EO remains on hold and we have returned to the status quo prior to the EO’s issue.

Does anything in particular about the ruling strike you?

At least four elements of the court’s decision bear noting at this very early stage:

How does the legal process unfold from here?

The administration could withdraw the EO and attempt to craft a more constitutionally sound one, thus mooting the case. But if it chooses to proceed—the more likely scenario—the government may seek two forms of review to appeal the ruling: by the Ninth Circuit sitting en banc, meaning from a panel of eleven judges, or by the Supreme Court. That motion would go to Justice Anthony Kennedy in the first instance, as he covers emergency orders from the Ninth Circuit. But I would predict that he’d refer the motion to the full Court given its extreme sensitivity and national importance.

“Ultimately, the case will likely return to the trial court for a preliminary injunction hearing, which will enable more extended briefing and fuller elaboration of the legal claims and the factual record.”

Whatever the Supreme Court decides with respect to the stay, it is doubtful that it will have much to say about the merits of the constitutional claims, because the case record is still so underdeveloped. Five justices are unlikely to vote to overturn the temporary restraining order and permit the ban to go back into place, not least because resuming the exclusions contemplated by the EO would be highly destabilizing. Ultimately, the case will likely return to the trial court for a preliminary injunction hearing, which will enable more extended briefing and fuller elaboration of the legal claims and the factual record.

How long until this is all resolved?

If the case makes its way to the Supreme Court on the motion for a preliminary injunction, it could take some time for final resolution. Though in the ordinary course of things, a case the Court agreed to hear this spring would be argued next fall, this is precisely the sort of case in which the Court might add an extra day of argument this term so as to resolve it by June.

Given the national importance and high stakes of the issues involved, I would expect the federal courts to move this case swiftly through the pipeline. The case implicates not just weighty constitutional interests but also the scope of presidential control over national security and immigration policy. If we take the government’s national security arguments seriously (though the courts below thus far have lamented the lack of evidence to support the administration’s judgment), it would be awkward if not irresponsible for the courts to leave the issue unresolved for so many months.

How has the Supreme Court navigated these types of cases?

The government is likely to have the upper hand before the Supreme Court. The constitutional claims noted above will be difficult to establish. The Court has never held that nonimmigrants (i.e., those on temporary visas, in contrast to lawful permanent residents) receive due process protections on their return to the United States, much less that noncitizens who have never entered the United States and are not otherwise subject to U.S. control have constitutional rights.

“This case presents a unique opportunity for the Court to make clear that the incantation of national security or immigration is not enough to insulate government action from review.”

The government can make a plausible case that the EO, on its face, targets countries because of the risk of terrorism that emanates from them, not because of religion. In the past, the Court has said that the government need only have a “facially plausible and bona fide reason” for its immigration choices, and courts are loathe to second-guess the national security judgments of the executive.

But this case presents a unique opportunity for the Court to make clear that the incantation of national security or immigration is not enough to insulate government action from review. Like the courts below, it could insist that the government come forward with actual evidence to support its judgments. The sloppy implementation of the order, the apparent failure to run it through inter-agency review before its release, and anti-Muslim statements by Trump and his surrogates could all embolden courts to subject the president’s action to heightened constitutional scrutiny. What is more, the Supreme Court has not upheld a categorical exclusion based on race or similar characteristics since the era of Chinese exclusion in the late nineteenth century. If the Court is persuaded that the EO was motivated at least in part by anti-Muslim sentiment, it could finally make clear that racial and other similar exclusions are anathema to the U.S. legal order, including in the country’s exercise of its sovereign functions to admit and exclude.

You mentioned the administration could modulate the EO. How could it do so?

The president could withdraw the EO and attempt to draft a new one that raises fewer concerns. An order that simply calls for the development and application of more stringent vetting procedures for visa applicants and refugees from certain countries likely would pass muster. An order that prohibits issuing new visas to nationals from certain countries identified for national security reasons, or that excluded from the United States only those existing visa holders who have not yet been admitted for the first time, would also raise fewer if any constitutional concerns. It would apply only to noncitizens who have not yet developed a relationship with or been inside the United States. But even these last two modifications of the so-called travel ban might come under scrutiny if the courts are persuaded that the processes behind the original EO or the designation of the countries for exclusion were infected with anti-Muslim bias.