President Obama’s speech at the National Defense University on May 23 sought to explain a number of controversial counterterrorism policies, including targeting killing and detention of militant extremists. CFR’s John Bellinger says the address was "most notable for its antiwar message," and calls to take the country off a perpetual wartime footing. Bellinger lauds the president’s efforts to improve transparency and said he set new standards for the use of drones, but says the speech fell short in laying out a path for revising detention policy and the law used to justify drone strikes. 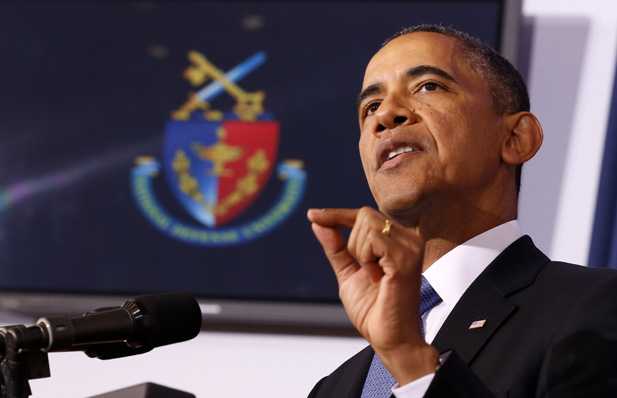 What was your assessment of the president’s speech last week?

Indeed, in parts of the speech, he seemed to be suffering from cognitive dissonance. He expressed concern about his administration’s own leak investigations and a desire to repeal the Authorization for Use of Military Force Act, despite the fact that the White House has relied on the AUMF to conduct hundreds of drone strikes. In this regard, it was much more of a political speech than a substantive national security speech like the previous addresses on counterterrorism by John Brennan.

The speech and, according to press reports, the interagency debates that preceded it are also similar in many ways to President Bush’s September 2006 speech, in which he announced the closure of the CIA detention sites and transfer of the CIA detainees to Pentagon custody. In both cases, the president announced and explained significant retreats from controversial CIA counterterrorism programs, after prolonged interagency discussions about how to do so.

What are your thoughts on the newly released targeting standards?

The part of the speech that broke the most new ground was the announcement that President Obama had signed new Presidential Policy Guidance for use of force against terrorists. The guidance is classified but has been shared with Congress. In conjunction with the speech, the White House released a Fact Sheet that provides more detail on targeting standards. And the day before the speech, Attorney General Eric Holder sent a letter to Congress acknowledging the killing of Anwar al-Awlaki and three other Americans and specifying new legal standards for targeted killings. Together, these documents reflect laudable efforts by administration national security lawyers and counterterrorism officials to achieve more transparency and clearer standards for the use of drones, although these efforts have been overshadowed by the more political statements of the speech.

Substantively, the new standards appear to set a higher bar for the use of drones, especially "outside areas of active hostilities." For example, the same standard would be applied for strikes against Americans and non-Americans, i.e., that the individual must pose a "continuing and imminent threat" of violence to U.S. persons. And the threat must be to U.S. persons, not U.S. allies or other U.S. interests. Moreover, drone strikes will not be used where it would be feasible to capture the target, and there must be a near certainty that a drone strike must not cause death or injury to non-civilians.

Together, these public and stricter standards should address some of the concerns of both domestic and international critics of drone strikes. Indeed, some Republican members of Congress have criticized the Obama administration for placing too many restrictions on drone strikes. The standards will also help to close the Pandora’s Box the Obama administration has opened by its heavy reliance on drones; the new standards set a high bar for other countries to meet if they want to cite U.S. standards as a precedent.

At the same time, the new drone strike policies still raise many questions. For example, what area constitutes the "area of active hostilities?" Will the stricter policies apply to Pakistan, where the largest number and most controversial drone strikes have occurred? Will "signature strikes" continue to be permitted? And what constitutes an "imminent" threat? The Obama administration, like the Bush administration, has been criticized for adopting a flexible concept of imminence.

The president talked about the need to "engage Congress and the American people in efforts to refine, and ultimately repeal, the AUMF’s mandate." What are your thoughts on these remarks?

The president surely recognizes that Congress will not repeal the AUMF anytime soon, so his call for repeal is empty rhetoric. Moreover, if the AUMF were repealed, it is not clear what legal authority the president would rely on to conduct drone strikes or to continue to detain terror suspects captured outside the United States--both of which are counterterrorism activities the president says he intends to pursue. Is the president suggesting that he (or future administrations) should rely only on the president’s Article II powers under the Constitution--powers that President Obama and administration officials harshly criticized his predecessor for asserting?

At the same time, the president was clear that he would not sign laws designed to expand the AUMF’s mandate. This is an obvious warning to congressional Republicans who support a broad expansion of the AUMF to provide authority to address new terrorist threats and groups that have arisen since September 11. I have long supported a refinement of the AUMF both to provide clearer legislative authority for contemporary counterterrorism operations and to provide more protections for those detained or targeted, but I recognize that such a refinement may not be feasible in today’s political climate.

What’s your reaction to Obama’s comments on detention policy?

The announcements with respect to Guantanamo mostly amounted to a restart of efforts he had previously suspended, such as appointing special envoys at the State Department and Defense (the announcement of two envoys seems rather odd) to handle detainee transfers and lifting his administration’s suspension on transfers to Yemen. For those of us who have long supported the closure of Guantanamo, these announcements are long overdue, and appear to be a response to criticism from human rights groups that the president had abandoned his pledge to close the detention facility.

The president apparently could not resist a further political jab at his predecessor, claiming that Guantanamo should never have been opened and that it was intended to prevent detainees from challenging their detention. He has never said how a criminal law enforcement approach would have worked for tens of thousands of detainees who were, as he acknowledges, "captured on the battlefield." He also fails to mention the thousands of detainees his administration itself held for four years at Bagram and other facilities in Afghanistan, while resisting efforts by these detainees to challenge their detention in federal courts.

What do you think should be done with the Guantanamo detainees that cannot be prosecuted, as the president mentioned, because of evidentiary problems or for other reasons?

The president needs to begin to lay the groundwork for the repatriation of a larger number of detainees, perhaps by trying to find "halfway houses" where detainees can be demilitarized in their home countries. Despite the political and security complexities, it is unsustainable for the United States to detain a large number of detainees without trial for another fifty to sixty years.

In his speech, the president also called for a review of DOJ’s guidelines governing investigations of journalists. What are your thoughts on these leak investigations?

When I was in the Criminal Division of the Justice Department, the intelligence agencies regularly complained that DOJ was not doing enough to investigate leaks of highly classified intelligence information. It’s a delicate balance to conduct aggressive leak investigations without chilling press freedoms.

A bipartisan group of former senior Justice Department officials, including Jamie Gorelick, who served as deputy attorney general in the Clinton administration, wrote an excellent op-ed in the New York Times last week defending the Justice Department’s (and implicitly, the attorney general’s) investigative steps involving journalists. The FBI director and the heads of the intelligence agencies cannot now be very happy when the president suggests that he has concerns about these investigations.