The first visit of Pope Francis to the United States features highly anticipated speeches to a joint session of the U.S. Congress, a papal first, and to the UN General Assembly. The pope will use these occasions and other stops along his trip to speak out on behalf of populations at risk due to war, economic hardship, or climate change, says Kenneth Himes, an expert on Catholic social teaching at Boston College. “He wants to get the face of the poor before most Americans, and not just Americans,” says Himes. “He wants to make sure that we don’t assess society, we don’t assess global order, from the perspective of those at the center of it.” 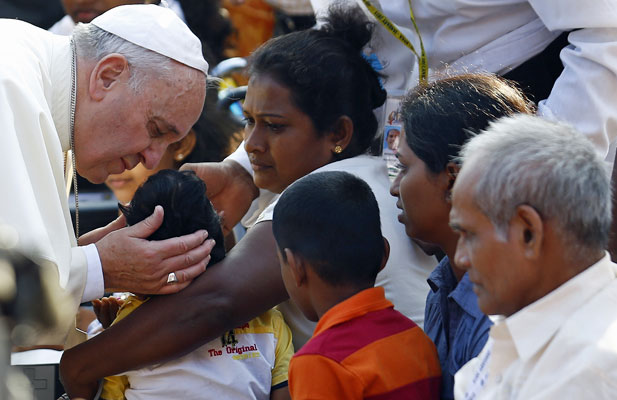 The pope is a rare world religious figure empowered with a diplomatic as well as spiritual role. How should we view his trips to Cuba and United States in terms of Vatican foreign policy goals?

It’s very interesting that first he is going to Cuba where, as we know, he did have a role in bringing the United States and Cuba into conversation, and that is a big part of his agenda in most places: to foster dialogue. A fundamental conviction of the Vatican is that diplomacy is underutilized and that too often we set things up in adversarial ways that then become contests of power. Going to Cuba first and then the United States is a symbolic reminder to people in these two nations that have been at odds, that this pope is welcome in both.

I don’t know what the pope thinks is going to come out of these trips. Part of his itinerary in the United States is to places of power and prestige—the floor of Congress, meeting with the president at the White House, at St. Patrick’s Cathedral [in New York], at the UN [headquarters],  as well as the World Meeting of Families in Philadelphia. In all three of these cities he is also going to meet marginalized people—whether it’s people in incarceration, the homeless, children in poor areas. He wants to get the face of the poor before most Americans, and not just Americans. He wants to make sure that we don’t assess society, we don’t assess global order, from the perspective of those at the center of it. His message will be ‘who are the people who are left out of the society and our global order?’ I think he wants to be a spokesperson for those people.

He will be the first pope to address a joint session of Congress. Could he be expected to bring up the U.S. embargo against Cuba or climate change?

I don’t know how specific he’s going to want to get. There is likely to be some reference to the climate change issue [the pope’s June 2015 encyclical on the environment called climate change one of the principal challenges for humanity]. I wouldn’t be surprised if he at least refers to the importance of having sustainable economic policies and encourages people to look at climate change and how it is affecting poor nations. Whether or not he’s going to get into siding with one side or the other in Congress on specific policies, I’m not sure he’s going to go there.

The Vatican and United States have at times made common cause and at times been at cross purposes. Can you characterize the relationship and how it has evolved?

The rise of totalitarian regimes in Europe and the experience of fascism in Italy, Nazism in Germany, World War II, the rise of communism, and the post-World War II divisions drove the Vatican in its foreign policy to see the United States as a necessary and useful ally. In the Cold War period of East-West tensions it was very clear the Vatican saw the West as having the better of the argument in terms of what system was more humane.

As the East-West divide became less and less the lens through which to look at the global situation, however, and it became more and more a North-South divide, you get a different set of priorities [stressed at the Vatican]. You see this already with Pope Paul VI, in an encyclical he wrote on development in the late 1960s, you see it with the rhetoric of John Paul II, which sometimes was ignored because the message wasn’t always congenial to people here in the United States. You see it in Benedict XVI, who had some strong words about the globalized economy, and certainly you see it with Francis.

What will be the focus of his speech to the UN General Assembly?

He will be the fourth pope to address the UN General Assembly. If you look at those other papal speeches, they are broad. He might make something like sustainable development or integral development the overarching theme, but within that I suspect he’s going to touch on a number of themes. I would be very surprised if he doesn’t address the migrant issue [in Europe]. He has spoken recently to encourage Catholics on the continent to be much more hospitable to migrants. One of the first things he did as pope was go to [the Italian island of] Lampedusa, which was one of the gateways through which migrants were coming to Italy.  He’s going to speak to the plight of Christian communities in Syria and Iraq, I suspect. The population of Christians in the Middle East has really declined because they have been caught in various conflicts, and in some nations their survival as a community is at risk.

Another issue that is sort of off the radar here in the U.S., for the most part, is nuclear disarmament. That’s a longstanding concern of the Vatican’s. The Vatican has a clear position that it resists nuclear proliferation, but it also believes that it will be very hard to maintain the emphasis on nonproliferation when those with nuclear weapons continue to hold onto them and even try to fund and establish another generation of nuclear weapons, such as what the United States is considering. I wouldn’t be surprised if the nuclear theme comes up, with the pope raising moral and legal obligations of states under the Non-Proliferation of Nuclear Weapons Treaty to try to move toward disarmament. And then finally I would be surprised if he doesn’t say something in terms of fairness in global trade and fairness in terms of the benefits of economic globalization, and that all nations need to share in it, not just those nations that can dictate the terms of international trade and international arrangements.

How do we measure what kind of impact this visit can have?

This pope has some real personal charisma, and I wouldn’t be surprised if in his meetings with congressional leaders or President Obama or world leaders attending the UN assembly he might have influence in private by calling on them or urging them to take more seriously one or the other of the concerns he wishes to raise.

"I wouldn’t be surprised if the nuclear theme comes up, with the pope raising moral and legal obligations of states under the NPT to try to move toward disarmament."

But what we need to look for here is how he is trying to reset the global agenda and that’s not going to come about because he has any belief that he can dictate to others.  What he’s going to try to do is push some issues, get the concerns of the poor on the table, so that at least the voice of the poor and the concerns of the poor get heard in the corridors of power. What difference will that make? A lot depends on the goodwill of others involved, it depends upon whether social movements can carry this forward. Will other members of the Catholic Church rally around him on this? Will priests be preaching some of this in pulpits? Will cardinals and bishops be speaking about this with governors and senators and congressional leaders in their states? It has to be a multilevel sort of activity. Will Catholic universities and colleges promote conversations and conferences and research on these questions? I don’t think anyone expects this pope has levers he can pull that will easily change nations or the global agenda, but I do think there’s a possibility that he moves some questions and concerns to the front page.

Some people say what can enhance the credibility of the pope’s voice on these issues is the degree to which the church addresses its own divisive issues, such as the role of women, the clergy sex abuse cases, and the church’s position on homosexuality. To what extent will he address those on this visit?

My guess is he will not intend to address such topics in public. Whether he can avoid it, I don’t know.  It doesn’t seem there will be many venues in which there will be unscripted back-and-forth [meetings] that would involve a surprise question. But two things we’ve seen with this pope: He’s more willing to put aside a text and talk more spontaneously than prior popes have done; and he has held lengthy sessions with the press on his flights to and from locales.  That could be a forum where questions regarding internal church issues arise.

On clergy sex abuse, Francis has done some things in his two years as pope that have demonstrated he is serious about this and is serious about not limiting the process to individual priests. He is willing to go up the line to look at accountability for how bishops have handled this issue. While there are still people who rightfully feel they have been betrayed by the church, he may feel he can speak to that with some credibility.

On the issue of same-sex marriage, or the issue on caring for divorced and remarried Catholics, my guess is he will likely not speak to these unless he is pressed to under certain situations. Same-sex couples and supporters of same-sex couples are probably not sanguine about the church doing something about this and troubled by what they see as church obstruction or even opposition in this area.  I don’t really know that he would say much more than that ‘we wish to reach out to these people,’ and he will talk a language of compassion, openness, and willingness to dialogue, but my sense is he will not go near the question on a doctrinal level.