Skip to main content
The Promise of a U.S.-India Partnership

As India moves away from nonalignment it has begun a process of “structural realignment” with the United States that could enormously boost the economic and security interests of both sides, says a new CFR Independent Task Force report. Improved bilateral relations between the world’s two largest democracies would also help counter authoritarian trends advanced by Beijing and Moscow, says Joseph S. Nye, co-chair of the task force and professor at Harvard’s Kennedy School. “A growing Indian economy provides benefits for the health of the world economy, as well as the United States through bilateral trade and investment,” says Nye. 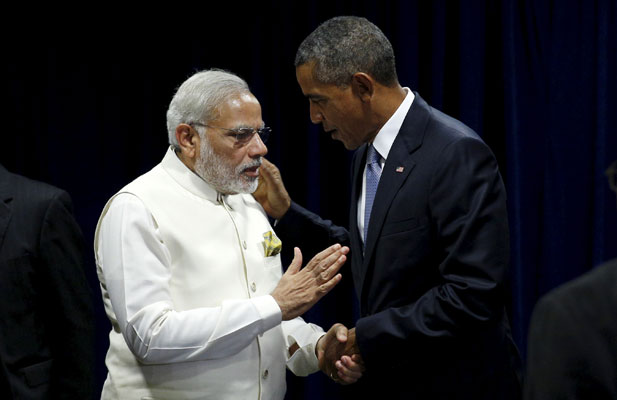 The report argues that U.S. and Indian interests are in a process of “structural realignment.” Why is this important?

If you look at the trends in the world, both China and Russia are running in an authoritarian fashion. There’s a concern about a closer relationship between China and Russia that would strengthen authoritarian points of view. India and the United States are both democracies and the extent to which Indian and American interests and values coincide is crucial to countering this authoritarian tendency.

It is in the interests of the United States to see a world in which democratic societies prosper. India is the world’s largest democracy, and the ability of the United States and India to work together will boost the climate for democratic ideas. Both countries will also reap the benefits that come from closer bilateral economic and defense ties.

What are some of the areas of common interest?

There is an obvious economic interest. The United States hopes to increase its trade with and investment in India. There’s also a defense interest. Both India and the United States want good relations with China, but the countries also want to make sure that China does not act as a bully in the Indo-Pacific region. Good relations between New Delhi and Washington in the defense area would help, including enhanced air, land, and sea military exercises and technology transfers, trade, research, co-development and co-production of defense-related material and services.

More From Our Experts
Manjari Chatterjee Miller
Visualizing 2023: Trends to Watch
Kenneth I. Juster
The Quad Should Speak Out Against Russia’s Aggression Toward Ukraine
Alyssa Ayres
Human Rights and Democracy in South Asia

Then there are other interests in areas like cybersecurity and the governance of the Internet where India, the United States, and Brazil have had a more democratic orientation than Chinese and Russians stances. China and Russia have been promoting the idea of regulation of the Internet by the International Telecommunications Unit—the ITU—and by the UN, which would strengthen state sovereignty over aspects of the Internet. The United States and India have stressed what is called a “multi-stakeholder approach,” which involves governments, along with private entities and nonprofit organizations.

The report calls for a joint-venture approach to economic relations. Can you explain this?

“Both India and the United States want good relations with China, but the countries also want to make sure China does not act as a bully in the Indo-Pacific region.”

The joint-venture idea is a metaphor drawn from business where firms want to keep their overall independence rather than merge, but want to cooperate deeply on certain issues where both will benefit. We felt that could be a good model for U.S.-India cooperation.

India now has a higher rate of economic growth than China. And though it is still a smaller economy than China’s—about a fifth the size of the Chinese economy—it is getting to a range were the growth of the Indian economy can help global demand and be useful to the world economy. This is especially true as Chinese growth rates slow down. In that sense, a growing Indian economy provides benefits for the health of the world economy, as well as the United States through bilateral trade and investment.

How does India fit into the U.S. Asia strategy?

The United States wants to be a major actor in Asia, in both economic and security terms. Washington believes that the strong and growing regional Asian economy is good for the world and good for the United States. As China bolsters its economic and military power, Washington also believes that it is important to shape an environment in which China has incentives to act responsibly.

There are three major powers in the Asian balance of power—China, Japan, and India—and the United States is a more distant actor but heavily involved in the process.  If the United States, India, and Japan work together, they can shape the environment in which China makes its choices. India plays a critical role in helping to build such an environment, on both the economic and security fronts.

How does China’s rise shape the U.S.-India relationship?

The United States is not looking for an alliance against China; neither India nor the United States are thinking in those terms. But they do want to forge a closer relationship where they are able to work together to make sure China behaves responsibly.

Think of the dispute between the United States and China about claims over the South China Sea. China is building artificial islands and claiming territorial rights that go with them, which is counter to the Law of the Sea Treaty. India’s decision to take a position like that of the United States, which emphasizes freedom of navigation and upholding the Law of the Sea is helpful diplomatically. Additionally, the fact that the Indian and U.S. navies exercise regularly together (e.g. the recently held Malabar exercises) sends a signal for China to act responsibly.

Washington and New Delhi are looking for a common position on issues like naval power in the Indian Ocean or approaches mitigating territorial disputes in the Asia Pacific. That doesn’t require a military alliance, it just requires friendly relations and cooperation between navies.

Economically, China has indicated an interest in joining the Trans-Pacific Partnership—the U.S.-led free trade agreement between twelve Pacific Rim countries. In the future, it may also be possible at some stage for India to think about joining. A more inclusive trade agreement is better for global welfare as well as the economies of the member nations. While increased membership may not occur soon, TPP should remain an open regional arrangement.

What are some of the potential challenges to improving ties between Washington and New Delhi?

Even though there is an overall structural alignment of U.S. and Indian interests, their potential divergences could make it harder to coordinate policies.

“The question of the role of women is going to be absolutely crucial for India.”

There is protectionism in all democracies. Both India and the United States face pressures from vested interests which prevent the two countries from reaching levels of the trade and investment that otherwise would be beneficial to both parties. There are various industries and economic areas where the United States and India have not always seen eye to eye.

The United States also needs to be clear with Pakistan that it will not tolerate terrorist attacks within Indian borders, such as the 2008 Mumbai attack. If a Mumbai-type attack again originates in Pakistan, it could be met with a forceful response which could lead to an India-Pakistan war. The United States has long tried to dampen prospects of war in South Asia.

Afghanistan is another area where Washington and New Delhi have a common long-term interest in wanting a stable Afghanistan, free of Taliban control. Yet, the question of how long the U.S. forces will stay and what they do has created anxiety in New Delhi.

How has India’s environmental policy affected its ability to meet its economic development goals?

Coal is going to be a central source for India’s power generation in the near term. The country’s reliance on coal-fired energy poses problems for India to sign onto meaningful CO2 emissions controls. The United States has been trying to persuade India to increase the proportion of renewable energy in its fuel supplies, for its electricity in particular. Effectively introducing alternative energy sources will be crucial for India to reduce the carbon intensity of its economy without jeopardizing growth rates. But I suspect Indian coal consumption will still be on the rise. If the growth rate stays high and India fails to alter its energy mix, then the country’s commitment to taking action to mitigate the effects of climate change will be challenged internationally.

What role is there for women in India’s rise?

The question of the role of women is going to be absolutely crucial for India. You have a population that’s growing rapidly but you still have three quarters of the population that’s illiterate, and for women the proportion is even higher. When you increase population, it is an asset when it’s educated and it’s a liability if it’s not. Prime Minister Narendra Modi has made a number of suggestions to better educate women and integrate them into the workforce, but he must now implement them. The fact that India is not fully utilizing the human resources of its girls and women is going to hold them back from the type of development that the United States hopes they’ll experience.