The biggest killers in low- and middle-income countries are not Ebola, malaria, or HIV/AIDS. Rather, they are cancer, cardiovascular disease, diabetes, and other noncommunicable diseases (NCDs), according to CFR’s new Independent Task Force Report. NCDs affect younger populations in developing countries, killing more than eight million people under sixty in 2013. This has serious economic consequences, says CFR Senior Fellow Thomas J. Bollyky, the Task Force’s project director. The United States can stem the rise of what the report calls an emerging global health crisis by providing aid and cost-effective technical assistance to developing countries, Bollyky says. 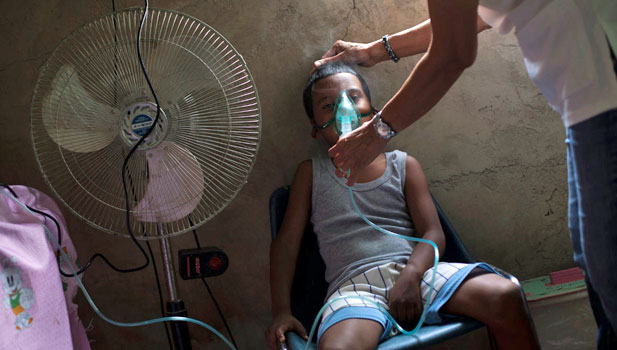 A nine-year-old boy receives treatment for his asthma at an outpatient care center in Venezuela. (Photo: Carlos Garcia Rawlins/Courtesy Reuters)

The report calls the rise of noncommunicable diseases in low- and middle-income countries a crisis. Why?

It’s an emerging crisis because the numbers of people in low- to middle-income countries developing NCDs is increasing dramatically fast. The incidence of cancer, diabetes, heart disease, and other NCDs in low-income countries is rising 300 percent faster than the rate of decline in infectious diseases. In lower-income countries it’s even faster. In many of these countries, NCDs are the biggest cause of underage death and disability.

And it’s not just the speed by which it’s happening; it’s the populations that are getting these diseases. They’re young and they’re having significantly worse health outcomes than in a wealthier setting. Given the scale at which this is happening, it’s having big economic effects.

NCDs are emerging in part because people in low- and middle-income countries are living longer. What other factors have led to the rise?

There have been real improvements in reducing infant and child mortality in low- and middle-income countries, which is great news. Living longer means of course you’re more likely to get a disease like diabetes, cancer, or cardiovascular disease. But what’s surprising in these settings is that people are getting these diseases so young, in such great numbers, and with such bad outcomes.

What’s really driving that is a combination of factors. First, we’re not seeing the improvements in wealth and health systems that we saw in wealthier countries when they transitioned from children and adolescents being afflicted mostly with viruses and parasites to adults and children affected by diseases like cancer and diabetes. Low-income countries have just reached—or in this year will reach—an average life expectancy of sixty years. Again, that is great news, but their per capita income is one-fourth that which existed in high-income countries fifty years ago, when those countries reached that threshold, so people are a lot poorer. Health systems also have not improved to the same degree that they did when wealthy countries made this epidemiological transition.

"In many countries, NCDs involve more people being sick, more people perishing, and greater economic consequences than many of the global health threats we currently invest in."

Lastly, we’ve seen a change in urbanization and consumer markets. Cities in many low- and middle-income countries are growing really fast without improvements in infrastructure. People in those settings are more susceptible to tobacco use and air pollution, and are less likely to have access to adequate nutrition. With increased global integration of consumer markets, countries have less control over what is sold in their markets. Supermarkets now reach even the rural areas of many developing countries, and it’s led to a big shift in diet. More and more people are living on fewer and fewer foods. Fruits and vegetables have declined in diets in many developing countries.

How can public-health advocates reduce tobacco use when there are powerful interests to the contrary and when smoking is pervasive in many places?

The good news on tobacco is that tobacco-control strategies work: they’ve worked in low-income settings and high-income settings, poor and wealthy countries alike. Mexico, which has long had high cigarette taxes, is one of only four countries worldwide to reduce smoking by more than 50 percent in both men and women since 1980.  The United States cut its smoking rates by more than half, from 42 percent in the 1960s to 18 percent now. Bhutan has implemented effective tobacco control programs.

So tobacco control works. The most effective forms are taxation, limits on advertising, and public-smoking bans.

However, many low- and middle-income countries still need assistance on tobacco. Tobacco taxes are revenue-generating, but you need to be able to implement and enforce them, and that takes a little money and technical capacity. There can be strong industry opposition.  Increasingly, governments are overcoming that opposition, but U.S. government support to raise the priority of tobacco control and provide interested countries technical assistance can certainly help.

I’m actually quite hopeful on international tobacco control. We—particularly in the United States—are just not doing a lot internationally to support the implementation of those strategies right now, but if we did, it would yield real benefits.

The report highlights efforts to fight HIV/AIDS, malaria, and tuberculosis as examples of programs that have galvanized international support for global health. Do you think similar programs for preventive measures like cancer screenings and human papillomavirus (HPV) vaccinations could raise as much support?

There are fewer differences between NCDs and the diseases prioritized in global health than most people might think. HIV/AIDS, malaria, and poor maternal and newborn health abroad are not significant direct threats to the United States. We invest in them because they are diseases of poverty and because many of the worst effects of these diseases in young populations are preventable. We have the same concerns over NCDs. We are just not doing as much to address them, but we could.

We’ve made a lot of progress in high-income countries, like the United States, in cutting premature rates of mortality from heart disease and many cancers. We’ve made that enormous progress despite having much higher rates of obesity and having much unhealthier lifestyles than exist in poor countries. Many of the tools and strategies responsible for the decline are relatively cheap and could also be implemented in poor countries.

Will addressing NCDs also help to prevent or manage future outbreaks of transmissible diseases like Ebola?

Building health-care systems that are more capable of preventive and chronic care has benefits across the board, including for addressing emerging infectious diseases like Ebola. One thing this Task Force has encouraged is shifting from a very disease-focused model in global health to an outcomes-focused model. We are supply driven, not demand driven.  We focus on the diseases and health conditions we want to address, not necessarily the diseases and health conditions that many of the young, poor people in those countries have.

The report highlights the cost effectiveness of preventing and treating NCDs. Can you give some examples?

The classic example is tobacco control, which is actually revenue generating. Tobacco use causes significantly more annual deaths than HIV, malaria, and tuberculosis combined in low- and middle-income countries.

Addressing NCDs is in many ways the perfect health agenda for austere times: many of the methods are quite cheap and could have big effects. You have the same cost-effective dynamics around cardiovascular disease and hypertension. Aspirin and beta-blockers, for example, are cheap and long off patent, and can be applied using the same platforms and approaches that we’ve used to address other global health issues. There are real opportunities for cost effectiveness in addressing NCDs.

How serious are NCDs in the United States, and what are U.S. strategic interests in combating NCDs abroad?

The U.S. interest in addressing NCDs internationally are the same interests we have in addressing most other global health issues:  our concern about the well-being and fortunes of these countries and the people involved. The vast majority of U.S. global health investment is not because the targeted diseases represent direct threats to U.S. citizens, but rather because those diseases are an enormous health and economic threat to the countries in which they are prevalent and their people. The same is true for NCDs, except that in many countries they involve more people being sick, more people perishing, and greater economic consequences than many of the global health threats we currently invest in.

This Task Force brought together Democrats and Republicans to make these recommendations. Do you think an initiative to boost U.S. involvement in combating NCDs in low- and middle-income countries could find bipartisan support in Washington?

I do. The Task Force is bipartisan, with senior officials from every relevant sector: national security, global health, international trade and development, and foreign policy. The recommendations that emerged from the report were unanimous, which doesn’t always happen in these Task Forces. So everything we were able to put in this support was able to generate bipartisan support, and global health in general has enjoyed bipartisan support. I don’t think addressing cardiovascular diseases or hypertension in young populations, expanding access to cervical cancer screening, or adapting strategies around breast cancer are likely to generate hostility.

Even on tobacco, the United States has dramatically increased cigarette taxes and has put in place strong tobacco policies in virtually every state and many cities, whether they’re governed by Democrats or Republicans. There clearly is political space to do these things domestically and there is no reason that there cannot be that space for international efforts, too.

Growing Up and Moving Out: The Critical Link Between Health and Migration

Migration is seen as the product of desperate circumstances, but increasingly it is the byproduct of success—improved child survival followed by a booming young-adult population.