Russia conducted its first airstrikes on Syria on September 29 after a weeks-long military buildup. Russian President Vladimir Putin spoke about the threat posed by the self-proclaimed Islamic State during his address to the UN General Assembly, but initial reports indicate that the Russian airstrikes did not target Islamic State militants, but rather, a rival rebel coalition. Edward Djerejian, director of Rice University’s Baker Institute, says that a broad-based coalition forming against the Islamic State could lay the groundwork for a political transition in which Syrian President Bashar al-Assad could be in place at the beginning, “but not necessarily at the end.” Djerejian, a former U.S. ambassador to Syria, asks, “Can Syria ever be put back together again? Nobody has an answer for that.” 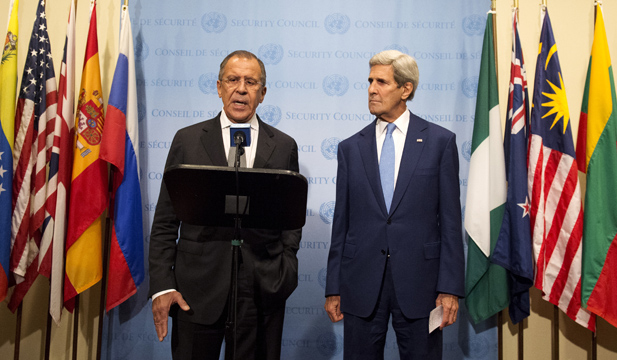 As a longtime observer of the Middle East and a former U.S. ambassador to Syria, how do you think world powers can bring an end to the current horrors in Syria?

There is no easy answer. Assad only controls 20 to 25 percent of the territory—Damascus, Homs, Hama, and the Mediterranean coastline. The other parts of the country are controlled by ISIS, rebel groups, and the Kurds. The challenge has been exacerbated by the [refugee] outflow. There are some seven million internally displaced Syrians out of a [pre-war population] of twenty-four million people. Another four million are refugees: in Lebanon, there are about a million; in Turkey, approximately two million; in Jordan close to about 800,000, and some in Iraq. Those refugees are a potential source of continuing flows to Europe, because they are desperate.

ISIS is one of the fundamental issues. The other one is the future of the Syrian polity: Can Syria ever be put back together again? Nobody has an answer for that.

“Will the conflict go on until all the various parties become so exhausted that they come crawling to the negotiating table? That’s what we saw in the Lebanese civil war.”

Assad’s regime has strong political and military support from Russia, Iran, and Hezbollah. The opposition—the secular groups and some of the Islamist ones, like Jabhat al-Nusra—have been aided by the Gulf states and Turkey. [The United States has] been supporting the secular opposition, but it has proven ineffective. Millions of dollars have been spent and we can only claim about fifty rebel fighters that have been trained by U.S. forces. That’s a real failure in operational terms. Will the conflict go on until all the various parties become so exhausted that they come crawling to the negotiating table? That’s what we saw in the Lebanese civil war.

At the UN General Assembly, Russia and the United States both focused on Syria. Is a compromise on Syria between the two big powers possible?

Early on the Obama administration stated that Assad has to go [because] he is part of the problem, [so he could] not be part of the solution. The administration pointed out that he fired on his own people. In the intervening years, [Assad] has used the air force for really destructive operations against the rebels in the opposition, as well as against a large part of the civilian population.

Putin has a very clear position on Assad and his regime. He thinks that anything to weaken the regime would open the door for ISIS and other radical groups to take over the country. The Russians want to build an anti-ISIS coalition and leave the Assad regime alone. They are seeking U.S. cooperation.

But there is a serious ambiguity in Russia’s tactics and policy. Russia joining an international anti-ISIS coalition is one thing, but if its military actions also target rebel groups, it will be seen primarily as bolstering the weakening Assad regime. This can lead to serious political and even military issues with the United States and the anti-ISIS coalition as a whole.

What is behind Putin’s proposals to use force? His interests in Syria don’t seem to be limited to fighting Islamic State militants.

Russia is upping its military posture in Syria. From Putin’s point of view, the greatest threat is the spread of Islamic radicalism on the southern borders of the Russian Federation. He’s fought two wars in Chechnya, and there’s a radical Islamist movement in Dagestan. He looks at Syria as a potential source of radicalism in his own country. Moscow claims that at least two thousand Russians of various ethnic groups have been recruited by the Islamic State to Iraq and Syria. They can pose an internal terrorist threat within the Russian Federation itself.

The Russians also have a strong interest in maintaining access to the naval facility in [the Syrian coastal city of] Tartus, [Russia’s] only warm-water port in the Mediterranean. It represents the perception of the Russian navy projecting power beyond the Russian Federation’s borders. A change of regime in Damascus could jeopardize Russia’s military and naval presence in Syria.

Russia’s relations with the Ba’athist regime of the Assad family in Damascus date back to the Soviet Union. Given the diminution of Russian influence in the Middle East with the fall of the Soviet Union, Putin sees an interest in reestablishing such influence wherever possible in the region. Syria is a case in point.

But Putin should be wary of what he hopes for. Russian military intervention in Syria could have the unintended consequence of making radical Islamist groups focus on Russia as a prime enemy and target of retaliation. Putin should [also] be reminded of the Soviet experience in Afghanistan, where the mujahedeen drove the Soviet military out of Afghanistan.

Secretary of State John Kerry said that despite harsh words uttered by the Russian and U.S. presidents in their separate UN speeches, if Assad would agree at a future point to step down, then the United States could see some possibility for cooperation with Russia. What do you make of that?

That’s a subtle shift in the American position. When Kofi Annan was the UN mediator [for Syria], he thought there could be no solution unless the major outside players were part of the UN effort, which meant Russia and also Iran. The Obama administration had been allergic to any Iranian involvement and skeptical of Russian involvement, but this week, at the UN, President Obama called for a “managed transition,” [in which] an international coalition with the United States, Russia, Iran, Saudi Arabia, Qatar, Turkey, and Europeans would attack ISIS. There’s an opportunity here, because ISIS poses a major threat to every single regime in the Middle East, including Iran.

“We have to be wary of Putin playing a shrewd tactical game, establishing military assets in Syria to bolster his negotiating power on any future for Syria.”

The trick is how to deal with the Assad question. I see an important shift in the wake of the Iranian nuclear deal. The United States is no longer allergic to an Iranian role. Putin’s discussions with Obama and Kerry’s negotiations with Russian Foreign Minister Sergei Lavrov were [likely] about that. Some formula can be constructed to build on this universal coalition based on enmity toward ISIS in which perhaps Assad will be in place at the beginning of a political transition, but not necessarily at the end.

Are conditions now more conducive to a negotiated settlement to the civil war?

There is room now for diplomacy. [Iranian] President [Hassan] Rouhani said in his speech at the UN that the nuclear deal is a foundation that can be built on. Then he made the point that the threat of terrorist organizations becoming terrorist states is a real problem in the Middle East. Read: ISIS.

There’s room to work with the Iranians, who have a major say in what happens in Syria, and there’s an opportunity to work with the Russians, who have legitimate concerns in terms of Islamic radicalism. But we have to be wary of Putin playing a shrewd tactical game, establishing military assets in Syria to bolster his negotiating power on any future for Syria. The challenge is great, but here is a possibility for a renewed initiative along the lines of what Annan and [his successor as UN Syria envoy] Lakhdar Brahimi, started at the UN, but with strong international backing.