Despite the waves of nationwide protests against Turkish prime minister Recep Tayyip Erdoğan that began last spring, CFR’s Steven A. Cook believes that the leader retains a firm bedrock of support among rural voters that should not be underestimated. Cook says that as a result of the growing opposition, Erdoğan’s "ego is very much engaged," and believes that the embattled politician will fight to remain in power during the next national elections in 2015. However, Cook predicts "a combination of crackdowns and changes to institutional rules, regulations, and decrees that make it harder for people to contest power in Turkey," in the run-up to these elections. As for the Crimean crisis, Cook says that Turkey, which relies on Russian energy imports, is in a "tough spot." Despite professions of support for Crimean Tatars, its response will probably be muted, he says. 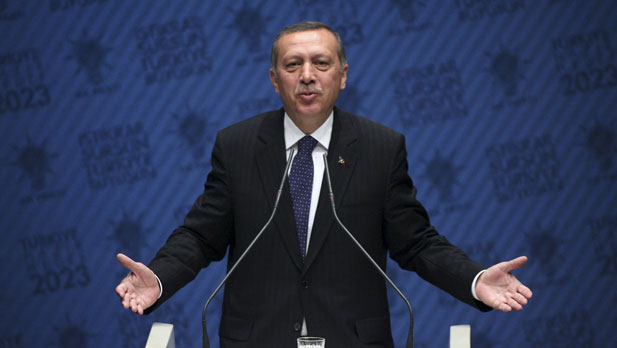 Turkey has always been seen as one of the United States’ closest allies, and Prime Minister Erdoğan has been described by President Obama as one of his most trusted allies. But in in the last year, he’s come under terrific attack inside of Turkey. What’s going on? Is he in real trouble?

More From Our Experts
Steven A. Cook
How Israel and Turkey Benefit From Restoring Relations
Henri J. Barkey
How Erdogan Muscled Turkey to the Center of the World Stage

Well, it’s certainly not a fiction. First let’s take the U.S. part of it. It’s certainly true that Turkey remains a strong ally of the United States. American officials recognize Turkey’s strategic importance; they say the relationship with Turkey is broad and deep, but also complicated. So the way certain things look from Washington sometimes look different in Ankara, but there still is a strong bond between the two countries at a strategic level. Prime Minister Erdoğan has been someone who President Obama has worked with quite well over the course of most of Obama’s two terms.

But, as you pointed out, over the last year or so, things seem to have changed, and Erdoğan has come under a tremendous amount of political pressure. Much of it is his own doing. If we go back to last May and June, there were these Gezi Park protests. On the surface, it was only a protest about the redevelopment of a park, but there were other reasons that were never really resolved. The protests reached a crescendo in mid-June, but have really continued since then. These protests were about police brutality, about the arrogance of power, and about the inability of people to have their voices heard in the political process. One of the things that Erdoğan has done is he’s created an environment where more people can enter into the political arena but fewer and fewer can actually contest politics. That’s also a result of very weak opposition parties. But what people were angry about is that they believe the country has essentially become a one-party state with a strongman, Prime Minister Erdoğan, at the center of it, since the Justice and Development Party came to power in 2002.

Were there other issues?

Yes. The desire of the party to institutionalize its power at the expense of actual democratic practices. The idea that it would write a new constitution that would not [benefit] Turkey, but rather [accommodate] Erdoğan’s aims of becoming president and a sort of crony capitalism. All of this was making people angry. Construction and redevelopment has become a patronage system for the Justice and Development Party. Now, fast forward from the Gezi protests, which, as I said, never really ended, to mid-December of 2013. An immense corruption scandal breaks that ensnares four ministers, their children, big businessmen, all associated with the Justice and Development Party. Since December, almost daily revelations have emerged regarding wrongdoings on the part of Justice and Development party officials, people close to them, and even Erdoğan and members of his own family. That’s what’s happening.

Tell me about Erdoğan’s personal scandal.

More From Our Experts
Steven A. Cook
How Israel and Turkey Benefit From Restoring Relations
Henri J. Barkey
How Erdogan Muscled Turkey to the Center of the World Stage

One of the most explosive things to have surfaced in the last few weeks is a recording of Erdoğan directing his son, Bilal, to hide large sums of money—obviously ill-gotten gains. The prime minister and his son are discussing where to hide this stash of cash, and his son is saying that his own friends don’t want to take more of this money because they fear police raids and so on and so forth. This seemed to be rather damning evidence of the prime minister’s direct involvement in this kind of corruption scandal. Erdoğan said these recordings were fake, or in his words, "an immoral montage." And since the corruption scandal broke, Erdoğan has remained steadfast in his belief that this is a conspiracy against the Justice and Development Party, and Turkey more generally. He first accused U.S. ambassador Frank Ricciardone for directing this. He’s also accused Fethullah Gülen, the leader of the Gülen Movement. There are complicated reasons for him to finger the Gülen Movement, part of which is the suspicion that the Gülenists have infiltrated critical parts of the Turkish bureaucracy, and, as a result, there is what the Justice and Development Party calls a parallel state.

What is the Gülen Movement?

Fethullah Gülen is a Turkish cleric who went into self-imposed exile in the late 1990s. He currently resides on a compound in rural Pennsylvania, where he works as a cleric and a spiritual leader. His followers are called Gülenists and they subscribe to a liberal, Islamist worldview that incorporates theology as well as Western philosophy and science. They control many private schools throughout Turkey, as well as the United States, Central Asia, and parts of the Middle East that propagate this Gülenist worldview.

"[Erdoğan and the Justice and Development Party] are going to use every means possible to ensure electoral victory in the national elections."

The Justice and Development Party and the Gülenists were allies up until not too long ago; they had a confluence of interests in bringing the Turkish military and hardcore Kemalists to heel. But recently a kind of warfare has broken out between the Gülenists and the Justice and Development Party over the direction of the state. One thing that brought this feud to the surface was Erdoğan’s decision to close Gülenist private schools. Now, he didn’t say "Gülenist private schools," he said "private schools." But that was widely seen as broadside against Gülenists. Opponents of the Gülenists see them as this group that is engaged in an effort to create a more Islamist state. There are prominent people, both in Turkey and here in the United States, who see the Gülenists in very dark terms.

How important are the elections at the end of this month?

Mayoralties of big cities are up for grabs at the end of the month. It’s a great opportunity for the opposition parties to make great gains in the municipal elections, and there’s a lot of focus on the candidacy of a guy name Mustafa Sarigul, who is the candidate of the main opposition Republican People’s Party.

There’s this belief that Sarigul could knock off the AKP candidate. (It really doesn’t matter who the Justice and Development candidate is. It’s seen as Erdoğan, because he is a former mayor of Istanbul and he spends a lot of time in Istanbul.) The Justice and Development Party has invested a tremendous amount of time and effort into Istanbul over the past ten years, given their worldview and their reverence for the Ottoman period. I myself do not believe it is a foregone conclusion that Sarigul can unseat the current sitting mayor of Istanbul. Support for Erdoğan has certainly softened as a result of the corruption scandal, but I still think there is a lot for support for him.

There’s going to be a push to change the party bylaws so he can remain prime minister. You know, Erdoğan now faces this challenge from the Gülenists, the Kemalists, and from all across the political spectrum, so his ego is now very much engaged. He doesn’t want to end his political career this way, so no matter how well the AKP mayoral candidates do, the response from Erdoğan and the Justice and Development Party is going to be the same: they are going to use every means possible to ensure electoral victory in the national elections coming up in 2015. And so there’s going to be a combination of crackdowns and changes to institutional rules, regulations, and decrees that make it harder for people to contest power in Turkey.

Turkey’s not far from Crimea. Where does Turkey stand on the Ukraine crisis?

The Turks do import a significant amount of energy resources from the Russians, so they can’t upset Putin too much. They’ve wanted to diversify because they’re so dependent on the Russians and Iranians. The foreign minister, Ahmet Davutoglu, has said that Turkey is watching to make sure that the Tatar population in Crimea does not come under threat, and will respond if it does. I don’t know what they would do, so I think this is a throwaway line. There is a connection between the Tatars and the Turks, but I think the Turks being NATO allies, are going to essentially follow the NATO line on Crimea, insofar as NATO has not responded as robustly as I think some people had expected or would like.

Turks have been interested in boosting trade with Russia, and they already import quite a bit of their energy resources, so they’re in a somewhat of a tough spot like all of the Western allies when it comes to Crimea and Ukraine.