Skip to main content
What Brexit Reveals About Rising Populism

On June 23, the British people defied expectations by voting to leave the European Union. The hotly contested referendum was marked by the rise of a populism based on the desire to regain control of immigration and reclaim national sovereignty from international institutions. The UK’s euroskepticism also parallels the anti-immigration and anti-trade sentiment surging the United States, both of which are driven by "individuals who feel like they have been on the losing end of globalization," says Edward Alden, CFR Senior Fellow and author of the forthcoming book Failure to Adjust: How Americans Fell Behind in Global Economic Competition. And while Europe is already rethinking its policies on migration, Alden says, immigration policy in the United States is locked in stalemate after the Supreme Court rejected the Obama administration’s signature initiative. 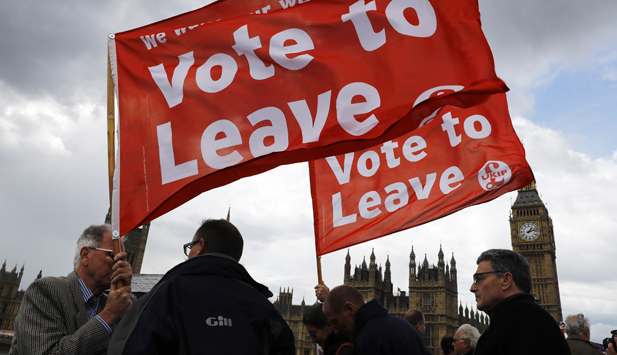 Leave campaigners wave banners near the UK Parliament in London on June 15, 2016. (Photo: Stefan Wermuth/Reuters)
More From Our Experts
Liana Fix
Why European Democracies Are More Resilient Than Expected
Matthias Matthijs
European Lessons for American Economic Renewal
Charles A. Kupchan
Why Putin’s War With Ukraine Is a Miscalculation

The Brexit vote was largely driven by concerns over immigration. Given the UK’s relatively positive economic context—low unemployment and higher growth than its European neighbors—why has immigration come to the forefront now?

As a general rule, there’s not always an immediate cause and effect. People see immigration taking place, they see what they consider the character and culture of the places they live changing, and they react to that, often regardless of the economic situation.

The commonality throughout Western countries was the impact of the Great Recession. In the UK, it coincided with rising immigration, particularly from Eastern Europe. And even though the British economy has actually turned out to be very good at absorbing new immigrants, and is growing faster than most of the rest of Europe, I think people often put two and two together and get five. They look at what they went through in the Great Recession, the fact that it was coincidental with rising levels of immigration, and they think, well, this is bad for our economy. I think that’s the economic piece of it.

There are also cultural aspects that you just don’t get economic explanations for. People are uncomfortable with change and rising numbers of people around them—even if they only see them on television in London—who may speak a different language, may look differently. I don’t think that was all that was going on the Brexit vote by any means, but it was definitely a factor.

More From Our Experts
Liana Fix
Why European Democracies Are More Resilient Than Expected
Matthias Matthijs
European Lessons for American Economic Renewal
Charles A. Kupchan
Why Putin’s War With Ukraine Is a Miscalculation

How is the Leave vote going to reverberate throughout Europe? Will it lead Brussels to reconsider its policies on migration, free movement of people, and the border-free Schengen system?

There is a lot of irony in this, since the UK is outside of Schengen and has a lot more control over non-EU migration. And because it is isolated on an island it hasn’t faced anything like what the rest of Europe has faced in terms of dealing with the flow of refugees from the Middle East and from North Africa. The UK has had trouble controlling free movement from within the European Union, but that’s only a part of what the Brexit campaign was focused on. If you actually look at the ads that were run, they drew very clear links to the refugee crisis that is facing Europe.

From a policy angle, the UK didn’t actually have an obvious problem. The UK had, and continues to have, a reasonably good level of control over immigration flows. No, it can’t control who comes from Eastern Europe, but you can get a pretty good idea of what those numbers are going to be. And it has absolute control over who migrates from the rest of the world.

“The irony is that the country that was least affected by the migration crisis is the one where we’ve seen the most consequential political backlash.”

However, most of Europe does not have control over immigration right now because of the huge refugee flows that we have seen from the Syrian crisis, from Afghanistan, and from North Africa. Europe has had a tremendously difficult time controlling its borders, and you’ve had large flows of people coming in to seek asylum. So the irony is that the country that was least affected by the migration crisis is the one where we’ve seen the most consequential political backlash.

To some extent, Europe is already rethinking migration. They’ve had to in the wake of the Paris and Brussels attacks. There’s been a tightening of the external borders in the east. There’s been some imposition of border controls within the Schengen region. Those will likely continue until the European authorities have greater confidence that they have this flow under a reasonable level of control.

Is there broader support for nationalism than has been previously understood? To what extent are the UK and U.S. contexts comparable?

These are mostly older, white voters, particularly in regions of the country—either the UK or the United States—that have been hit hard by deindustrialization. These individuals feel like they have been on the losing end of globalization, either in terms of trade competition or in terms of competition from new immigrants. This theme will clearly play out through the U.S. election.

Interestingly, there are real parallels between the UK economy and that of the United States. UK labor markets are the most flexible in Europe, it’s easiest to hire and fire people, the social safety net is generally weaker than in a lot of European countries, programs for retraining and to help workers adjust and find new jobs are weaker in the UK than they are in most of continental Europe. In all of those features, the UK is more similar to the United States than it is to the rest of Europe.

U.S. economic performance has steadily improved in recent years, and illegal immigration has been in decline for a number of years. Why is the immigration issue causing such a rift in U.S. politics now?

The best explanation I have seen for this in the United States—and I think it holds in the UK context, too—comes from David Martin, the former deputy general counsel at the Department of Homeland Security.

Martin argues that the issue is one of control. Americans are reasonably tolerant and supportive of immigration, he says, but they need to be persuaded that the government has it under control—that there is an orderly process by which immigration is carried out, that the numbers are something that’s decided on by the government and enforced properly. In the 1990s and first half of the 2000s, with massive levels of illegal migration, primarily from Mexico, the U.S. government really lost control. That set up a narrative that has been very powerful ever since: the notion of borders out of control. The reality is that the U.S. government has done a lot over the last decade to bring the borders more under control. But the public discussion is well behind where the reality is, and that’s a powerful narrative.

If you look at Britain, the final ads of the Leave campaign focused on the people massed at the eastern borders of Europe, the refugees trying to get in. It’s a similar narrative: we have lost control over who’s coming to this country, it’s a loss of sovereignty, and we cannot tolerate that. And that’s where the anti-immigration arguments really bite—much, much more than the purely economic arguments. The perception becomes that perhaps radical measures—a wall, or leaving the European Union—are needed to reassert control.

Last week, the Supreme Court essentially rejected Obama’s plan to use executive action to defer millions of deportations by voting 4-4 to uphold a lower court’s ruling. What does the ruling mean for U.S. immigration policy, and what will be possible under the next president?

For the moment it remains where it’s been for a decade now—a stalemate. With no real prospects for a legislative solution, the 4-4 split in the court indicates that whoever becomes the fifth Supreme Court justice is likely to be determinative on this issue.

So this now becomes an especially consequential election. If Hillary Clinton wins, she’s been on the record saying that she’ll be even more ambitious than President Obama in asserting executive authority in the realm of immigration. And if she succeeds in appointing a new Supreme Court justice, then in all likelihood that gives the new administration the 5-4 majority that it needs to go ahead.

“Most of what’s broken about the immigration system cannot be fixed without legislation.”

But it’s important to remember that, even if a new Clinton administration can go ahead with DAPA [Deferred Action for Parents of Americans and Lawful Permanent Residents, the Obama administration’s plan to spare some five million undocumented immigrants from deportation], it’s only one small part of the immigration system. Most of what’s broken about the system cannot be fixed without legislation.

Anti-immigration sentiment has risen in tandem with trade skepticism. What does Brexit mean for U.S. trade policy with Europe and the future of talks on the Transatlantic Trade and Investment Partnership?

I’m not certain anyone has a good crystal ball. The safest assumption is that, with Europe being consumed with the mechanisms of a Brexit, European leaders won’t have the bandwidth to move forward on TTIP. And TTIP is much more controversial in Europe than it is in the United States. Majorities of the public in Germany and some other countries believe that TTIP will erode Europeans standards on food safety and other issues. It was going to be a big lift for the European leaders even under more normal circumstances, so it’s hard to think that they are going to have the political capacity to move forward.

That said, sometimes in this sort of situation, leaders make an effort to undertake a bold gesture of confidence building. I can imagine leaders trying to muster a decision to push forward on TTIP to show that the United States remains confident about Europe’s future, to send a message to the world that the Brexit will not derail business as usual, and to try to send a message to Britain about what it will be missing out on if it actually leaves the EU. I would be surprised if it succeeds, but I wouldn’t be surprised to see the effort.

The European Union has navigated a thicket of external and internal crises in recent years, including mass migration and Brexit. What are the union’s core institutions, and what roles do they play?

The United Kingdom and the European Union have been unable to reach a deal to define their post-Brexit relationship after nearly a year of talks. A severe disruption to trade between them looks increasingly likely.

In Brief by Andrew Chatzky and Anshu Siripurapu December 14, 2020