The Shanghai Free Trade Zone, a new enterprise district that could spark wider economic reforms in China, is Beijing’s vision of a "full-blown, efficient marketplace," says China expert Daniel Rosen. The eleven-square-mile area, which broke ground on September 29, promises convertibility of China’s currency and freer flow of capital, but many details are still unclear. Still, Rosen says that "for now, the most important element of the nascent zone is that it signals so clearly what Beijing thinks the new endpoint for regulatory conditions should look like."

What does the Shanghai free-trade zone (FTZ) represent to you, and what does it say about the Chinese government’s approach to pushing economic reforms?

It means that central leaders know the right policies for the future of China, but need to demonstrate them in a manageably sized area before applying them nationally. This is the same approach to broad policy reform that successive generations of Chinese leaders have employed since commencing reform in 1978—avoid forcing an all-or-nothing referendum on reform for the nation, and instead create demand for liberalization by permitting it in limited locations. 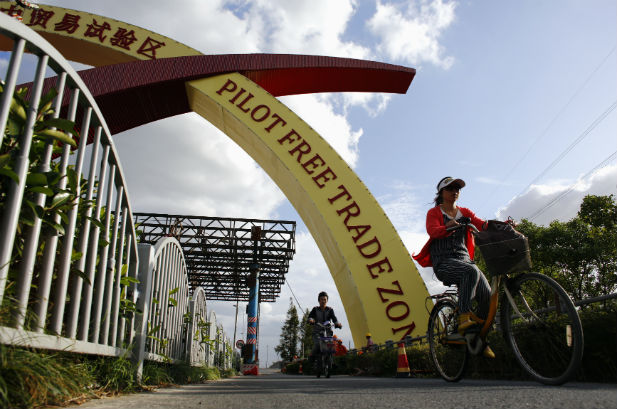 Although many details of what will and won’t be allowed in the zone have yet to be divulged, some of the more notable specifics include renmibi (RMB) convertibility, tax-free trade, and fewer restrictions on foreign direct investment. In your view, what’s the most important element of the FTZ, and why?

For now, the most important element of the nascent zone is that it signals so clearly what Beijing thinks the new end point for regulatory conditions should look like. This is not a vision of a pseudo-market future, but of a full-blown, efficient marketplace. As the changes get underway, the most important practical innovations are likely to be the whole set of reforms that permit service sector firms—especially in financial services—to operate more freely in the same way that the Special Economic Zones of the 1980s enshrined the rules liberalizing manufacturing investment.

Do you have any predictions as to what those other forthcoming provisions of the FTZ may be?

The most important additional clarification will likely be on the judicial and regulatory authorities that come into play when firms engaged in the variety of newly opened sectors run into commercial disputes and need fair and efficient legal recourse. The hard part of running a modern economy is not letting businesses conduct affairs, but adjudicating disagreements that inevitability arise in the course of business. Good business leaders don’t risk assets when they don’t have confidence in the rule of law—unless they can protect their interests in some more corrupt manner, which is precisely what China does not want to see.

There’s been a lot of talk about China’s participation in the Trans-Pacific Partnership (TPP) and a separate bilateral investment treaty with the United States. (A trilateral one with South Korea and Japan is also in the works.) How much do you think the Shanghai FTZ will act as a "pilot" for those talks?

Until recently, most observers insisted that China was decades from readiness to consider the next-generation economic commitments characteristic of TPP, the model U.S. bilateral investment treaty (BIT), or cutting-edge services negotiations like those of the International Trade Administration and the Trade in Services Agreement. The stated terms for the Shanghai FTZ have silenced much of that cynicism. If Beijing can implement the Shanghai initiative then the prospect of its participation in advanced trade and investment agreements is entirely plausible.

Do you have a sense of what kind of reception the FTZ is getting among foreign investors? What are their biggest doubts or worries?

Foreign investors and enterprises barely know what to think yet about the FTZ—after all, it was only launched a few days ago and only conceived and designed in the announced form a matter of months ago. That said, many foreign firms familiar with China have long believed two things: first, that only policy reforms such as those outlined for Shanghai can sustain China’s growth, and second, that Beijing needs to sustain growth more than it wants to avoid ceding power to the private marketplace.

In principle, then, they are not as surprised by this announcement as many political scientists, think tankers, and government officials seem to be. On the other hand, foreign executives know better than anyone the variety of bureaucratic maneuvers China has used to favor its vested interests against foreign competitors and they know that real implementation must be gauged over time, based on concrete outcomes.

This isn’t the first time China has set up a special economic zone; Shenzhen in 1980 provided a precedent. How did that go, and how do you think that project informed this one?

People were skeptical about Shenzhen and its sister zones set up in Zhuhai, Shantou, Xiamin, and Hainan Island in 1980, but those experiments over time have been radically successful in terms of generating economic growth. Within a few years, dozens of other localities were clamoring for and receiving permission to apply the same, more liberal regulatory terms to firms, and within a little more than a decade the number had climbed to the thousands. That experience clearly informs the rollout of the Shanghai FTZ: Beijing knows not to exhaust itself with a full debate of changing the rules across the board for the whole nation, but rather, to use the old playbook and make new reforms a privilege for the most deserving, then expand the new rules little by little until they are predominant.

It seems that the zone is expected to serve as a testing ground for broader reforms that could be rolled out in the future. If the zone succeeds, how do you foresee the government implementing such reforms on a larger scale?

Some of the reforms that are generating excitement in Shanghai—like freer two-way direct investment flows—will likely be liberalized more generally soon, and many basic macroeconomic reforms are on the agenda for the Third Plenum of this Communist Party Congress in November. Other localities are hoping to be next in line for the accelerated policy reform process intended for Shanghai.

This development has been compared to Deng Xiaoping’s reform push in the 1980s. Is that analogy fitting?

The comparison is apt in many ways. In the late 1970s, Deng recognized that without a change of rules and conditions, growth in coastal China could not be accelerated, and he knew that the fundamental reforms subsequently unfurled were the way forward. He also knew that political and commercial vested interests would condemn those rule changes as traitorous to China’s interests, and so he would need to demonstrate their value in a microcosm before broadcasting them nationwide. President Xi Jinping understands this well from his own family’s involvement in the risky effort to promote that change of approach. Today, growth in advanced areas of China such as Shanghai has started to stall severely and optimizing growth requires a new installment of major reforms. The sectors of concern now are services, not the light manufacturing Deng celebrated thirty years ago, but the political economy of policy reform—to use John Williamson’s phrase—is the same now as it was then.