Former oil tycoon Mikhail Khodorkovsky, just pardoned after ten years in prison, told reporters in Berlin this past weekend that he has no immediate plans to return to Russia, but will work to secure the freedom of political prisoners in his native country. Dimitri Simes, president at the Center for the National Interest, does not rule out a political future for Khodorkovsky, even if he is no longer eligible to run for office. "It would be more likely for him to use his financial resources and media skills to become the leader of some kind of movement–a financier of politics as he once was," he says. 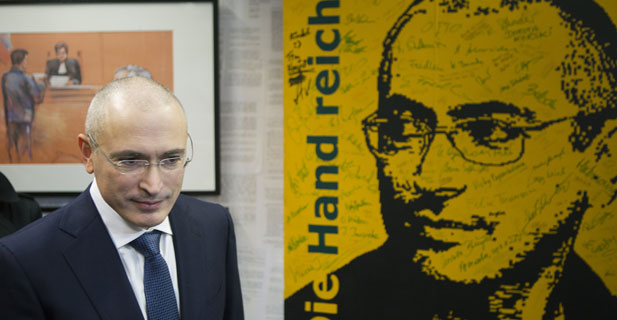 In talking to reporters in Berlin on Sunday, Khodorkovsky said that he would not return to Russia unless he was certain he could leave again. Does this rule out an early return to Russian politics, or could he be involved from a distance?

"[Khodorkovsky] did say he would engage in public activities in support of political prisoners, so that makes it very clear be intends to be a political presence in Russia."

Much depends in the long run on how Khodorkovsky intends to behave. In Berlin, he said he would not engage in politics, by which he meant he would not fight for power. He is unlikely to be appointed to power and he cannot run for any public position because he was sentenced, albeit pardoned. He also said he would not fund the Russian opposition. If he is abroad, he cannot fund the opposition because under Russian law, he cannot fund political parties. But he did say he would engage in public activities in support of political prisoners, so that makes it very clear be intends to be a political presence in Russia.

He will need to find outside resources since his money inside Russia was supposedly seized by the government. If he chooses to go back, he can be like Mikhail Prokhorov, another oligarch and the current owner of the Brooklyn Nets, who ran a symbolic [campaign] against Putin in the last election.

What about the civil case against him?

He is supposed to reimburse government-controlled companies billions of dollars, but that’s the least of his problems. If he decides to go back, [he would face] the so-called third criminal case against him. If Khodorkovsky was planning to become an active part of the opposition, he would have to think very carefully what could be done to him. If he just wanted to be another member of the opposition competing with Alexei Navalny, Prokhorov, and others, he could do it safely. If he decides to take advantage of his hidden financial resources, he would have to rely on property outside Russia, and then, of course, he would have to cross legal lines, so there are legal constraints on what he could do.

What about the release of the two Pussy Riot Rock Band members who were released almost simultaneously with Khodorkovsky?

The timing is related to the start of the Sochi Winter Olympics in February. They were due for release in two months’ time anyway, and Khodorkovsky in eight months. The Riot members were covered by the new amnesty law. (These women not very popular in Russia: they’re considered vulgar, talentless, and self-promoting.) Putin is very experienced in manipulating public opinion, as is his staff. I’m sure that after the poor publicity [that Putin garnered] for the [protests] in the Ukraine, they thought a game-changer on the cheap would help the Russian government.

I thought that Khodorkovsky’s Op-Ed piece that ran in the New York Times at the end of October was quite idealistic. What did it reveal about the man?

He is unlike most of the other Russian oligarchs who managed to build huge wealth in the 1990s but then did not know how to manage it. He clearly did some things that probably were not allowed by Russian law—but almost anyone who became wealthy at that time had to cross some lines. Later, Khodorkovsky established himself as a successful business executive, a man who was building a genuinely impressive global company. In jail, he demonstrated courage, perseverance, and, I would say, a considerable degree of wisdom. If you’re in jail for ten years, and are victimized and persecuted, it’s very easy to act like an extremist revolutionary, but throughout all those years, he demonstrated commendable judgment and moderation.

It will be very interesting to follow what he does.

He has some very important choices to make. I don’t want to be predicting what choices he would make because I don’t know anything about his physical health. He’s fifty years old. On one hand, he’s very young; on the other hand, after you spend ten years in jail, who knows what you’re capable of.

We had many private conversations [prior to his arrest in 2003]. He was a person of great intellect—very shrewd politically—with great insight and impressive analytical skills about Russian politics. He knew very well that this was not the best time for him to challenge Putin and enter Russian politics. At the same time, he was a man of great ambition and had a great vision for his country, and he could not control himself in terms of his desire to enter the political arena. He challenged Putin and went to jail for ten years. He lost his company, Yukos. But he was able to maintain his courage and his dignity.

Do you think he actually wanted to run for high office, or did he just want to make a statement?

He wanted to become the Russian leader. He told me so. He was aware that the Russian political machine would go after him but there was a fire in his belly. He had to enter the political arena.

He had no political base in 2003. Does he have one now after serving a ten-year sentence?

"If Khodorkovsky decides to enter Russian politics, he will have a political base."

On one hand, oligarchs are hugely unpopular in Russia. On the other hand, Russians like victims—particularly, courageous victims. If a courageous victim has imagination, skill, and financial resources, such a person can become a formidable politician. For some Russians—still a minority, but an influential minority—he is a hero. I am talking about western-oriented businessmen, intellectuals, wealthy persons, upper and the middle class. So if Khodorkovsky decides to enter Russian politics, he will have a political base. But he will also have the Russian political and prosecutorial machine able to target him.

When is the next presidential election?

The next presidential election will be held in 2018. It’s quite a way off and they don’t think that Khodorkovsky has whatever ambitions are needed. There is the question of him being convicted of a felony, which, even if he were pardoned, could disqualify him. I think it would be more likely for him to use his financial resources and media skills to become the leader of some kind of movement–a financier