The seizure of power in Yemen by an armed Shia Muslim movement known as the Houthis has thrown the country into disarray and provoked concerns about further Middle East instability. "The Houthis are victims of their own success," says April Longley Alley, a Dubai-based researcher at the International Crisis Group. After rapid advances beyond their northern base, the Houthis now face blowback as the rival al-Qaeda in the Arabian Peninsula (AQAP) has allied with some tribes to repulse their advances. Meanwhile, Saudi Arabia has perceived the ascent of the Iran-aligned Houthis on its southern border as a new front in its contest with Iran for regional dominance. These developments, Alley says, threaten to add a sectarian dimension to a political crisis that has mounted since Yemenis overthrew long-time President Ali Abdullah Saleh during the Arab uprisings in 2011. 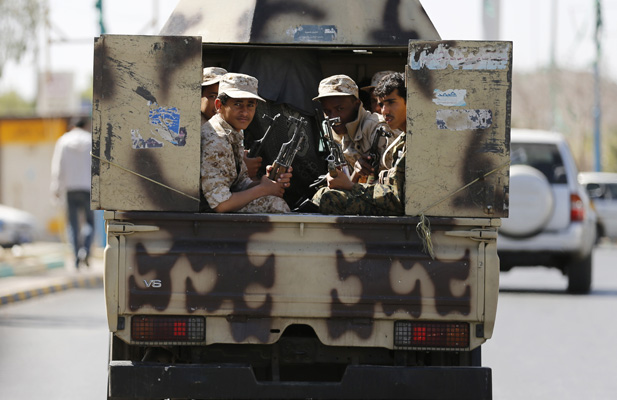 Who are the Houthis?

The Houthis have their roots in a movement that started in northern Yemen in the late 1980s to protect and revive Zaydi religious and cultural traditions. Zaydism is a branch of Shia Islam different from the Twelver Shiism of Iran, Iraq, and Lebanon. The Zaydis make up the majority in the far north but they’re a minority in Yemen. Starting in the 1980s [Sunni Muslim] Salafi religious institutes implanted themselves in these traditionally Zaydi areas with state support. Zaydis felt under attack and also felt the sting of political exclusion and marginalization.

The Houthis became politicized under [their late leader] Hussein Badreddin al-Houthi. He opposed the U.S. invasion of Iraq in 2003 and shifted the movement toward political activism. President Ali Abdullah Saleh was seen as supportive of the United States, so Hussein’s critique was a challenge to Saleh. What started as a police action to arrest Hussein metastasized quickly in the north, and in 2004 the first of six rounds of armed conflict between followers of Hussein and the Yemeni state began.

After the 2011 uprising, the Houthis joined a coalition of Yemeni stakeholders who had a long history of fighting the Saleh regime. The differences between the groups, [which included] some of their traditional adversaries, became evident relatively quickly.

In 2012–2014, the [UN-sponsored] National Dialogue [Conference] brought all [opposition and government] groups together to set the foundation for a new constitution. The Houthis participated in these political negotiations while maintaining a revolutionary stance and expanding their control on the ground.

Ansar Allah is their umbrella organization. They also started to develop political allies from far outside their northern stronghold. They began talking about broader national issues using populist language and framing themselves as a Quranic movement rather than a Zaydi one.

Their political ambitions are still somewhat ambiguous and changing. At a basic level, they are driven by the need to protect themselves from what they view as a state that has marginalized and attacked them in the past. How much they want to control national-level decision-making has expanded exponentially as they have been successful militarily.

Since overrunning the capital in September and triggering the president and cabinet’s resignation in late January, is Ansar Allah now effectively Yemen’s governing party?

“They are a strong, capable military force, particularly in the absence of a cohesive national army. But they are not a group that is experienced politically.”

Until now, the Houthis have been pushing on an open door, calling out the faults in the transition but carrying little governing responsibility. Now it seems they have pushed too far. They’re not in a position to govern Yemen without strong alliances and coalitions.

The government’s resignation put them in a bind. They miscalculated by moving forward with a [February 6] constitutional announcement that alienated the main political parties and galvanized opposition that had been simmering since their takeover of the capital in September.

The Houthis have a point in their critique of the old regime, corruption, and the slow pace of reform and implementation of various transition agreements, including National Dialogue outcomes. They are a strong, capable military force, particularly in the absence of a cohesive national army. But they are not a group that is experienced politically and ready to run a government or manage the economy. They have overstretched.

What are Ansar Allah’s shared interests with Iran? Does it receive material support from Iran?

Ansar Allah is open about its political relations with Iran and [its leaders] admire certain parts of the Iranian system, particularly its resistance to the West and to the United States. They perceive themselves as part of the Iranian orbit. That does not lead to taking orders from Iran necessarily, and it does not mean that the Houthis’ success is a product of Iranian intervention.

The extent of material support is a question mark. It’s not the decisive factor in the Houthis’ ability to gain territory or control. This is primarily a product of the weakness of the state at the center, internal rivalries that the Houthis have been able to exploit, and frustrations inside of Yemen with old-regime elites and the slow pace of change.

The Iranian angle, as the Houthis are well aware, can be a liability in the Yemeni context. The Houthis come from the Zaydi tradition and and there is resistance to moving traditions in line with something that is Twelver. Already, Houthi critics in Yemen are successfully using the link with Iran to undermine their domestic political appeal.

What effect is the Houthi ascent having on AQAP?

The Houthis have had several important victories against AQAP where the government has not. That said, al-Qaeda is using the fact that the Houthis are at the forefront of the fight as an opportunity to stoke sectarian tensions. Yemen does not have a tradition of Sunni-Shia conflict, but AQAP is trying to frame the fight in this context. How successful they will be largely depends on how willing the Houthis will be to form the coalitions necessary to govern the country inclusively and to have a legitimate army and state. Al-Qaeda is experiencing a recruitment boom in some areas, such as part of [central province of] al-Baydha, where the Houthis are perceived as being invaders. When this happens, local tribes may align with al-Qaeda to stop Houthi advances.

Despite Houthi opposition and the closure of the U.S. embassy, Washington is continuing to carry out drone strikes and training some Yemeni military units. What will the U.S. role in Yemen look like going forward?

The Americans don’t have direct influence over the Houthis, who are rhetorically hostile to the Americans even though they share a common enemy. The groups that have the most leverage right now are in the Gulf, particularly the Saudis and, to some extent, Iran. Iran could play a positive role by encouraging the Houthis to avoid the kind of exclusion and overstretch that could cost them the significant political gains they’ve made.

Unfortunately, it seems that Saudi Arabia has lost hope in the political process. It is aggressive in attempts to diplomatically isolate the Houthis and supports groups that will confront them militarily. It looks like Saudi Arabia is on the warpath. There’s no indication that Iran is taking positive actions to defuse the crisis either. This bodes poorly for stability. The regional context is making it much harder for Yemenis to reach a peaceful settlement.

Many Western countries closed their embassies in early February. What were the underlying politics?

The British, French, Americans, EU, Dutch, Germans, Japanese, Turks, the Gulf Cooperation Council states and others have all temporarily closed their embassies, citing security concerns. Security is a concern as long as the political impasse drags on and it will likely worsen absent a political compromise. That said, in general Sana’a was no more dangerous the day that the embassies evacuated than it was two months before. The Houthis have a solid grip on the capital. The decision to evacuate seems to be as much to pressure them to make concessions as it is a product of security conditions.

Most embassies have left the playing field. It prevents capitals from getting on-the-ground analysis from their diplomats. Many of these embassies played a critical role in shuttling among the Yemeni stakeholders, and many of them tried to encourage the Houthis to make compromises and pursue a diplomatic track.

The Houthis are primarily guided by a domestic political calculus. The pressure points are primarily economic, as well as domestic countermobilization. The absence or presence of Western embassies is unlikely to shift their decision making. Instead, it just pulls out bridging agents among the different stakeholders at a time when they are critically needed.

What are the prospects for reviving the UN-backed political transition?

Negotiations are ongoing and UN special envoy Jamal Benomar is still in Sana’a, but the transition has unraveled. He announced a breakthrough agreement on a transitional council to serve as the country’s legislative body, in coordination with the existing parliament. This is positive, but there are many tough issues ahead including agreement on an executive.

“It looks like Saudi Arabia is on the warpath. There’s no indication that Iran is taking positive actions to defuse the crisis either.”

A comprehensive settlement should include agreement on pre-election power sharing at the national and sub-national levels, normalizing the security situation in Sana’a—for example, ending house arrests and Houthi occupations of government buildings—and a compromise on state structure—particularly on the future of the south where separatist sentiment is strong. These issues have plagued the transition since the country’s dialogue ended in January 2014. They are still unresolved. Unfortunately, there’s little indication that the groups negotiating are genuinely committed to a reaching a final settlement at this time.

What role might the Houthis play in the country’s transitional politics? [Editor’s note: President Abdo Rabbu Mansour Hadi, who resigned his office in late January and had been under house arrest in Sana’a, has since escaped to the port city of Aden, retracted his resignation, and called for the government’s ministers to reconvene there.]

The Houthis are victims of their own success. They’re making demands but very few compromises. Other parties don’t believe that the Houthis are serious about letting anyone else participate so they are not motivated to cooperate with them. They are perceived by many Yemenis as bent on imposing their will by force. Opponents may want the Houthis to be bloodied militarily or at least weakened politically by an economic collapse before any lasting political compromise.

It is incorrect to frame what is happening as a sectarian conflict. That said, it is equally misleading to deny a growing sectarian angle. Political and violent opposition to the Houthis is strongest now in Shafai (Sunni) areas of the country, especially [east of Sana’a in the central province of] Marib and increasingly in south Yemen. Yemenis in these areas are concerned about creeping sectarianism. The regional environment is not helping. Al-Qaeda is trying to stoke sectarianism. Saudi Arabia perceives the conflict as part of a regional struggle with Iran. In Iran, the media and some officials are stoking these fears, cheering for the Houthis and taking credit for their success. This regional sectarian overlay will only complicate and prolong violent conflict inside Yemen.

Prospects for Peace in Yemen

Sessions were held on global change and world order, managing the global risk of nuclear weapons, the challenges of rapid urbanization, the future of freedom, and managing the conflict in Yemen.

Report by The Council of Councils June 14, 2019 International Institutions and Global Governance Program

How to Win Friends and Avoid Forever Wars

The Chinese government has used a variety of tactics to silence its critics. Could international attention on tennis player Peng Shuai’s case push Beijing to change?

The Crisis in Sudan: What to Know

Neither the military nor pro-democracy forces are backing down after last month’s coup. The stakes are high not only for Sudan, but also for fragile democracies across Africa.

Fears of a Russian military offensive against Ukraine are back. NATO should bolster support for Kyiv and the United States should signal new efforts to thwart a controversial Russian energy pipeline.