Skip to main content
Will Journalism Suffer After the Paris Attack?

The killing of twelve people in an attack on Charlie Hebdo, a French weekly known for satirizing Islam, has spurred an international discussion on press freedom. Despite the widespread outpouring of support for the newspaper, many worry the attack and others like it will inhibit reporting and commentary on religion. Karin Karlekar, who tracks trends in media freedom for Freedom House, a U.S.-based monitoring group, says journalists have increasingly become the target of broader assaults on democratic values and tolerance. Fear should not factor into editorial judgments, she says, but concern for safety naturally does for many media outlets. 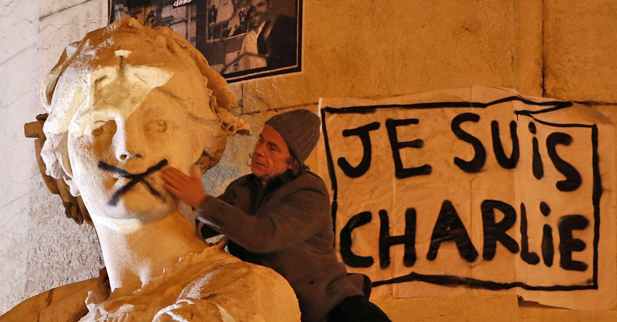 A man touches the spray-painted shut mouth of a statue near a poster reading "I am Charlie" as he takes part in a solidarity march in the streets of Paris, January 11, 2015. (Photo: Charles Platiau/Courtesy Reuters)

Some have criticized what they see as self-censorship at outlets that choose not to republish the controversial cartoons of the Prophet Mohammed. Meanwhile, others have said that republishing would only incite further violence and serve the objectives of terrorists. What are your thoughts?

There is a legitimate argument to be made about standards of decency and sensitivity in the choice to republish. Many establishment news outlets both in the United States and Europe have claimed that due to their highly provocative imagery and possibly offensive nature, the cartoons are simply not in line with their existing editorial standards. But other outlets have insisted that the images are an indispensable element to understanding the whole story. A third factor is the decision to republish solely out of solidarity with Charlie Hebdo.

Ideally, fear of violent reprisal should never factor into the decision to publish any kind of content. However, in a world where many media outlets work globally, editorial decisions may also be made partly on the basis of concern for the safety of staff and unwillingness to endanger them. Ultimately, these decisions need to be made according to the general editorial spirit of individual publications. Outlets should believe that their choice is the most effective and honest way of reporting the story.

How will the attack on Charlie Hebdo affect journalism (and political satire), especially in multicultural, Western societies like France and the United States? Will there be a chilling effect?

That depends on how you characterize a “chilling effect.” Regarding the decision not to republish, we saw something similar following the Danish cartoon controversy in 2005, in which most major news outlets chose not to display the images. But even in the midst of that controversy, some high-profile publications across the U.S. and Europe did choose to republish them, even some in Muslim-majority countries.

The news media did not shy away from the most pertinent issues in that story, regardless of their handling of the specific images, which is why focusing on the issue of who exactly chooses to circulate these images is myopic. There seems to be no shortage of willingness to participate in the conversation about this incident and its implications for broader social and political issues, like freedom of expression—and this willingness has been amplified in the age of social media. In fact, some outlets have published fairly explicit cartoons critiquing the attack, religious extremism, and related issues in recent days.

On a broader level, however, we have heard anecdotally and noted in the past decade of our Freedom of the Press report that such violent attacks on expression have had a subtle chilling effect on the way in which the press in countries such as the Netherlands, Denmark, or elsewhere in Scandinavia chooses to cover issues concerning Islam. I believe that more systematic research is needed into this topic.

Some countries believe that certain topics, like religion, deserve special protection and have enacted blasphemy and other laws restricting political speech. Are such laws generally compatible with democracy and Western values?

Laws that restrict the content of speech, art, journalism, or other forms of expression purely in deference to prevailing political or social sensibilities are never acceptable and are a violation of human rights. Freedom House published an expansive report detailing the adverse effects of blasphemy laws on the lives of people living under them. While blasphemy cases are most common in Muslim-majority countries, they are not unique to Islam; laws are also on the books in countries such as Greece, Ireland, Poland, and Russia.

Any restriction on speech should be exceptional and based on narrow grounds, such as if the speech in question contains direct incitement to violence.

What lessons should be drawn from the attack on Charlie Hebdo?

The Charlie Hebdo attack was one of the worst single attacks on journalists ever recorded, globally, in a country and region where traditionally journalists have not faced significant physical threats or attacks. For example, the last murder of a journalist in Western Europe was in 2001. It should make clear that safety and security for members of the press is a global concern, and not one confined to war zones or fragile states.

Another key takeaway is that freedom of expression has become a “frontline” right, and that journalists are increasingly the target of broader assaults on democratic values, human rights, and tolerance by either extremists or authoritarians.

What can be done to better protect journalists worldwide?

As our recent Freedom of the Press report notes, journalism has come under unprecedented attack recently, both in terms of killings of journalists and also other more insidious forms of censorship, such as legal restrictions and economic pressure. The Committee to Protect Journalists’ data show similar findings. We do need more security and protection for individual reporters whose work—either in terms of subject matter or location—puts them particularly at risk, but also more public education to build understanding of and support for the importance of media freedom within a wider constituency. If these rights are not more vigorously defended, they will continue to be eroded.