Skip to main content
CFR Survey Ranks North Korea and Iran Among Most Likely and Consequential U.S. Conflicts in 2018

More From Our Experts
Scott A. Snyder
North Korea Has Escalated Its Military Provocations. Here’s Why.
Paul B. Stares
Conflicts to Watch in 2022
Carla Anne Robbins
U.S.-Cuba Relations: Three Things to Know 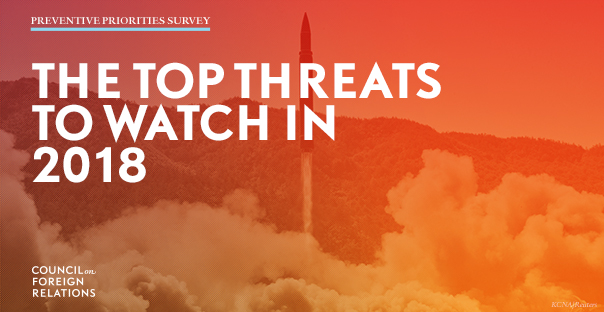 The survey, conducted by CFR's Center for Preventive Action (CPA) asked foreign policy experts to rank thirty ongoing or potential conflicts based on their likelihood of occurring or escalating in the next year and their potential impact on U.S. national interests.

More From Our Experts
Scott A. Snyder
North Korea Has Escalated Its Military Provocations. Here’s Why.
Paul B. Stares
Conflicts to Watch in 2021
Carla Anne Robbins
U.S.-Cuba Relations: Three Things to Know

"With the risk of armed conflict growing in the world, the United States needs to make smart choices about where to focus attention and resources to avert potentially costly military engagements. Our annual Preventive Priorities Survey is designed to help U.S. policymakers do just that," said Paul B. Stares, General John W. Vessey senior fellow for conflict prevention, CPA director, and author of the new book Preventive Engagement: How America Can Avoid War, Stay Strong, and Keep the Peace.

Many of the contingencies identified in previous surveys remain concerns for 2018. Of the thirty identified this year, twenty-two were considered risks last year. Among the eight new contingencies in this year's survey are the risks of intensified clashes between Israel and Hezbollah, increased violence and political instability in the Sahel region of Africa, and escalating tensions or extremist violence in the Balkans.

The 2018 survey downgraded the priority rankings of two contingencies, compared to last year: the intensification of violence between Turkey and various Kurdish armed groups within Turkey and neighboring countries, and the probability of greater violence in Libya.

View the full results and the nine prior surveys at cfr.org/priorities_survey. To learn more or to request an interview, please contact the Global Communications and Media Relations team at [email protected] or 212.434.9888.

The Preventive Priorities Survey was made possible by a generous grant from Carnegie Corporation of New York.