Since late September, Iranian protesters have repeatedly denounced Ayatollah Ali Khamenei and his office of supreme leader. Are there any genuine threats to his position?

The protests that were triggered after Mahsa Amini died while in custody for improper veiling are the most serious Iran has seen in recent years. It is important to stress that prior to Amini’s death, Iran was rocked by various demonstrations throughout the summer, including ones sparked by water shortages and teachers’ protests. The tragic death of Amini unified the many strands of dissent. Economic grievances, lack of political opportunity, and massive corruption have cascaded into a protest movement that is convulsing the country and transcending class divisions.

It is difficult to estimate the degree of threat to Khamenei’s position, but in recent years, many who have taken to the streets have called for his removal from power and the overthrow of the Islamic Republic. Given that the regime is incapable of delivering on its economic promises, offering meaningful avenues for political expression, and providing a measure of cultural autonomy, it appears to have lost significant public support.

What powers does the supreme leader have? Are there any significant checks on the position?

While Iran’s president handles foreign policy and the country’s day-to-day affairs, the supreme leader is empowered to command the armed forces, dismiss any elected official, countermand parliamentary legislation, and declare war and peace. The Assembly of Experts, which consists of eighty-eight clerics, is ostensibly responsible for overseeing that office. The members of the assembly are elected, but that process is overseen by officials who make sure conservative clerics constitute the majority. Candidates for the assembly have to be approved by the Guardian Council, a conservative body appointed by parliament, and the supreme leader also exercises some influence over the election process. 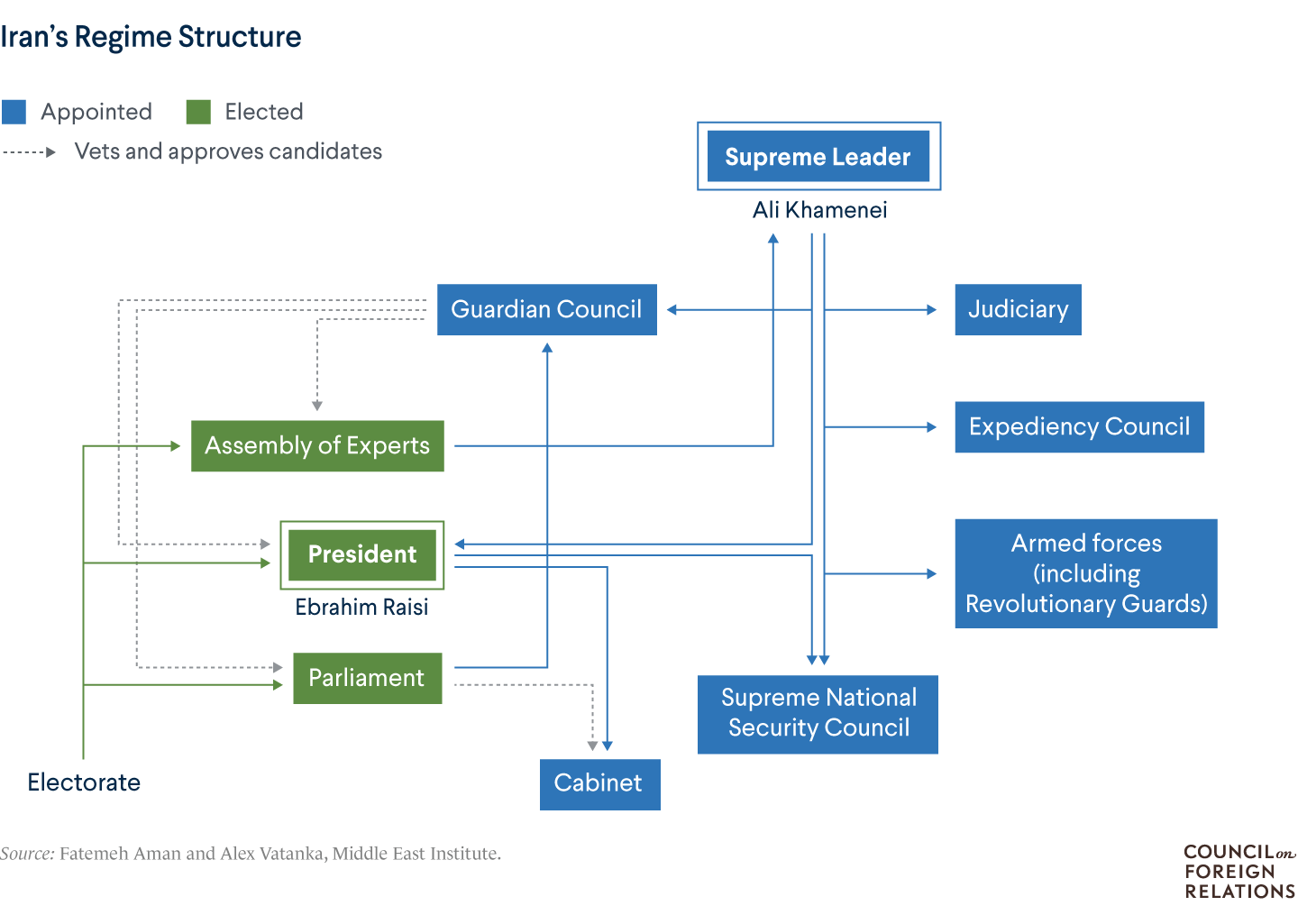 How did the position of supreme leader originate?

The position was the brainchild of the leader of the 1979 revolution, Ayatollah Ruhollah Khomeini. While in exile in Iraq in the 1970s, he articulated the theory of velayat-e faqih, or “guardianship of the jurist,” whereby a religious leader would oversee all national affairs. This was an unusual idea, as Shiite Islamic law did not endorse the notion of direct clerical rule. However, Khomeini insisted that an Islamic government needed clerical supervision to ensure that it conformed to religious injunctions.

What has distinguished Khamenei’s rule?

Khamenei has made it his mission to preserve the revolutionary identity of the state, particularly that it remains devoted to Islamic principles and opposed to the West. This has been a difficult task given the widespread public disillusionment with Islamist rule. As he contemplates his succession, eighty-three-year-old Khamenei has embarked on a two-track policy to ensure that the republic he leaves behind maintains fidelity with his ideals, which are centered on the clergy’s control of important state institutions. He has undertaken a massive purge of the political elite. All but the most reliable and obedient members of the political class have been excised from power. In the 2021 presidential election cycle, even Ali Larijani, a former speaker of parliament and conservative stalwart, was disqualified.

Khamenei’s second mission has been to refashion the economy and make it more resistant to international sanctions. This is what he has called the “economy of resistance.” Along this line, Iran seeks to rely on its internal markets and trade with supportive states such as China and Russia, as well as neighbors such as Afghanistan and Iraq. Iran is also trying to lessen its dependence on oil and reduce the onerous subsidies that drain its treasury. This task remains both incomplete and controversial. Iran still heavily relies on oil revenue and global financial markets. And in the meantime, the reduction of subsidies on goods such as food and gasoline has led to protests.

Another venue where Khamenei seeks to leave his mark is the nuclear issue. He has long been an advocate of nuclear science and views the development of atomic power infrastructure as an important indication of modernity. Naturally, an advanced nuclear program also offers Iran the option to develop nuclear weapons, though Khamenei and other leaders have repeatedly said they have no plans to do so. He also permitted Iran’s previous president, Hassan Rouhani, to negotiate the deal that froze the nuclear program in exchange for a lifting of Western sanctions, but Khamenei has been a sharp critic of what he says are U.S. abuses of the deal.

What does the succession process look like, and what qualifications does a successor need?

In its original conception, the office of the supreme leader was to be held by a cleric known for his theological erudition. In 1989, when Khamenei was elevated to the post after serving as president, he lacked the requisite religious credentials, and the office became a more political one. In a future succession process, the ability to manage the state and exercise sound political judgment, meaning devotion to the revolution, will likely weigh much more than religious credentials. Thus, the successor will certainly be a cleric, but likely one with a more accomplished background in politics than in religious learning and writing.

The Assembly of Experts is supposed to vet candidates and eventually choose the successor. However, there is likely to be much backroom maneuvering in making the final decision. Likely participants in the behind-the-scenes selection process include the leadership of the Islamic Revolutionary Guards Corps, who wield both military and economic clout, and a number of conservative clerics, such as the current head of the assembly, Ahmad Khatami. In essence, the Assembly of Experts will be the venue where the final decision is affirmed as opposed to a genuine deliberative body.

Who are the most likely candidates to take over from Khamenei? Would any of them be likely to deviate significantly from his policies?

This is impossible to predict given how fluid the political situation is today. For years, there was an assumption that now President Ebrahim Raisi was being groomed for the position. He had been given a series of rapid promotions, including being elevated to the presidency in the 2021 election, during which authorities disqualified his most formidable rivals. He has close ties to the paramilitary forces via his background in the judiciary and would be acceptable to the Revolutionary Guards and other security services. He lacks charisma, vision, and theological learning, but the post no longer requires such a pedigree.

It has been rumored in recent years that Khamenei’s son, Mojtaba, a cleric said to be influential in security circles, could be selected for the top spot. It should be noted that the Islamic Republic tends to avoid dynastic successions. Throughout its tenure, the regime has issued scathing criticism of monarchies and inherited power. Should the regime move in that direction, that would be another indication of how far it has strayed from the initial egalitarian promise of the revolution.