Hong Kong is a special administrative region of the People’s Republic of China that, unlike the mainland’s provinces, has certain political and economic freedoms. The former British colony is a global financial capital that has historically thrived off its proximity to China.

But in recent years, many in Hong Kong have become concerned with intensifying economic inequality and with what they see as efforts by Beijing to encroach on the city’s political system. As China’s economic and military might continue to grow, some fear that Hong Kong’s significant autonomy could erode.

What is Hong Kong’s political status?

Hong Kong is largely free to manage its own affairs based on “one country, two systems,” a national unification policy developed by Deng Xiaoping in the 1980s. The concept was intended to help reintegrate Taiwan, Hong Kong, and Macau with sovereign China while preserving their unique political and economic systems. After more than a century and a half of colonial rule, the British government returned Hong Kong in 1997. (Qing Dynasty leaders ceded Hong Kong Island to the British Crown in 1842 after China’s defeat in the First Opium War.) Portugal returned Macau in 1999, and Taiwan remains independent.

The Sino-British Joint Declaration of 1984 dictated the terms under which Hong Kong was returned to China. The declaration and Hong Kong’s Basic Law, the city’s constitutional document, enshrine the city’s “capitalist system and way of life” and grant it “a high degree of autonomy,” including executive, legislative, and independent judicial powers for fifty years (until 2047). Chinese Communist Party officials do not preside over Hong Kong as they do over mainland provinces and municipalities, but Beijing still exerts considerable influence through loyalists who dominate the region’s political sphere. Beijing also maintains the authority to interpret Hong Kong’s Basic Law, a power that it has only used a handful of times since the handover. 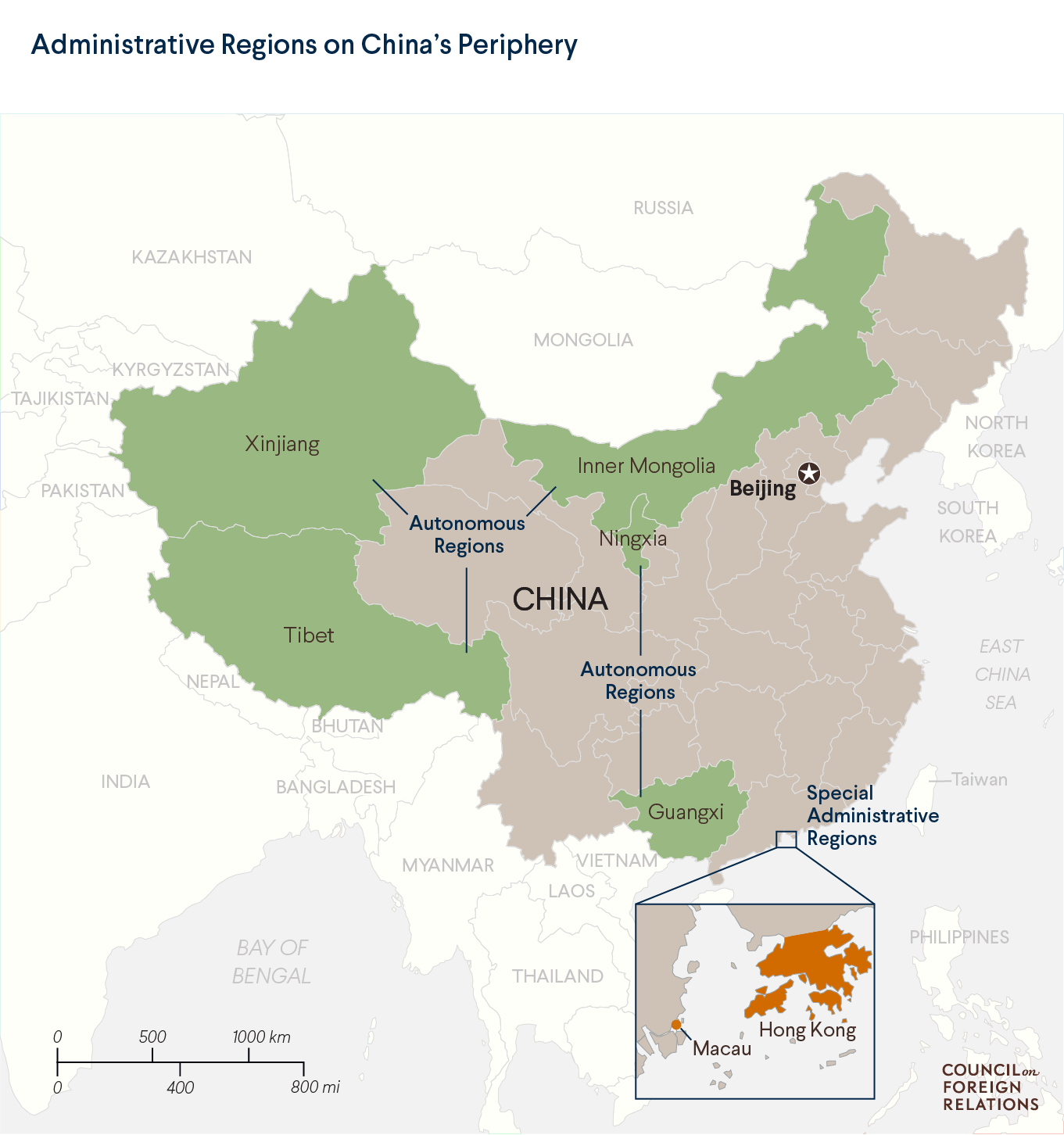 Under the law, Hong Kongers are also guaranteed freedoms of the press, expression, assembly, and religion, but in practice Beijing has grown less tolerant of criticism. Hong Kong is allowed to forge external relations in certain areas—including trade, communications, tourism, and culture—but Beijing maintains control over the region’s diplomacy and defense.

What is Hong Kong’s economic connection to the mainland?

A metropolis of more than seven million people, Hong Kong is a global financial and shipping center that has prospered from its proximity to the world’s second-largest economy. It ranks second in the world in trade as a percentage of gross domestic product (GDP), with services accounting for more than 90 percent of its economy. Relatively low taxes, a highly developed financial system, light regulation, and other capitalist features make Hong Kong one of the world’s most attractive markets and set it apart from mainland financial hubs such as Shanghai and Shenzhen. Hong Kong continues to take top spots in economic competitiveness reports, placing fourth in the World Bank’s annual Doing Business rankings and first in the world on the Heritage Foundation’s 2019 Index of Economic Freedom. Most of the world’s major banks and multinational firms maintain regional headquarters in the city.

But Hong Kong’s economic power has diminished significantly relative to the mainland—its GDP fell from 16 percent of China’s after the handover in 1997 to less than 3 percent in 2017. Commercial ties between the two neighbors remain tight. Hong Kong is China’s fourth-largest trading partner (after the United States, Japan, and South Korea), accounting for about 7 percent of China’s total trade in 2018. The city is also China’s largest source of foreign direct investment (FDI) and a place where Chinese firms raise vast amounts of offshore capital.

What are the political tensions between Hong Kong and Beijing?

As a one-party state, China is reluctant to allow Hong Kong to develop into a full-fledged democracy with free and fair elections. Experts say that ambiguity in the Basic Law heightens this fundamental tension. The document states that the “ultimate aim” is to have Hong Kong’s leader elected by a popular vote, but it does not give a deadline for these reforms to occur.

Since the handover, an election committee composed of representatives from Hong Kong’s main professional sectors [PDF] has selected chief executives. Today, these 1,200 members come from a range of societal groupings: the industrial, commercial, and financial sectors; other professional sectors, including higher education and engineering; labor, social service, and religious groups; and Hong Kong political bodies. All changes to political processes have to be approved by the Hong Kong government and the National People’s Congress, the PRC’s legislative body.

Some analysts say China’s repeated decision to put off further political reforms, including a national vote for chief executive, indicate that Beijing will drag its feet indefinitely. In the most recent election, only candidates vetted by a nominating committee chosen by Beijing were allowed to run. Carrie Lam, viewed as an establishment candidate, won the 2017 race, becoming Hong Kong’s first female chief executive.

Beijing increased its efforts to rein in political dissent following massive protests in 2014, known as the Umbrella Movement, and the electoral victories of pro-democracy factions in 2016. Later that year, a controversy erupted when several new legislators modified their oaths of office while being sworn in, prompting Beijing to intervene in local court proceedings and pass a new interpretation of Hong Kong’s Basic Law that outlined consequences for legislators who deviated from the oath. Ultimately, six legislators were disqualified.

In recent years, mainland officials have also used Hong Kong media to push Beijing’s narrative and clamp down on critical voices. Sino United Publishing, a company reportedly owned by the Chinese government, controls as much as 70 percent of the local market. Mysterious disappearances of a handful of Hong Kong booksellers, media executives, and a Chinese billionaire have heightened concerns about Beijing’s creeping control over Hong Kong.

Tensions with Beijing came to the fore again in the summer of 2019, when hundreds of thousands of people protested against a legislative proposal that would have allowed extraditions to mainland China. The protests have continued for months, with demonstrators storming the Legislative Council building in July and occupying Hong Kong International Airport the following month, and they have morphed into a battle over Beijing’s deepening control of the city. Reports of police brutality, including excessive use of tear gas and rubber bullets, have exacerbated tensions. Lam withdrew the Beijing-endorsed bill in September, but protesters are demanding electoral reforms and an independent investigation into police violence.

So far, Beijing has largely left the Hong Kong government to respond to the crisis, but Chinese state-run media have sought to discredit the protesters, calling their actions “terrorism,” and to spread disinformation. Experts are concerned that Beijing could eventually use military force.

What do Hong Kongers want?

The majority of Hong Kongers support the maintenance of “one country, two systems.” Public opinion polling has found that a minority—just 11 percent of people in 2017—supported or strongly supported the idea of an independent Hong Kong [PDF] after 2047.

However, their confidence in the arrangement may be waning. Other public opinion surveys indicate that Hong Kong residents are increasingly dissatisfied with the Hong Kong government and the state of politics. Amid the extradition bill protests, dissatisfaction with the Hong Kong government skyrocketed, with 72 percent of respondents expressing negative opinions in June 2019, up from around half earlier in the year. A widening generational gap and mounting economic inequality—Hong Kong has one of the world’s highest levels of income inequality—have deepened political divisions. Younger generations feel they are not reaping the benefits of their city’s wealth and face stiff competition from an influx of mainlanders. The influence of mainland money also widens the divide between socioeconomic classes.

The ethnic identity of the city has also evolved since its handover to China. Though many still describe themselves as having a mixed identity, more and more people see themselves as Hong Kongers or Hong Kongers in China, while the number of those who identify as Chinese or Chinese in Hong Kong has dropped. 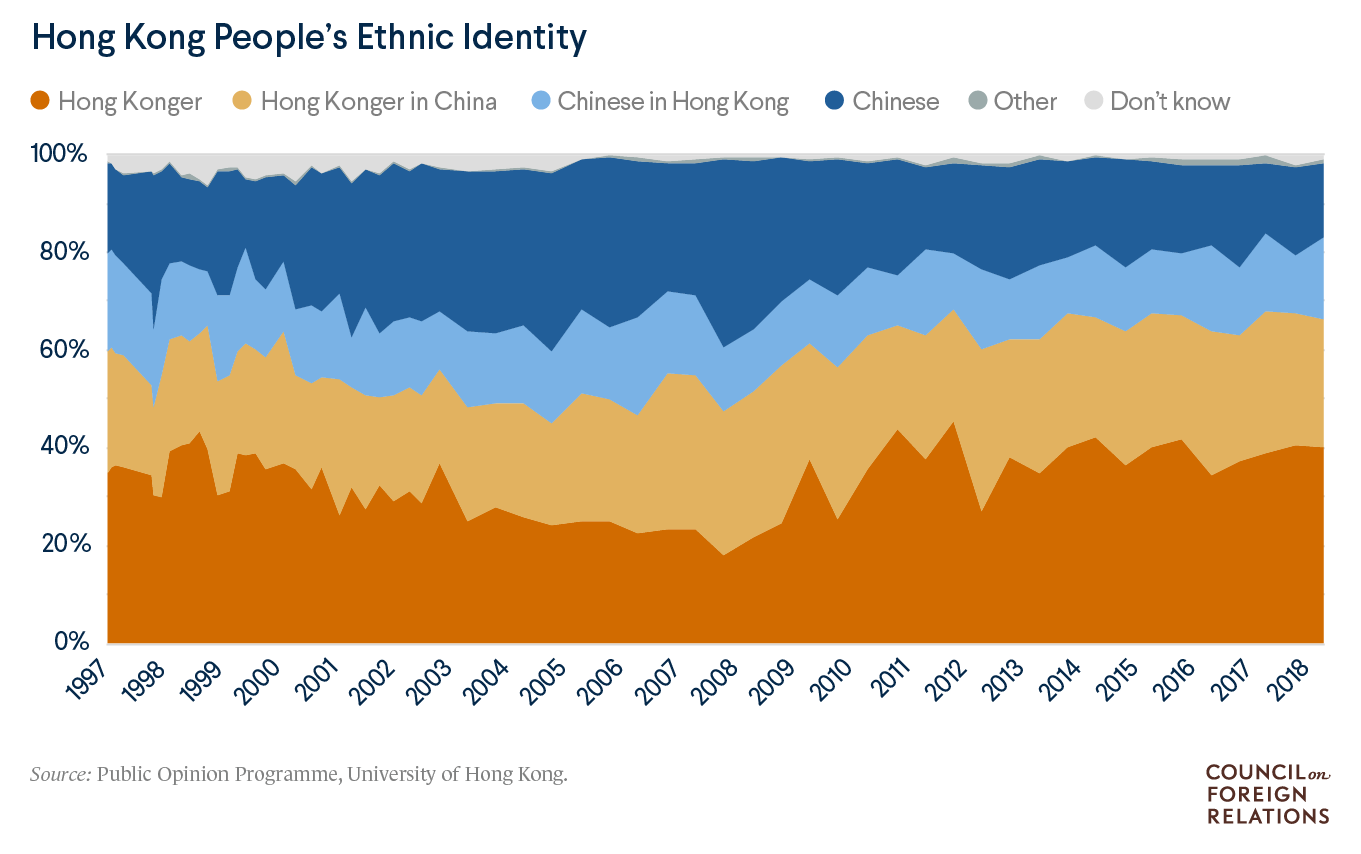 The political scene has traditionally been split between two factions: pan-democrats, who call for incremental democratic reforms, and pro-establishment groups, who are by and large pro-business supporters of Beijing. The pro-establishment forces have typically been more dominant in Hong Kong politics. Pan-democrats recognize that Hong Kong cannot force Beijing into reforms that could jeopardize its central authority and that reforms are more likely to succeed when they are mutually beneficial.

At the same time, there is a rising movement of student protesters demanding a more democratic system. After the 2014 protests, young activists formed new political groups and parties embracing a more overtly local, Hong Kong identity. These parties include more radical, anti-Beijing parties, such as Youngspiration and Hong Kong Indigenous, and Demosisto, a party advocating for greater autonomy and self-determination.

What are Beijing’s plans for Hong Kong?

It’s unclear what China’s plans are for Hong Kong after 2047. For now, Beijing wants to maintain its territorial integrity and therefore views all protests and pro-democracy political voices as potential challenges to its one-party rule. It perceives Hong Kong’s calls for democracy as particularly threatening because of the city’s international prominence and the dangerous precedent that any compromise on political reform could set for China’s other regions, including Tibet, Xinjiang, Inner Mongolia, Macau, and Taiwan.

In recent years, Beijing has sharpened its rhetoric. On a trip to Hong Kong in 2017 to commemorate the twentieth anniversary of the British handover, President Xi Jinping issued a stark warning that “any attempt to endanger China’s sovereignty and security” or to challenge Beijing’s power would cross a red line.

In 2017, Beijing announced the Greater Bay Area project, an ambitious plan to integrate Hong Kong and cities in neighboring Guangdong Province into a more cohesive region, one that could rival the San Francisco Bay or Tokyo Bay areas and drive future innovation and development. Echoing the connectivity narrative of China’s Belt and Road Initiative, the Greater Bay would constitute a population of more than seventy million people and a $1.5 trillion economy.

Over the past few years, China has moved to connect Hong Kong more to the mainland with the opening of a high-speed rail station and a thirty-six-kilometer (twenty-two-mile) bridge linking Hong Kong and Macau to the mainland city of Zhuhai. Some critics say the efforts may diminish Hong Kong’s special standing. “‘Connectivity’ might be one of the keywords of China’s discourse, but all the infrastructure built over the past few years in neighboring cities has only helped to dilute Hong Kong further into a vast economic zone where it is no longer the center,” writes Philippe le Corre of the Carnegie Endowment for International Peace.

Lindsay Maizland contributed to this article.

* A previous version of the above map mislabeled Hong Kong and Macau as autonomous regions and Guangxi, Inner Mongolia, Ningxia, Tibet, and Xinjiang as special administrative regions.

The Australian Broadcasting Corporation tells the story of the massive protests in 2019.

In Foreign Affairs, Andrew J. Nathan breaks down Beijing’s response to the 2019 protests.

The Chinese government issued a white paper on the application of the “one country, two systems” policy in Hong Kong in June 2014.

Why Does the WHO Exclude Taiwan?

The world could learn from Taiwan’s success in responding to the coronavirus pandemic, yet it doesn’t have a seat at the World Health Organization.

Behind China's Influence in Africa

From trade to film, China's influence in Africa is nearly everywhere. Why—and at what cost?

There is a case that viruses (bird flu, swine fever, and now the coronavirus) have had almost as big an impact on Chinese-American agricultural trade as the trade war. (And more than most want to know on trade in crustaceans)

Can the World Alleviate Idlib’s Humanitarian Disaster Amid a Pandemic?

At the outset of 2020, the conflict in Idlib province was emerging as the worst humanitarian crisis of Syria’s nine-year war. Now, the coronavirus pandemic has made relief efforts even more difficult.

After the Pandemic: Can the United States Finally Retool for the Twenty-First Century?