Disclosures of controversial U.S. surveillance practices, including the monitoring of some foreign leaders, have reignited an international debate over internet governance. Some countries hope to leverage the scandal to diminish the influence Washington has over some internet infrastructure—principally processes managed by the U.S.-based nonprofit, ICANN, that coordinates the unique identifiers (Internet Protocol addresses and domain names) that people and devices use to connect on the internet. (ICANN is an acronym for the Internet Corporation for Assigned Names and Numbers.) But a broader discussion of internet governance touches on a range of public policy issues, including freedom of expression, trade, privacy, cybersecurity, and sovereignty.

What is internet governance?

The term internet governance has evolved over time, and various groups have attempted to develop working definitions. As the internet first opened to commerce and the wider public in the mid-1990s, the term referred to a limited set of policy issues associated with the global synchronization and management of domain names (e.g., samplesite.com) and IP addresses (e.g., 7.42.21.42).

But as the internet became a unified medium for all types of information, the definition broadened considerably. In 2005, the UN-sponsored World Summit on the Information Society defined internet governance as "the development and application by governments, the private sector and civil society, in their respective roles, of shared principles, norms, rules, decision-making procedures, and programs that shape the evolution and use of the internet."

As contentious public policy issues have emerged, the concept of internet governance has conflated management of the technical resources necessary for its stability and continued expansion with discussion of behaviors emerging from the use of the internet at what is known as the content layer.

How is the internet governed?

Many information policy experts emphasize that "internet governance" is not the product of an institutional hierarchy, but rather, it emerges from the decentralized, bottom-up coordination of tens of thousands of mostly private-sector entities across the globe. Often referred to as internet "stakeholders," these include network and server operators, domain name registrars (e.g., GoDaddy) and registries (e.g., Verisign), IP address and standards organizations, internet service providers (e.g., Verizon), and individual users. Civil society organizations and governments participate alongside these stakeholders in contributing to the development of technical policies.

What role do national governments play?

States control internet-related policies within their own borders, such as passing laws prohibiting online gambling, protecting intellectual property, or blocking/filtering access to certain content. Some authoritarian governments censor political and social content much as they do in traditional media. A 2013 report from Freedom House found that China, Cuba, and Iran were the most repressive countries in terms of internet freedom for the second consecutive year. The Washington, DC-based research and advocacy nonprofit found that more than half of the countries assessed experienced a decline in Internet freedom, including the United States. 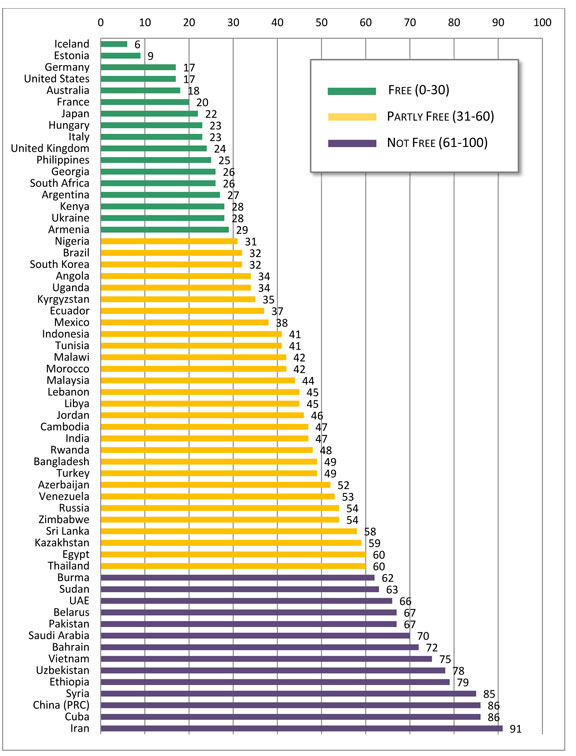 Roughly half the world’s internet users experience some form of censor­ship online, according to the OpenNet Initiative, an academic partnership that analyzes internet filtering and surveillance practices. Mechanisms of online censorship include the technical blocking of websites, search result removal, legal take-downs, and induced self-censorship. For instance, some human rights groups say that China’s detention of some high-profile bloggers creates an atmosphere of dread that discourages wider internet activism.

Furthermore, experts note that online censorship in some countries would not be possible without the compliance of the business community. "In order to maintain their business licenses and operate in China, domestic and foreign internet companies are required to abide by a rough set of guidelines issued by central and local government agencies—and thus encouraged to practice self-censorship," says a 2012 report from the nonpartisan Congressional Research Service.

Established in 1998 under contract to the U.S. Department of Commerce, the Internet Corporation for Assigned Names and Numbers is a private nonprofit headquartered in California that, among other things, manages the global Domain Name System. Often referred to as the internet’s "phone book," the DNS is a worldwide network of databases mapping domain names (samplesite.com) to IP addresses (7.42.21.42) so that users can send and receive information from any of the billions of web-connected devices. The DNS is essential for the proper function of a single, universal, and scalable internet, experts say.

ICANN is guided by an international board of directors, which is elected by members of the ICANN community and holds final decision-making authority. The board is advised by a committee composed of representatives from more than 110 national governments. But many analysts note that Washington has more influence over the DNS than other countries by virtue of its legacy relationship with ICANN. The U.S. government originally managed the technical underpinnings of the DNS because the Department of Defense developed the network technology (ARPANET) from which the internet evolved.

Why is ICANN a focal point?

Some information policy experts downplay the significance of ICANN amid the broad spectrum of internet-related policy issues, but others acknowledge its distinctive geopolitical import.

ICANN represented "a revolutionary departure from traditional approaches to global governance," wrote communication scholar Milton Mueller in Networks and States in 2010. "It significantly reduced the power of national governments and existing intergovernmental organizations over communication and information policy." He lists four reasons why ICANN spawned such controversy:

What is the Internet Governance Forum?

The Internet Governance Forum is an international group of governments and nongovernmental entities created in 2006 at the World Summit on the Information Society. Internet historians say the IGF, which meets annually to discuss internet-related policies, was in large part the UN’s response to ICANN; many foreign governments felt it was inappropriate for Washington to have unilateral oversight over the most prominent multistakeholder gathering of internet policymaking. Furthermore, IGF, which issues no binding outcomes of its proceedings, is a venue where contentious public policy matters at the content layer of the internet can be freely discussed.

The establishment of the IGF was noteworthy for its embrace of a multistakeholder model (a model also utilized by ICANN), where states—including many authoritarian governments—agreed to participate in policy discussions on an equal footing with private sector and civil society groups.

"No other governance model can deter the fragmentation of the internet into jealously guarded, national telecom-run fortresses, where access to social networks such as Youtube—even the internet itself—can be denied instantaneously," writes CFR’s Stewart Patrick.

Did the creation of the IGF resolve the debate?

No. Some countries remain unsatisfied with ICANN’s management of the DNS as well as the multistakeholder model of internet governance. In recent years, some countries have pushed to expand the influence of national governments at the expense of business and civil society groups.

At the UN-sponsored World Conference on International Telecommunications in Dubai (December 2012), Russia, China, Saudi Arabia, Algeria, and Sudan endorsed a proposal stating, "Member States shall have the sovereign right to establish and implement public policy, including international policy, on matters of internet governance." The proposal also called for member states to take over much of ICANN’s remit, including internet numbering, naming, and addressing.

The U.S. delegation rejected the plan, asserting that "the United States continues to believe that internet policy must be multistakeholder-driven. Internet policy should not be determined by member states, but by citizens, communities, and broader society."

In early 2014, the U.S. government announced plans to relinquish its historic stewardship over the Internet Assigned Numbers Authority (IANA), which is operated by ICANN, to the global multistakeholder internet community when its contract with ICANN expires in September 2015. Once again, the Department of Commerce stipulated that it would not transition IANA stewardship over to a government-led or intergovernmental organization.

U.S. officials stress that they had always planned to relinquish stewardship of the IANA function to the global community. But many commentators view the proposed transition as a strategic move by the Obama administration to placate international critics after Edward Snowden’s exposure of sweeping U.S. surveillance practices (though experts note that the activities of ICANN and the National Security Agency are fundamentally unrelated). But more importantly, many experts believe the symbolic handover may set the stage for broader changes in other areas of internet governance, such as intellectual property rights and cybersecurity.

This 2013 report from the Congressional Research Service examines Internet governance and the Domain Name System.

This 2013 report from Freedom House highlights how Internet freedom has deteriorated worldwide in recent years.

The Internet Society provides a brief history of the global communications network.

For media inquiries on this topic, please reach out to [email protected].
Related
Facebook, Twitter, and the Challenge From Washington
by Karen Kornbluh
The Internet is Fragmented. What Should the United States Do Now?
by Adam Segal
Twitter Ban Shows Limits of State Power in Nigeria
by Ebenezer Obadare

Germany’s China Policy: Has It Learned From Its Dependency on Russia?

The German economy remains heavily dependent on China, its largest trading partner, despite mounting geopolitical tensions between the West and Beijing.

North Korea Has Escalated Its Military Provocations. Here’s Why.

North Korea seeks to exploit major-power rivalries and weaken U.S.-South Korea ties with its ramped-up missile testing. Already, it has ratcheted up nuclear tensions on the Korean Peninsula to their highest level in years.

In Brief by Scott A. Snyder November 4, 2022 Asia Program