Skip to main content
China Is Not Helping Its Manufacturers 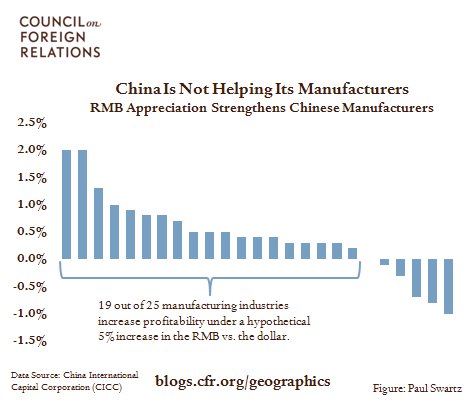 Chinese trade officials are reluctant to change China’s dollar-peg currency policy, citing concerns over the fate of exporters. Vice Commerce Minister Zhong Shan has argued that exporters will fail if the currency appreciates because profit margins are often less than 2%. However, when China International Capital Corporation (CICC) performed an analysis evaluating the effect of a hypothetical 5% increase in the value of the RMB against the dollar, by comparing decreases in revenue with the cost savings from cheaper imports, they found that most manufacturing sectors’ profitability actually increased. But as Chen Deming, the Minister of Commerce, has said, ‘we also have our own employment and stability to think about.’ Decreases in revenue suggest reduced employment, which Chinese officials appear unwilling to accept. Maintaining the peg can also, at least temporarily, prop up facilities that would not be profitable at a higher exchange rate. Supporting ventures that are unprofitable at equilibrium exchange rates will not, however, foster economic growth over the long run.