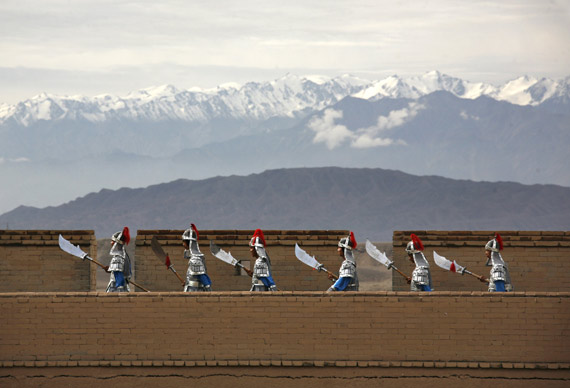 Want to know how much China’s money is changing the balance of forces on its periphery?  Back in January I blogged on “China’s Big Play in Central Asia.”  And by “big play” I meant simply that China’s new assertiveness is changing Central Asia’s energy, economic, and strategic landscape in dramatic ways.

So check out this fascinating interview in The Telegraph with Grigori Marchenko, an architect of Kazakhstan’s economic success in the 1990s and now head of the country’s central bank.

Kazakh firms have become famous in recent years for launching initial public offerings on the London exchange.  But, says Marchenko, the next wave could just as easily be in Hong Kong.  And, as important, Kazakhstan’s economic elite increasingly looks to Beijing (and others in Asia) because, well, “that’s where the money is.”

“Over-relying on London was a mistake,” Marchenko says.  “London was extremely important because that was where the money was.  Increasingly, the money is shifting eastward … People take for granted that most of the Kazakh, Russian and Ukrainian companies are doing their IPOs in London,” he adds. “But, excuse me, that’s been the case just for the last nine years.  My point is that in five years, it could be some place else.”

Marchenko adds that Kazakhstan is considering further major infrastructure projects, with Chinese support.  “If there are projects, there is definitely money in China which could be invested in Kazakhstan,” he says. “If they eventually start building a high-speed rail link from Beijing to Europe, and if they build it using their money and our territory, well why not?”

This is revealing stuff.  And it’s not all that surprising that this shoe has (finally) dropped.

For a landlocked region, like Central Asia, one essential question has been how to tap and ride others’ economic growth stories.  And Asia’s growth story is a phenomenon that, until recently, has left Central Asia largely untouched.

In 2006 and 2007, I served as deputy assistant secretary of state for Central Asia, serving at a time when the United States sought to reorient its strategic thinking about the region by putting the “Asia” back into “Central Asia.”  Our boss, Secretary of State Condoleezza Rice, had reorganized the State Department around this concept in 2005, moving the Office of Central Asian Affairs from the European bureau into a new Bureau of South and Central Asian Affairs.  And her decision met resistance, including from leaders in the region.  “We’re European,” exclaimed one Central Asian president, “not Nepalese!”

But, in that context, Marchenko’s argument bears close listening, for, in effect, those old debates have come full circle.

For some in the United States, the principal reason for the reorganization was to better connect Central Asia with Afghanistan, unlocking trade and transit opportunities for both.

But I always thought the issue was much larger—namely, to connect a landlocked group of economies to a broader set of opportunities in the global economy.  In July 2007, I told an audience of Central Asian trade ministers and U.S. businesses that proximity to Asia could, under the right set of infrastructure and market conditions, give Central Asia a few more advantages.  Geography matters.  And so, too, does intellectual orientation:  Is Central Asia a “remote” region, lying at the eastern periphery of a collapsed Russian/Soviet empire?  Or is Central Asia a peripheral region that lies next door to some of the world’s most dynamic and fast-growing economies to its east and south?

The choice doesn’t have to be mutually exclusive.  But thinking about Central Asia as part of “Asia” in this way would mean thinking through a broader set of opportunities—and then searching for economic solutions to achieve them.

Marchenko’s comments (and those of others in Central Asia) strike me as significant because they suggest that Central Asians, too, are reorienting their economic geography.

I raise these issues here because China’s dramatic reemergence in Central Asia as lender, trader, builder, and energy consumer has helped to answer questions we were asking back in 2006 and 2007—albeit not quite in the way American policymakers had in mind.

Central Asia was once integral to the Silk Road and the great caravan trade.  But it was pushed to the fringes of the world economy in the 17th century when the marginal cost of maritime trade dropped below the marginal cost of continental trade.  World Bank research shows that, today, landlocked countries, such as those in Central Asia, can face a growth deficit as high as 1.5 percentage points because transaction and other costs are so high.  Reconnecting Central Asia to the world through infrastructure and market forces is essential to bolster opportunities for growth and security.

Central Asians look warily at China, fearing its ambitions.  But make no mistake, China’s money, among other things, has made it a surprisingly attractive partner.

For the U.S., the key is to make sure that regions like Central Asia have options in every direction on the compass.  The U.S. should be working to diversify trade, transit, infrastructure, and market links not just from one (trans-Russia) to two (trans-China) directions, but also to three (trans-Caspian) and four (trans-South Asia).  Put simply, more links in more directions on the compass can help reduce Central Asia’s vulnerability to political and economic pressure from a single source.

Suu Kyi’s Release: What Does it Mean?