This is Brad Setser once again. Thanks to both Rachel Ziemba and Paul Swartz for filling in for me last week. I rather enjoyed not having to write a post every day ...

China has now released data on the PBoC’s other foreign assets (what I have called China’s hidden reserves) for December. The US TIC data for December is now out at as well. The two together permit us to paint a reasonably comprehensive picture of Chinese demand for US financial assets in 2008. This post updates the estimates of China’s true demand for US assets laid out in my paper with Arpana Pandey.* It consequently touches on the central subject of Geoff Dyer’s FT analysis piece, namely the scale of China’s holdings of US assets and China’s willingness to continue to add to its US portfolio.

Let’s start with China’s foreign portfolio. The PBoC’s other foreign assets didn’t fall in December. This means that the state banks’ required RMB reserves were reduced when the PBoC cut the reserve requirement then, not their required dollar reserves. It consequently is nearly certain that China has around $2.2 trillion in reserve-like assets -- the $1.95 trillion in formal reserves, another $180b in "other foreign assets" (the foreign exchange the state banks have on deposit with the PBoC to meet a portion of their reserve requirement) and roughly $90b at the CIC (this excludes the funds the CIC has injected into state banks). The first three lines of the following graph consequently are pretty certain. The fourth line -- which tries to estimate the foreign exchange held by the state banks -- less so. I estimate that the state banks have around $200 billion in foreign assets, which brings the total foreign assets of China’s government to around $2.4 trillion. But I would be the first to concede that my estimate for the state banks’ foreign holdings is a more or less a true estimate -- not a number that can be dug out of Chinese data if you know where to look. 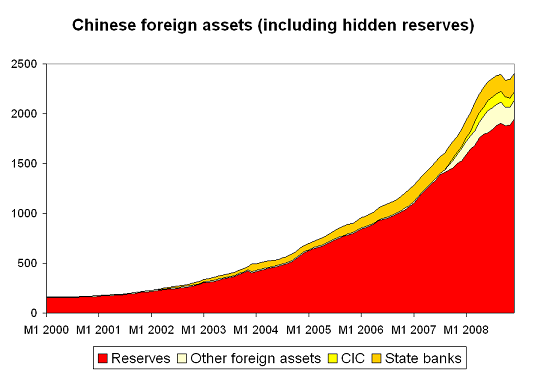 There is no doubt that substantial sums of foreign exchange were shifted to the state banks through the use of swaps (in 06) and various recapitalization schemes (BoC and CCB in 2003, ICBC in 2005, CDB in 2007 and now ABC). There also is little doubt that the state banks are increasingly using that pool of funds to finance Chinese state firms "going forth" rather than to buy US bonds. The state banks almost certainly got burned on the US bonds that they bought in 2006. The only real question is the scale of their remaining holdings, and what the state banks have done with the funds that are no longer invested in foreign securities. My estimates for the state banks’ foreign portfolio is based on data the PBoC releases on the state banks foreign currency balance sheet, but I am not fully confident that my methodology really works.

On one point though there should be no doubt: China’s government is no longer adding to its foreign assets at quite the pace it once was. Something clearly changed in q4 2008. The growth in China’s foreign assets slowed even as China’s trade and current account soared. The most likely explanation is a rise in speculative capital outflows. 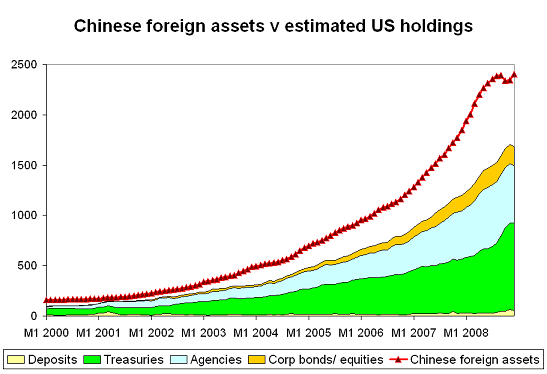 The data used to produce the previous graph can be used to plot the 12m change in China’s US holdings -- and to compare the growth in China’s holdings to the valuation-adjusted change in China’s foreign assets. As one would expect, record reserve growth over the course of 2008 translated into record purchases of US assets. 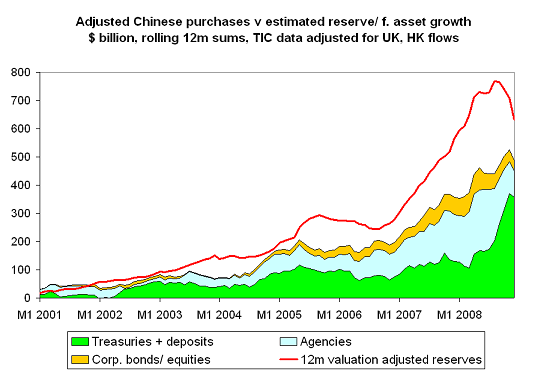 China’s government provided -- best that I can tell -- close to $500 billion of financing to the US in 2008. That is a stunning sum. It should go without saying that I -- like many in China -- believe China now has more exposure to the US than is in its long-run interest. I also believe that the US relies far more on a single government for financing than is in its long-run interest. Both parties consequently should have an interest in moving -- gradually -- to world where China provides less ongoing financing to the US. In the interim, though, China’s exposure to the US is likely to be an ongoing source of friction. As Geoff Dyer reports, China now seems to want some influence over US macroeconomic policies -- something the US historically has resisted.

An estimated $330 billion of the estimated $490b increase in China’s foreign assets went into Treasuries. And over the past three months, almost all the growth in China’s Treasury portfolio has come from its rapidly growing holdings of short-term bills not from purchases of longer-term notes. Fang Shangpu, a deputy director of SAFE, recently told a news conference (as translated by Andrew Batson of the Wall Street Journal):

Since the sub-prime crisis evolved into the international financial crisis in September last year, we have executed the central authorities’ plans to cope with the international financial crisis and launched the emergency response mechanism. We have closely followed developments, made timely adjustments to risk management, taken decisive and forward-looking measures to evaluate and remove risks ...

In practical terms, China’s efforts to "evaluate and remove risk" meant selling financial assets with a bit of credit risk and buying Treasuries. It is an open secret that China is one of the big institutional accounts who have recently lost interest in Agency bonds.

The December TIC data suggests that China’s purchases of Treasuries -- not just Chinese purchases of Agencies -- is starting to slow. That is too be expected; the slowdown in China’s reserve growth should lead to reduced Chinese government purchases of US assets. And private Chinese purchases financed by hot money outflows wouldn’t show up in the US data at all.

The recent dynamics show up clearly in a plot that compares China’s estimated foreign asset growth (using the average of the last three months), China estimated purchases of US treasuries (also using a rolling 3m average) and its estimated purchases of all fairly safe US assets (Agencies as well as Treasuries). The three month average (and the three month sum) of China’s Agency and Treasury purchases historically has tracked China’s estimated reserve growth fairly well.** Recently though China’s purchases of Treasuries topped its reserve growth. That is only possible if China was reallocating its portfolio toward the safest asset around. 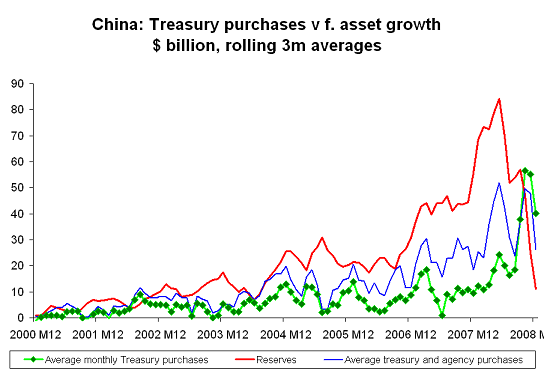 What about 2009? Well, if China’s reserve growth remains subdued because of ongoing "hot" or "speculative" outflows, China’s purchases necessarily will fall off their 2008 pace. Once China’s shift from Agencies to Treasuries ends, its Treasury purchases will also slow.

Yet so long as China’s current account surplus continues to grow (as imports fall faster than exports), China will necessarily be adding to its foreign assets and financing a deficit elsewhere in the world. If hot outflows continue, private outflows will just substitute for the growth in the portfolio of China’s government. And, well, tracking those private flows is a lot harder than tracking government flows.

After four years, I am reasonably confident that I know where to look to find the traces SAFE leaves in the US TIC data. But I have no idea how to track how the global banking system uses an increase in the offshore dollar deposits of Chinese residents.

* The core insight of the paper is simple: the pattern of past data revisions suggests that some of the purchases of US Treasury and Agency bonds attributed to UK and Hong Kong in the TIC data really should be attributed to China.

** I am quite proud of the close match between the two series. Remember that I am estimating the currency composition of China’s reserves as well as using the TIC data to estimate China’s pattern of US purchases. The fact that both estimates match reasonably well increased my confidence in both estimates. The estimates incidentally are based on entirely different data sets. The data on China’s foreign assets is derived entirely from Chinese data sources, together with an estimate of the dollar share of China’s portfolio. The estimates for China’s US purchases come entirely from the US data. The US data does influence my estimate for the dollar share of China’s reserves -- which is a key input into estimating the impact of currency moves on China’s reported asset growth. But otherwise the two data sets are derived independently.

How Are GCC (and Other) Sovereign Funds Faring? An Update