Most of the headlines reporting on China’s May trade data focused on the small y/y fall in China’s trade surplus. Given the rise in the price of oil, China’s surplus should be falling. The surprise is that it isn’t falling more.

The real surprise in the May data was the strength of Chinese export growth. May exports were up 28% year over year. That is quite strong. Exports were only up 22% in April. 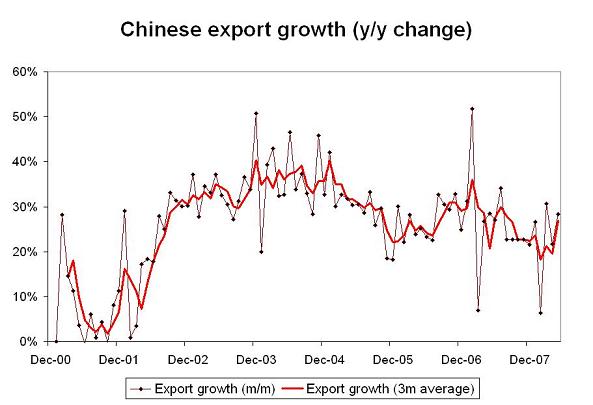 If the recent rise in export growth is a blip and the 22% increase in China’s year to date exports (January-May 2008 v January-May 2007) is projected out along with the 31% import growth, China’s trade surplus would shrink, but only modestly. It would still clock in at $240 billion.

The obvious point to make is that China’s currency remains weak against most other currencies. The RMB is at weak against the euro as it was at the end of 2004. In real effective terms, the IMF’s data indicates that the RMB is no stronger now than in 2000. Nothing else about China is anywhere close to its 2000 level. Productivity is way up. Exports have gone from $250 billion in 2000 to a projected $1500 billion in 2008. The RMB should be much stronger in real terms.

It doesn’t take a rocket scientist to figure out why China’s exports to Europe are growing three times as fast (28% v 9%) as its exports to the US. Li Yanping and Nipa Piboontanasawat report:

Exports to the U.S. rose 9.1 percent in the first five months from a year earlier, up from the 6.9 percent gain through April, the customs bureau said. Shipments to the European Union climbed 27.4 percent, an increase from 25.4 percent.

But that may not be all. The RMB, while weak, is appreciating in real terms for the first time in a long time. Higher inflation is one mechanism for real adjustment. The oil exporters are booming, but the US is not. Overall, it isn’t precisely the kind of environment that should produce a return to 30% y/y export growth.

What other explanations are there?

Base effects are one possibility. Bloomberg reports that May exports and imports both were on the low side last year because of an usually large number of vacation dates. Low 2007 exports in turn helped push up the y/y growth rate. Some of the apparent acceleration may disappear with the June data. China’s data isn’t seasonally adjusted, and the various holidays can play havoc on the data.

The other possibility is that Chinese exporters are over-stating their exports in order to create the legal basis to move money into China (an exporter has the legal right to sell dollars for RMB). Strong export growth in May -- according to this theory -- would be a response to China’s efforts to tighten its controls on capital inflows. Michael Pettis reports that some folks have found quite ingenious ways to get money in.

I generally have been skeptical of the argument that China’s trade surplus is overstated by disguised capital inflows. That argument always crops up when China’s exports surprise on the upside. And most of the growth in China’s exports over time seems to be real. But given the strong incentives to move money into China created when US rates are lower than Chinese rates, I am no longer quite as confident that all of the surplus is real.

But if it is, it almost goes without saying that the apparent reacceleration in China’s export growth is inconsistent with a necessary adjustment in the world economy. If China’s surplus rises this year in the face of a massive oil shock, the deficits of the other oil importers have to be correspondingly bigger. Right now China’s surplus should be falling, not rising. And right now China’s own domestic conditions also call for a stronger not a weaker RMB.

NOTE: The last paragraph has been edited; it initially said deficits of oil exporters when I meant the deficit of the oil importers. Mark Williams’ comment suggests -- persuasively in my view -- that a reduction in the May holidays likely explains the year over year export increase. The June data should settle this.

Should SAFE be considered a SWF?