Skip to main content
How far will the US trade deficit fall next year?

US exports have been growing faster than non-oil imports for the last two years. The August trade data hints at a slowdown in exports. But at least on a y/y basis, the slowdown remains modest. 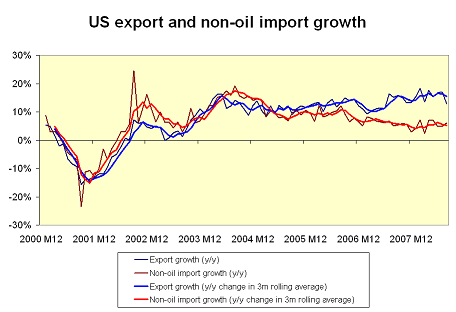 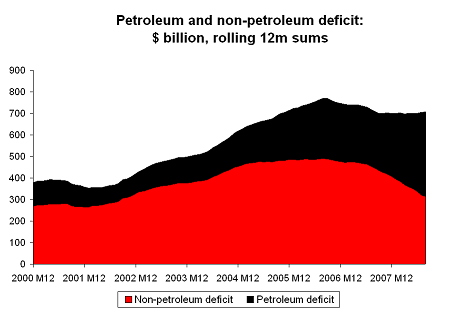 But oil is now on its way back down. What kind of improvement can the US expect?

Well, if oil falls to $70 and stays there, the petroleum deficit will fall substantially. Over the course of the year, the annual United States oil import bill could fall back to just under $300b -- a roughly $100b improvement over the deficit of the last 12 months (and a much bigger improvement from the last three months, when imported oil averaged $120 a barrel).

And if the exports can continue to grow 9-10% faster than non-oil imports, the non-oil deficit will also continue to improve. 1% nominal (non-oil) import growth, 10% nominal export growth and $70 oil produces a 2009 deficit of around $400b -- almost $300b better than now. 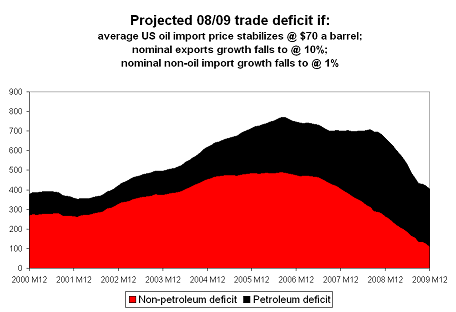 5% nominal export growth and a 5% fall in nominal imports would produce a similar result, but obviously implies a much worse trajectory for both the US and global economy.

The main risk to the forecast improvement is simple: US export growth ends up slowing more rapidly than US import growth, reducing the gap between the two growth rates. If US non-oil exports and non-oil imports both fell by 5%, the trade deficit would improve (the US imports more than it exports), but it wouldn’t improve by all that much.

Of course, all of these projections are just that -- projections. They mechanically illustrate the impact of different assumptions about oil prices and non-oil import and export growth rates on the overall balance. They aren’t true forecasts.

And any forecast for the trade deficit (which tracks the current account balance for the US well right now, as the transfers deficit is offset for the time being by a surplus on the income balance) needs to be consistent with a broader macroeconomic view of the savings and investment balance.

Fortunately, don’t think that it is all that hard to tell a broader macroeconomic story that is consistent with a significant improvement in the trade balance next year.

On the oil side, the core assumption is that the fall in the oil price reduces the oil exporters savings rather than their domestic consumption and investment -- so the fall in oil prices doesn’t feed through to a fall in their imports (read US exports).

On the US side, the assumption is that the windfall from lower oil prices is saved rather than spent on other goods and services. Indeed the overarching assumption of this forecast is that private consumption growth slows (and perhaps falls) and private investment falls in the US -- and as a result American savers end up lending far more to the government than in the past. The shift in the private savings and investment balance in turn makes a dramatic rise in the fiscal deficit consistent with a fall in the current account deficit. Deutsche Bank -- according to Menzie Chinn -- is now forecasting both an 8% of GDP US fiscal deficit (well over $1 trillion) next year and a significant improvement in the current account deficit.

Thanks to Arpana Pandey of the CFR for help with the graphs.

Where is my swap line? And will the diffusion of financial power Balkanize the global response to a broadening crisis?