Make sure it is the latest World Bank China Quarterly.

David Dollar, Louis Kuijs and their colleagues have outdone themselves – and in the process provided a clear assessment of the sources of China’s current slowdown and the risks that lie ahead. I won’t try to summarize the entire report. Read it. The whole thing. No summary can do it justice.

Here though are seven points that jumped out at me.

1. China was no workers’ paradise during the boom years.

GDP growth has been quite strong. But wages have fallen from around 50% of China’s GDP at the start of the decade to around 40% of GDP. That – not a high rate of household savings – is the main reason why consumption is a very low share of GDP (See Figure 15 of the World Bank Quarterly). If China’s workers had secured a bigger share of China’s output, they could be better off now even if China had grown somewhat less rapidly. There is good reason to think that a world where China subsidies US borrowing (and consumption) isn’t the best of all possible worlds. The fruits of the recent boom weren’t shared broadly in either the capital-exporting countries or the capital-importing countries.

2. China really is a manufacturing and investment driven economy.

Even when compared to Korea in 1990 or Japan in 1980, China stands out. Investment accounts for a large share of GDP than it ever did for the smaller Asian miracles and manufacturing accounts for a higher share of China’s GDP than it ever did in other Asian manufacturing economies (Figure 14). Given China’s size, it is pretty clear that China cannot continue to grow by investing ever more and manufacturing ever more. China ultimately has to produce for Chinese demand not world demand.

3. China’s current slowdown was made in China, not in the world.

Yes, growth in “light manufacturing” (toys, shoes and textiles) has slowed. But electronics and machinery exports are still doing very well – even if they don’t get the press (Figure 3). Or perhaps I should say were still doing well in the third quarter; must has changed recently. China’ problem this year is simple: labor intensive export sectors have slowed more than capital intensive export sectors. Overall though China’s real exports grew at a 10-15% y/y clip in 08 – far faster than the overall growth in world imports. China’s real export growth is forecast to outpace its real import growth in 2008 – which implies that net exports will still contribute positive to China’s GDP growth. True, the net exports won’t provide as much of a positive contribution as in 07, 06 or 05. But they are still adding to growth not subtracting from it.

Why then is China slowing so sharply? Simple, real estate investment has hit a wall. After growing at 20% y/y for a long time, real estate investment stalled – with a y/y growth rate of around 0% (Figure 5). That means that China is in turn producing more steel and cement than it needs, and producers of steel and cement are cutting back. That in turns hurts iron ore exporters …

This though is very much a result of China’s own policy choices. Rather than allowing the real exchange rate to appreciate back when China was truly booming (05-late 07/ early 08), China’s policy makers opted to rely on administrative curbs on credit growth. That left China more exposed to global slump in demand – as it kept exports up by limiting real appreciation even as it credit curbs limited the amount of froth in the real estate market back when China was booming and real interest rates were negative. China invested a lot in real estate, but it is no Dubai. But China’s policy makers still look to have slammed the brakes on a bit too hard. Rather than slowing gradually, real estate investment fell off a cliff (Figure 5).

4. There is more bad news ahead.

While real exports contributed positive to GDP growth in 2008, they won’t contribute in 09. The World Bank forecasts that for the first time in a long time, 2009 real import growth will exceed real export growth. In 2005, real exports grew about 10% faster than real imports (23.6% v 13.4%). Many economists remain – for reasons that to be honest elude me – reluctant to draw the obvious connection: the most likely explanation for China’s strong real export growth is the large depreciation the RMB in 2003 and 2004. That combined with administrative controls – which limited lending, investment and ultimately imports – to create China’s large current account surplus. Real export growth exceeded real import growth by 5 percentage points in 2006 and 2007 – and by 4 percentage points in 2008.

The positive contribution of net exports to GDP is forecast to end in 2009: real import growth will exceed real export growth by 3 percentage points.

That though doesn’t mean that China’s currency isn’t undervalued. China’s exports are forecast to grow faster than the world’s imports, meaning China’s global market share is still increasing (see Figure 2). And if 2008 and 2009 are taken together, China will still be drawing on the world for its growth: the drag from net exports in 09 will be smaller than the contribution from net exports in 08 (see Table 1)

I fully realize that China is appreciating quite significantly now in real terms – just global demand for China’s goods is falling (Figure 11). The tragedy is that this appreciation is coming now – not two or three years ago when domestic Chinese demand was booming and China didn’t need to draw on the rest of the world to sustain strong growth.

5. The fiscal stimulus is real, but modest. China’s fiscal balance is expected to swing from a 0.7% of GDP surplus in 07 to a 2.6% of GDP deficit in 09. That is a 3.3% of GDP swing. In 2009 alone, China’s deficit is forecast to rise by 2.2% of GDP. See Table 1. That shift is important and will help to support China’s growth– but it will likely lag the swing in the US fiscal deficit. Hopes that surplus countries will end doing more than deficit countries seem unlikely to be ratified.

6. The last thing anyone needs to worry about is fall in Chinese demand for US treasuries.

The Treasury market obviously isn’t worried - not it 10 year Treasury yields are under 3%. And there is little reason for the bond market to be worried if current trends continue.

The World Bank forecasts that China’s current account surplus will RISE not fall in 2009, going from an estimated $385 billion to $425 billion. How is that possible if real imports are forecast to grow faster than real exports? Easy – the terms of trade moved in China’s favor. The price of the raw materials China imports will fall faster than the value of China’s exports. China’s oil and iron bill will fall dramatically.

In macroeconomic terms, China’s fiscal stimulus will offset a fall in domestic investment leaving China’s current account (i.e. savings) surplus unchanged. The 2009 surplus is expected to be roughly the same share of China’s GDP (9%) as the 2008 surplus.

In dollar terms, the World Bank forecasts that China will add almost as much to its reserves in 2009 than in 2008. That is a bit misleading: the 2008 reserve growth number leaves out the funds shifted to the CIC (ballpark, $100b in 08) and the rise in the foreign exchange reserve requirement of the state banks (ballpark, another $100b). But it captures a basis truth. Even if a fall in hot money inflows means that China will be adding $500b rather than $700b to its foreign assets, its foreign assets will still be growing incredibly rapidly. China already has – counting its hidden reserves – well over a $2 trillion. It is now rapidly heading for $3 trillion.

In broad terms – if oil stays at its current levels – China will be the only large surplus country in the world, and it will essentially be financing a US deficit of roughly equal magnitude to China’s reserve growth. It makes everything plain to see.

7. The way China manages its reserves matters immensely for the world not just China

China shifted from buying Agencies to buying Treasuries in July. Others did too, but no one has quite the market impact of China. China doesn’t disclose what it is doing with its reserves, but the recent shift in Chinese demand isn’t really in doubt. The market knows it. The TIC data for August showed it. And the latest Fed data strongly suggest large ongoing migration from Agencies to Treasuries. 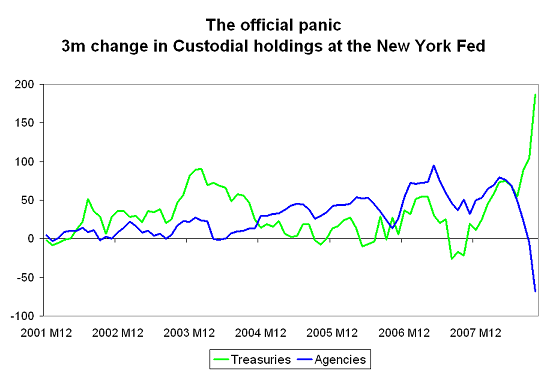 China now accounts for such a large share of the world’s reserves that it is hard to see how the FRBNY’s custodial data doesn’t reflect, at least in part, a shift in Chinese demand.

A key themes of this blog has been how the internal imbalances of China’s economy are a reflection of its undervalued exchange rate – and that China’s surplus has implications for the world. It has to be balanced by large deficits elsewhere. Another key theme has been that the Fed has been pushed to absorb risks that other central bank reserve managers now shun. Nothing illustrates this more clearly than the Agencies. Foreign central banks are scaling back their Agency holdings. The Fed is gearing up to buy. Big Time.

One last note: I am taking a few days off for Thanksgiving – I’ll be posting again next week.