A year ago I marveled at the sheer size of China’s reserve growth. China was adding to its stockpile of foreign exchange at rates that seemed almost unbelievable. That is no longer the case. But in other ways China continues to churn out the kind of data that I never expected to see.

I never, for example, though a country where investment is growing by more than 30% -- Andrew Batson reports "Fixed-asset investment, China’s main measure of capital spending, rose 38.7% in May and is up 32.9% for the year so far" -- would be spending 25% less on imports. Batson again:

"Merchandise exports in May fell 26.4% from a year earlier, China’s Customs agency said Thursday, accelerating from April’s 22.6% decline as global demand remained weak. China’s imports also extended their fall, dropping 25.2% in May from a year earlier after shrinking 23% in April."

Investment booms fueled by a surge in domestic lending usually lead to import booms. That was the case with the Asian tigers in the 1990s, the US at the peak of its dot home bubble and the real estate boom in the oil exporters just prior to the crisis. It was also the case in 2003, when a surge in bank lending triggered a surge in investment in China (just as Chinese exports were also surging). But it isn’t the case, at least so far, in China today.

As both Macroman and Edward Hugh have observed, the rebound in Chinese import demand has been rather anemic. May imports were actually a bit lower than April imports. 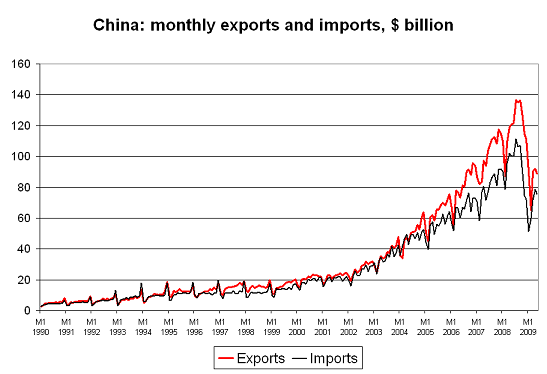 Obviously the data has been shaped by the large fall in commodity prices, which pushes the value of China’s imports down in any y/y comparison. Real exports are certainly down more year over year than real imports.

On the other hand, real imports seem to have been pushed up by a decision to build up stockpiles of key commodities. Look at Macroman’s impressive charts -- or the details of the trade data (see Danske). Batson reports that China bought 38% more iron than in May last year. Citi reports than aluminum and copper imports are also way up. All are up more than can be explained by even the very strong reported rise in investment. That is why ships loaded with iron are idling off China’s coast.

Seasonality -- according to Danske Bank -- may explain why China imported a bit less in May than in April. Their seasonally adjusted real import series shows a bit of growth in May -- though they are still down a bit y/y in real terms.*

There is no doubt that imports are a bit higher than they were this spring (the January fall in imports was huge), especialyl of commodities. But a chart showing the y/y growth in the 3m moving average of China’s imports and exports doesn’t show much difference. Both are now down close to 25% -- and the improvement in the import data on this measure stalled in May. 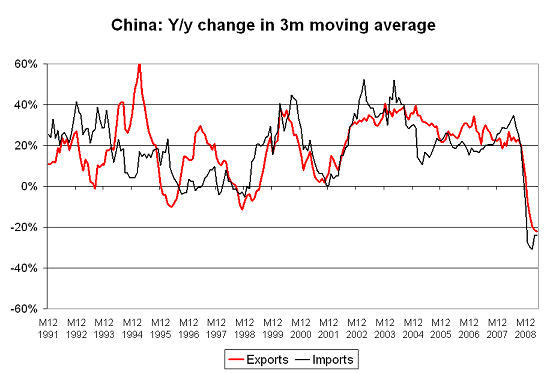 The y/y change in monthly exports and imports is more volatile. If January’s extremely large fall (influenced by the timing of the new year) is set aside, the underlying trend on nominal imports is still down -- though that reflects in part the upward move in commodity prices and thus the dollar value of commodity imports last spring. 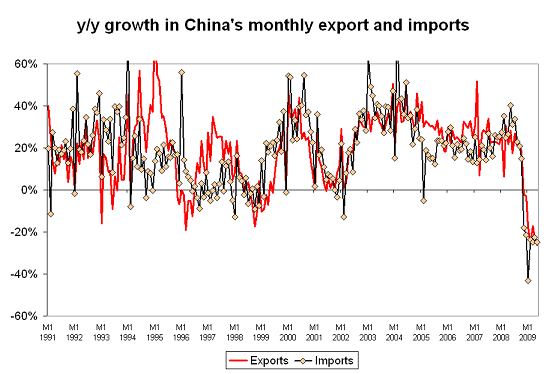 And I fully realize that nominal data will be shaped by the fall in commodity import prices -- I’ll try to get some disaggregated data that isn’t shaped as much by this. But the y/y changes still give some indication of the trend. And nominal imports aren’t moving in the same way as fixed investment. And imports from places like Korea (through May) and the US (through April) aren’t really showing much of a rebound.

One last chart: the y/y change in a 3 month rolling sum of Chinese imports and exports, in $ billion. I like this chart because it clearly shows the sustained nature -- and the scale -- of the boom in China’s exports over the past eight years, as well as the magnitude of the current fall. 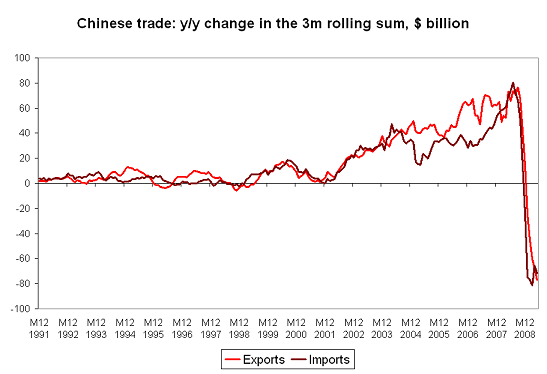 The sharp fall is over. But there isn’t yet much sign of recovery. Not in Chinese demand for the world’s products. Or in Chinese exports to the world.

To me, though, the biggest puzzle is on the import side. A strong, growing economy driven by a surge in fixed investment would normally be expected to generate strong demand for the rest of the world’s goods, especially if China is growing far faster than the rest of the world.

UPDATE: A correspondent notes that -- per Citibank -- the purchase of land is included in the fixed income investment data, and thus large land purchases could explain why soaring investment hasn’t produced stronger import growth. Citi:

"“The value of land and used facilities and equipment are included in fixed asset investment (FAI). These values take a significant share of the total investment (as much as one third for some projects), and are generally accounted for in a lump sum at the beginning of a project. In January-April, the number of new projects totaled over 86,000, worth Rmb3.7trillion, up 45% and 91% yoy, respectively. These projects would take several years to finish, but the land involved is already accounted for and naturally frontloads growth…”"

* I am a bit suspicious of the upturn in real imports in Danske’s 3m/3m change chart. The challenge here is that seasonality normally drives a pick up in import demand as China’s economy rebounds from its normally slow New Year start. Picking out the additional impact of the stimulus from this normal rebound is a challenge. The seasonal adjustment ends up driving a lot of the data. Plus the import data likely has been distorted a bit by stockpiling. Above all though I just haven’t seen a comparable upturn in exports from places like Korea and the US to China.