Skip to main content
Last week&#8217;s data flow supported the US adjustment optimists &#8230; not the pessimists

The trade deficit fell back under $60b in April -- see Jeremy Peters' coverage in the New York Times.  The fall in the overal deficit stemming more from a fall in non-oil imports rather than from a rise in exports.  That doesn't suggest a strong underlying economy, but it did help the trade balance.   The overall balance was also helped by a fall in the volume of imported oil, which offset a rise in the oil price.

The overall trade deficit has stayed close to its q4 2006 levels so far this year -- and thus stayed below its level for most of 2006.  As importantly, the Fed's flow of funds data didn't show much deterioration in the US income balance. The flow of funds coomes out before the balance of payments data, and covers much of the same ground -- though in slightly different way.

The absence of much deterioration is a bit of a surprise, at least to me.   The basic logic behind a deterioration in the overall income balance is simple: US rates are rising, and the US should have well over $11 trillion in gross external debt by the end of the year.

The US adjustment optimists break into two camps.   Some, like Calculated Risk, are optimistic about the prospects for adjustment in large part because they are pessmistic about the US economy.  Calculated Risk argues that the rise in mortgage equity withdrawal led to a surge in consumption and imports, and that the fall in mortgage equity will trigger a slowdown in consumption growth -- lowering imports and thus the trade deficit.

Others, like Stephen Jen, are optimistic about both the US economy and prospects for global adjustment.  They expect the US to pull out of its housing-induced growth slump -- but don't expect a reacceleration in US growth to drive up the trade deficit.   Strong global demand growth will help the US for once.

Pessimists worry about the evolution of the US income balance, and about ongoing -- and somewhat puzzling -- signs of weakness in US exports (including weak capital goods exports).  The April data didn't really change the story.  The q/q growth rate (February-April v November-January) is still falling ... 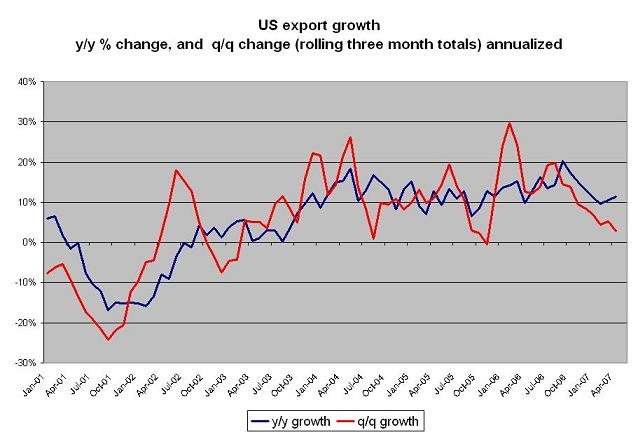 The data in the chart only covers goods.  Services exports seem to be doing better ...

But there is another set of data that also doesn't paint all that optimistic a picture.    For the US current account deficit to fall, someone else's surplus needs to fall.   And, well, it is hard to find evidence of such falls.

The oil exporters surplus is falling on the back of a spending and construction boom.  And some of the improvement in the eurozone's external balance may be coming from a rise in Eastern Europe's deficit (as well as a falling oil import bill and more exports to the oil states).     Some of the rise in the surplus of Japan and China also may be coming at the expense of others in Asia.

But it still seems, at least to me, that the fall in the oil exporters surplus is more likely to be offset by a smaller deficit in Europe and a rise in Asia's surplus than a big fall in the US deficit.

I hope I am wrong.  This is clearly the time when the US external balance should be improving.