That isn’t exactly news. Those who follow the TIC data closely had little doubt that Russia was reducing its Agency portfolio. 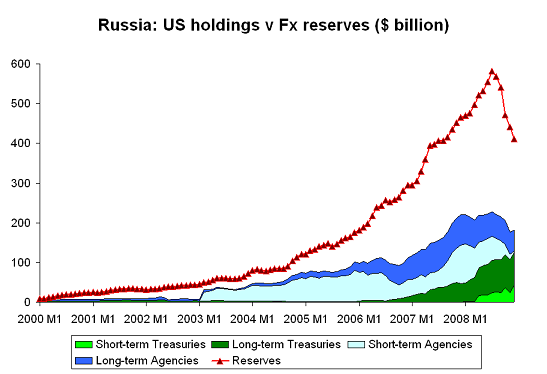 But the fact that Russia explicitly indicated its sovereign fund would shy away from illiquid Agencies is news. It underscores that most sovereign investors -- sovereign funds as well as central banks -- are shifting into the Treasury market. And it also highlights just how amorphous the distinction between sovereign wealth funds and central bank reserves really is.

Russia’s sovereign fund was always quite conservative. Or at least its external portfolio was always managed fairly conservatively. It was primarily a fiscal stabilization fund, not an endowment fund -- so this made some sense. Its existing guidelines implied that it couldn’t buy much of anything other than Agencies and Treasuries. Before the current crisis, Russia was planning to lift those restrictions so that its "future" fund could take on a bit more risk to try to eke out higher returns. But the world has changed. And now even government-backed Agencies are too risky. Reuters reports:

"Russia on Thursday banned investment of its $220 billion sovereign wealth funds in bonds of agencies such as Fannie Mae and Freddie Mac saying it needed more liquid assets to meet the needs of its own budget. Russia had about $100 billion of its foreign currency reserves invested in U.S. government agencies at the start of 2008 as it sought to broaden its portfolio and chased higher yields. It has now cut its holdings to zero while the foreign currency reserves, the world’s third largest, fell by a third to $384 billion as a result of heavy forex interventions to support the rouble in the recent months. The Finance Ministry said it needs to shift the portfolios in favour of more liquid assets such as sovereign bonds as Russia plans to tap the funds to cover budget and pension fund deficits this year."

Arpana Pandey and I use the TIC data -- both the flow data and the survey data -- to estimate Russia’s portfolio. The last survey suggested that Russia was buying Treasuries through London -- and also selling long-term Agencies through London. That is reflected in our data. Even so, our measure probably understates Russia’s recent sales (which likely picked up after the June 2008 survey) and thus overstates Russia’s current Agency portfolio. 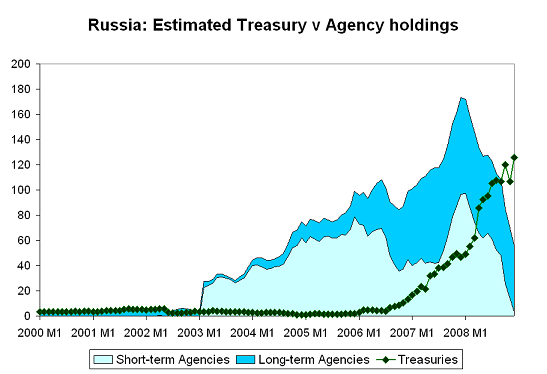 The only thing we truly know for sure is that Russia had reduced its holdings of short-term Agencies to close to zero by the end of December. And that fact alone suggests Russia was also selling off its portfolio of longer term Agencies.

And while Russia is no doubt an extreme case, it is by no means atypical.