One. This was a very weak report. Very modest demand for US financial assets from the rest of the world is creating ongoing pressure for the US to adjust -- that is for the US trade deficit to fall. Net TIC flows -- counting short-term flows -- were negative. And unlike in January and February, the negative flow wasn’t coming from large bank flows stemming from the repayment of the Fed’s swap lines (i.e. change in banks’ own dollar denominated liabilities per line 29). Private US purchases of foreign equities ($9.2 billion) exceed purchases of US equities by private investors abroad ($3.7 billion). Americans also bought $13.8 billion of foreign bonds, while -- if purchases of Treasuries are set aside -- private investors abroad were selling US bonds. That isn’t a good combination for a country with an ongoing trade deficit: Americans wanted to invest abroad more than the rest of the world wanted to invest in the US.

But we also know that this is too low a figure. Central banks holdings of Treasuries at the New York Fed rose by $31.8 billion in April. And a familiar pattern reasserted itself in the data: large purchases of Treasury notes ($22.4 billion) by investors in the UK. A lot of those notes -- based on past patterns - were then sold to central banks and then shifted over to the New York Fed. I would then estimate -- based on the TIC data -- that the real rise in official holdings of Treasuries is close to $27 billion, which fits the custodial data.

Three. The apparent fall in China’s holdings of Treasuries is sure to attract a lot of attention. China’s bill holdings fell by $14.79 billion, while its long-term Treasury purchases were only $10.33 billion. That seems to imply a $4 billion plus fall in China’s Treasury holdings. Looking at the ensemble of China’s US portfolio doesn’t change the picture. Total short-term holdings fell by $22.2 billion, more than offsetting China $7.6 billion in purchases of all US long-term assets (China sold Agencies and corp bonds).

I don’t buy it. This is a case where it helps to know the pattern of past revisions -- especially the pattern of past revisions when oil prices have been low. In such periods, China tends to account for a very large share of purchases through the UK. In other words, some of the $22.4 billion of Treasury bonds initially sold to UK banks were then sold to China’s central bank. From mid-2006 to mid-2007, about 2/3s of the UK’s purchases of Treasuries were ultimately reassigned to China. I would expect the something similar is happening now -- all of China’s bill holdings tend to appear in the US data in real time, but only a fraction of China’s long-term purchases tend to show up directly in the US data. 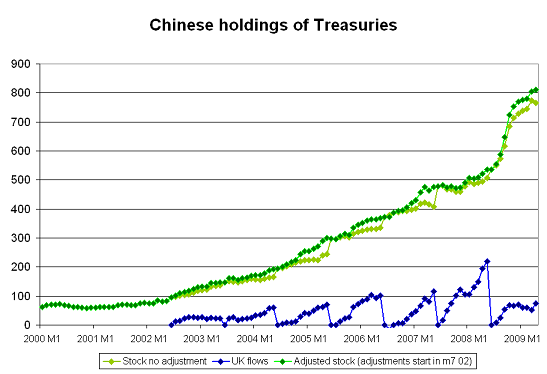 But the rise in China’s Treasury holdings -- even after the adjustments -- was modest. And China isn’t buying Agencies or US corporate bonds. China’s overall US portfolio isn’t rising at anywhere like the pace it did in 2006, 2007 or even 2008.

And ultimately that is a healthy adjustment. The more unwanted dollars China ends up holding, the bigger the ultimate risk of a disruptive shift out of the dollar.