At least not for anything other than commodities, where Chinese demand -- and Chinese stockpiling -- clearly has had an impact. Exports to China from the US and Korea continue to be pretty weak. Exports from the US have bounced back from their winter lows, but still well below their pre-crisis levels. And exports from Korea to China are still down far more than I would have expected. 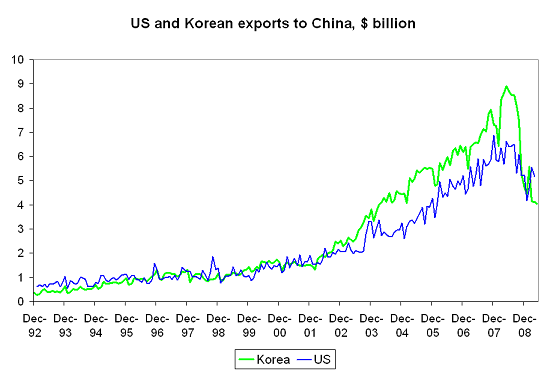 China’s industrial production is up about 10% y/y (9%) even though exports and imports are both down around 25% y/y in nominal terms.

That is a big increase. And it isn’t totally implausible. Lending and investment are way up. So are stimulus driven auto sales. But it also raises the question of why it took China so long to really stimulate domestic demand if it had such latent capacity to grow without relying on exports.

Let’s also assume that imported components constituted around 60% of Chinese imports (consistent with a world where China accounts for only about half of the value-added in Chinese exports) a year ago. Here imports would fall in line with exports. But to produce an overall 25% fall in imported demand, nominal imports for domestic use also would need to fall by 25%.

That brings me back to the data on US and Korean exports to China. Some Korean exports to China may be influenced by the prices of the commodities Korea itself imports. And some are components for goods that are assembled in China. Similarly, some US exports are commodities and some are components. But both presumably also at least partially reflect Chinese domestic demand. Y/y growth in Chinese imports from both the US and Korea, for example, slowed in 2004 after China implied rather draconian limits on bank lending to keep its economy from over-heating.

And right now neither US nor Korea exports are registering y/y growth. The best that can be said is that the fall in Chinese demand for US goods looks to have stopped, and that there is now some evidence of a modest recovery. 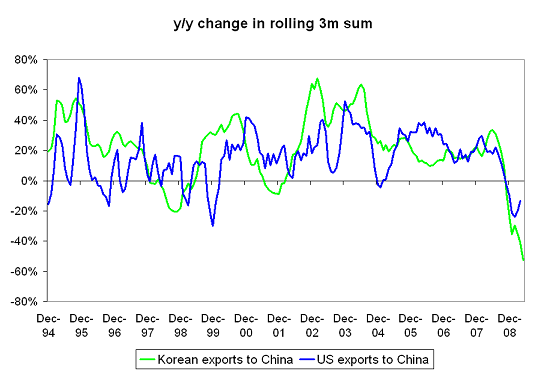 So far at least, the surge in Chinese production hasn’t spilled over into much demand for the rest of the world’s goods.

That could be because China’s recovery has been overstated a bit -- as the electricity use data suggest. Or it could be because China is going through a period of import substitution, and thus able to increase industrial output without increasing imports. But right now -- unless I am missing something -- there does seem to be a significant gap between the strong growth in China’s own demand for its own goods and the lack of growth in Chinese demand for the world’s goods.

China’s stimulus clearly has yet to spillover into world demand for manufactured goods in a major way. That is too bad. After several years when global demand helped spur Chinese growth (as net exports contributed a significant contribution to growth), this would be a good time for China to return the favor. Net exports are likely to subtract from China’s growth this year, as the fall in real exports should exceed the fall in real imports. But it would be nice to real imports actually rise -- and not just for commodities.

Just who bought all the Treasuries the issued in late 2008 and early 2009?