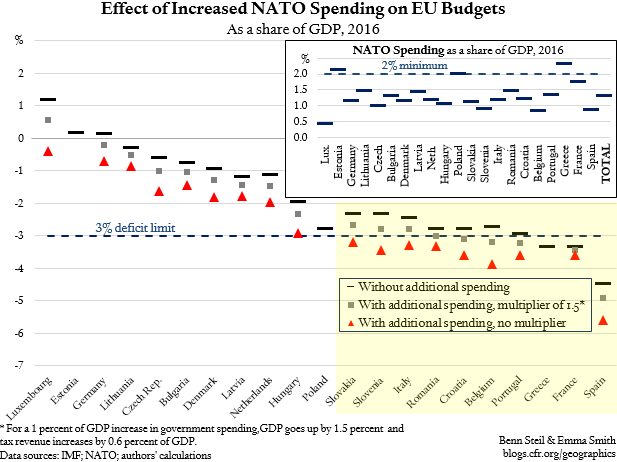 President Trump and Defense Secretary Mattis are putting unprecedented pressure on European NATO members to boost military spending, threatening to reduce America’s support for the alliance if it is not forthcoming.  Whereas the United States spent 3.6 percent of GDP on defense in 2016, its European allies spent a mere 1.3 percent—well below the 2 percent minimum they agreed to in 2006.  Among EU NATO members, only Greece, Estonia, and Poland meet the target. (We’ve left out the UK owing to impending Brexit.)

One major political barrier to increasing such spending is imposed by the EU itself, which maintains a legal limit on budget deficits of 3 percent of GDP.  Although exceptions are made for extraordinary circumstances, and enforcement to date has been limited to threats and shaming, the European Commission is again threatening to fine Italy and others if they fail to take corrective action.

As shown in the graphic above, 10 of the 21 EU NATO members would have broken the 3 percent deficit limit had they raised defense spending to the 2 percent NATO target in 2016—as opposed to just three members at actual 2016 spending levels.  Keynesian-minded economists, such as Paul Krugman, may object that this fails to account for the positive growth effects of higher government spending.  Yet as our figure shows, even a generous 1.5 “fiscal multiplier” assumption makes only a small difference (though it would have pushed Italy, Slovenia, and Slovakia just under the 3 percent limit).

In any case, it is clear that Trump’s demands for more EU defense spending and the Commission’s demands for spending restraint are, at least in the short term, incompatible.  One or the other will have to give.

Why Does the Fed Keep Lowering Its Unemployment Threshold?