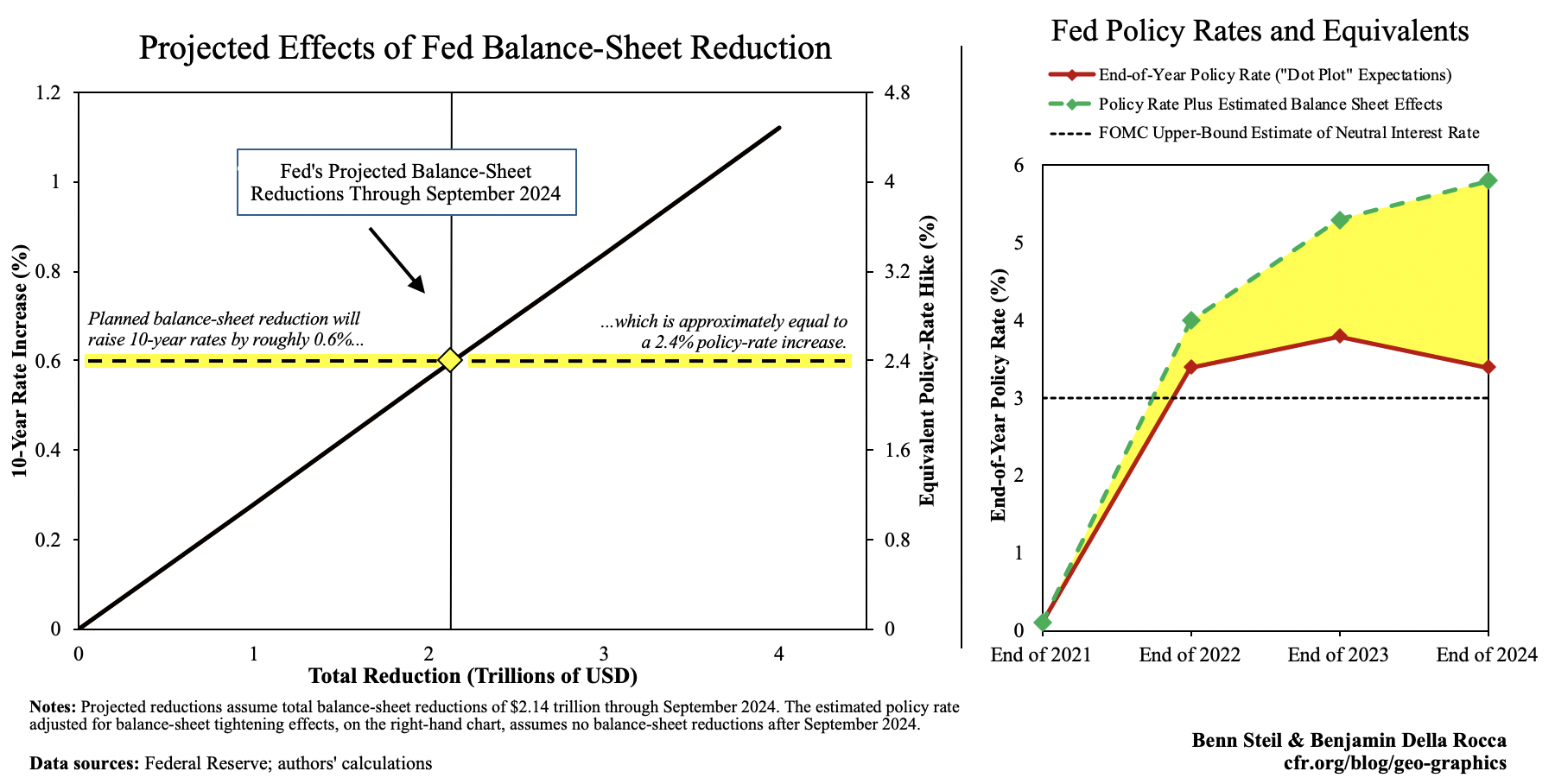 In February 2020, just before the brief COVID-19 recession, the Fed’s balance sheet stood at $4.2 trillion. After 26 months of asset purchases to push down longer-term interest rates, it had ballooned to $8.9 trillion—a $4.7 trillion rise. That increase far surpassed the Fed’s $3.6 trillion in purchases after the 2008 financial crisis.

Now, with inflation at 8.5 percent, its highest in four decades, the Fed has kicked its asset-expansion into reverse. This month it is letting $47.5 billion in maturing securities roll off its balance sheet, without reinvesting the proceeds. It forecasts monthly runoffs to reach $95 billion by August.

Fed Chair Jay Powell, like Janet Yellen before him, has stressed that reducing the balance sheet is meant to be mainly a technical exercise, working “sort of in the background” to return it to a size more appropriate for normal economic conditions—as opposed to the deflationary ones of the early pandemic months.

Still, balance-sheet reduction is necessarily a form of monetary tightening, akin to raising short-term policy interest rates. Specifically, it pushes longer-term bond yields upward. Given that policy-rate hikes affect the economy mainly through the lifting of longer-term rates, which are the primary guides of consumption and investment, identifying this relationship between short- and long-term rates correctly is important.

Powell has said that the monetary impact of balance-sheet reduction is very uncertain; that there are only “rules of thumb.” Fed staff, however, have tried to quantify it. Using a theoretical model, they estimate that the $2.1 trillion in balance-sheet runoffs scheduled through September 2024 will raise 10-year Treasury yields by 60 basis points. And that increase, they further calculate, will have roughly the same monetary-tightening effect as raising the short-term policy rate by 56 basis points.

We’ve compared the output of the Fed staff’s model with actual empirical findings—findings obtained by an earlier group of Fed researchers. According to that earlier study, it takes a whopping 240bp rise in the policy rate to produce a 60bp rise in 10-year rates. If this relationship is correct, it means that the Fed’s total projected balance-sheet runoffs will produce a tightening equivalent to hiking the policy rate by 240bp, and not 56bp. This relationship is illustrated by the horizontal dotted line in the left-hand figure above.

We put more credence in this earlier Fed estimate specifically because it measures the relationship among actual historical data, and is less subject to the “significant uncertainty” which the later Fed study acknowledged in its modeling.

If we are right, then, Powell, whose thinking is clearly being guided by the later study, is underestimating the tightening impact of balance-sheet reduction by a factor of four.

The Fed is, therefore, we believe, on a path to tightening far more significantly than it realizes. Unless it adjusts policy to slow the balance-sheet shrinkage, or to slow rate rises, the contractionary impact on inflation, unemployment, and growth will in consequence be considerably greater than it believes. And this means that a recession is, also, much more likely than it believes.