Nearly two hundred countries will meet for two weeks beginning on Monday, November 30, in Paris to conclude a new climate agreement. Here’s what to watch for, what to ignore, and what comes next when the diplomats leave town.

The Hardest Work Is Already Done

The popular image of climate summits, so far as one exists, imagines diplomats convening to haggle over how much to cut emissions and how to divide the resulting burden. Paris will be different. Two years ago, at the nineteenth annual climate summit in Warsaw, countries agreed to develop and present their emissions-cutting plans before Paris. Every country whose emissions matter—including, most importantly, the United States and China—has done that. 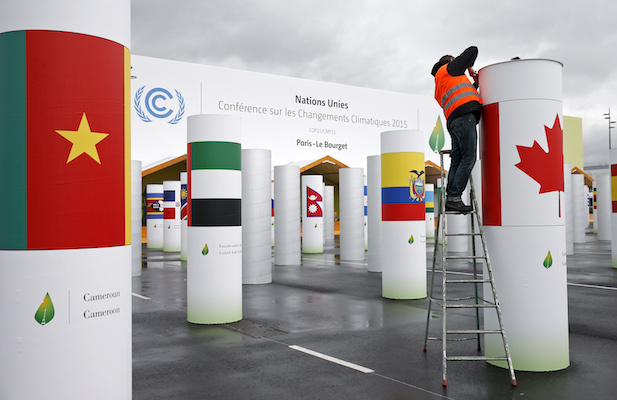 Men work on the site where the upcoming COP21 World Climate Summit will be held at Le Bourget, near Paris. (Photo: Benoit Tessier/Reuters)

Crafting those plans typically involved serious work to figure out what was technically feasible and politically practical. China announced that its emissions would peak by 2030 and that it would generate 20 percent of its electricity from zero-carbon sources by then. The United States revealed a goal of cutting its emissions to 26 to 28 percent below 2005 levels by 2025. (Not every major emitter made as significant an announcement: India, for example, proposed to lower its carbon intensity to a level that most expect will require no new effort and set renewable energy targets that few believe can be achieved.) In many cases, such as with U.S. regulations on power plants, those efforts have already set policy in motion. These plans won’t be revisited or renegotiated at Paris. In that sense, then, the toughest work is already done.

Tune Out Most of the Drama

That doesn’t mean those following the talks won’t see a lot of fights during Paris. In fact battles are guaranteed. They’ll hear about clashes between Europeans and Americans over whether a Paris agreement should be legally binding. They’ll hear arguments break out over  what the right long-term goal for climate action should be. They’ll hear debates about how to transfer intellectual property to help poor countries develop low-carbon technology.

Observers can ignore almost all of these. In some cases that’s because the countries raising the objections are ultimately unwilling to fall on their swords. Small island states, for example, won’t blow up an otherwise attractive deal over a fight about what the right aspirational temperature target ought to be. More important, though, many of these fights are essentially staged. Often, negotiators have resolved an issue privately, but still want to make a show of standing their ground to satisfy political needs at home.

For example, when European leaders insist that a deal legally bind each country to their promised emissions cuts, they know that their demand is unworkable for the United States—and both they and their American counterparts know that they’re ultimately going to concede. But they’ll still press their case publically for the crowd back home. Many reporting from the talks, looking for some drama amid a long two weeks, will still warn of impending collapse.

Just because many of the battles in Paris won’t amount to much, though, doesn’t mean that none of them matter. One in particular stands out: a clash over money.

The 2009 Copenhagen climate summit turned on money. Even after the countries agreed on emissions cuts, technology cooperation, and the legal form of the agreement, an impasse between wealthier and poorer countries remained. It was broken when the richer countries pledged they would aim to raise $100 billion a year by 2020 to help poorer countries cut their emissions and adapt to climate change. At that point, developing-country solidarity fractured, allowing an agreement to be reached.

In a sense, the biggest indicator of ‘success’ in Paris is it being seen as a success, and the biggest sign of ‘failure’ is if Paris is seen as a failure.

In the intervening years, richer countries have made large steps to help poorer ones grapple with climate change. But the world isn’t on track to meet the $100 billion goal. A recent OECD report implied that developed countries are now “mobilizing” $62 billion  annually to help developing countries—and the flows they measured are undoubtedly significant. But the way the OECD measures mobilized money is fundamentally different from what most countries’ diplomats had in mind when they accepted the offer at Copenhagen. Leaders from poorer countries may choose to ignore that, but that will be a high-level political decision, and if they choose not to let the discrepancy slide, there could be pitched conflict.

What happens if they don’t let the wealthier countries off the hook? Negotiations could focus on concrete measures to bridge the gap to the 2020 target. They could also focus on mobilizing money beyond 2020 to help developing countries, many of which, after all, are proposing as part of Paris to cut emissions more after that year. If countries can’t come to some agreement on this front, there is a real change Paris could fail to reach an accord.

Paris Is Too Big to Fail

Failure to reach a deal in Paris could be disastrous, but not for the reason many might intuitively think. Leaders will mostly still try to pursue their national emissions reduction goals even if Paris is a seen as a flop. But the political environment in which they try to do that will be strongly influenced by the Paris outcome. Paris has been built up, around the world, as a critical moment for confronting climate change. If the public views Paris as a success, that will make climate action more politically palatable, since policymakers and businesspeople who want to cut emissions will be able to point to the Paris outcome as evidence that low-carbon development is the way of the future. Conversely, if Paris is seen as a failure, those opposed to steering in a low-carbon direction will wield it as evidence that they’re simply avoiding an unwise and unpopular path. In a sense, then, the biggest indicator of “success” in Paris is it being seen as a success, and the biggest sign of “failure” is if Paris is seen as a failure.

The experience of the Copenhagen summit and the one that followed a year later, in Cancun, is instructive. The two resulted in substantively similar outcomes. But Copenhagen was painted as a disaster and Cancun portrayed as a breakthrough. After Copenhagen, the climate world despaired; after Cancun, there was new energy.

This means that the global media will play an unusually important role in shaping the Paris outcome. If Paris is measured against whether it saves the world, or at least deals with the climate problem once and for all, it will inevitably be judged a failure, since no summit or international agreement can do that. If it is assessed more realistically, though, it has a fair and deserved shot at being labelled a success.

A Successful Paris Summit Should Be a New Beginning

That cuts back to the heart of climate policy: every policy development, no matter how hyped, is only one piece of a bigger puzzle. Dealing with climate change will involve countless distinct steps taken in dozens of countries and international institutions over decades. Most important will be national policies in major emitters that change incentives for producers and consumers of energy. Paris will be a success if it makes those steps easier and more likely. (It will even be a partial success if it merely doesn’t get in the way, as, arguably, some past international agreements have.) It is somewhat absurd that the world has renegotiated the fundamental architecture of international climate action five times in barely twenty years—first with the UNFCCC, then Kyoto, followed by a period of drift in the 2000s, then Copenhagen, and now Paris. If Paris can produce a sound and flexible architecture, which is what its conveners appear to be aiming for, that doesn’t get rewritten again in five years, that will be an important step forward. The world can then focus on actually getting emissions cuts done.